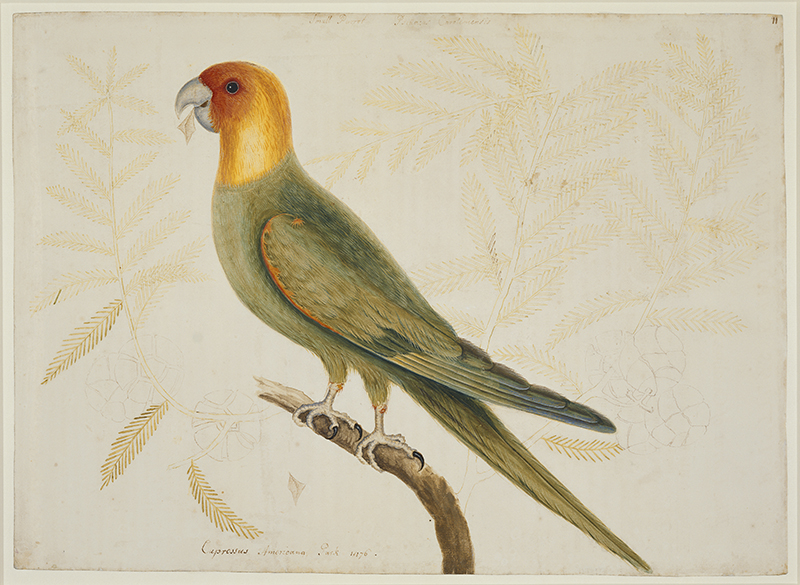 Not sure if you’ve seen it, but David Attenborough, ninety-five years young, has just released another nature documentary. (They seem to come as regularly as the seasons.) This one is called Life in Color, and examines the many chromatic aspects of animal behavior: mating, intimidation, hunting, hiding, and more. We hear Attenborough’s characterful voice throughout, and sometimes glimpse him, too, strolling through flowery meadows or shrouded in a bright red parka against snow-covered mountains, at this point a natural marvel in his own right. There’s never been anyone like him.

Or has there? I recently spoke to Henrietta McBurney, author of the new book Illuminating Natural History: The Art and Science of Mark Catesby, and she observed that what Attenborough is doing for today’s audiences, her subject did for the eighteenth century. Between 1729 and 1747 Catesby presented his Natural History of Carolina, Florida, and the Bahama Islands in successive parts to the Royal Society in London—whose secretary proclaimed it “the most magnificent work I know since the Art of printing has been discovered.” One might or might not agree with that, but it is certainly beautiful and impressive, and also groundbreaking: the first major visual survey of flora and fauna of North America.

Catesby was also a pioneer in other ways. Like Attenborough, he ventured out into the field, examining plants and animals up close and personal. He also developed exciting new ways to show others what he had seen. Life in Color features snazzy specialized camera technology that approximates the vision of animals that can perceive ultraviolet or polarized light. Three centuries ago, Catesby’s images were equally novel, arresting, and immersive. The very first plate in Natural History shows a bald eagle (still some decades away from its elevation as the symbol of the United States) plunging after a fish; another bird of prey—an osprey, or “fishing hawk,” as Catesby called it—looks on from the middle distance. The accompanying text explains the startling drama unfolding, describing how the eagle goes about stealing a fish from the osprey: “at him furiously he flies: the Hawk mounts, screaming out, but the Eagle always soars above him, and compels the Hawk to let it fall; which the Eagle seldom fails of catching, before it reaches the water.”

Behind this narrative sensibility lay a genuine scientific insight. Catesby was among the first to see (and show) the subtle connections and interdependencies between many forms of life. He did not see the constant change in the natural world as a whole—Darwin was still a century off—but at smaller scale he depicted it as a dynamic system. McBurney notes that the only real precedent for this was the work of Maria Sibylla Merian, a naturalist from Frankfurt who defied all expectations of her gender, sailing to Suriname in 1699 to undertake study of insect life there. Merian’s Metamorphosis insectorum Surinamensium, published in 1705, shows butterflies, caterpillars, and beetles in their natural micro- habitats, crawling along the specific plants that they did in nature.

Catesby applied this same relational logic to the whole natural world. Like Merian’s insects, his birds, snakes, and mammals are typically shown with their preferred habitats, which occasionally serve as the theatrical sets for agonistic struggles between predator and prey. He had interesting reasons for developing this approach. Amy Meyers—until recently, the director of the Yale Center for British Art, and a longtime colleague of McBurney’s, who has been researching the intersection of art and natural history throughout her career—points out in her coedited volume Empire’s Nature: Mark Catesby’s New World Vision (1998) that Catesby was motivated to think about ecosystems (as we would now call them) partly because of his involvement in transplantation. Beginning with his first trip to the Americas—he was in Virginia from 1712 to 1719—he relocated trees from the frontier to plantations, and sent seeds back to his contacts in England, so they could be propagated in gardens. (He also sent meticulously prepared dry specimens, which still survive at the Natural History Museum and Oxford University.) This activity prompted him to think about what happened to the health of plants when they were removed from their native habitats. This practical consideration, Meyers observes, helps to explain how he arrived at his images, which are “complex studies of organic interaction.”

To communicate this idea on the page, Catesby had to get creative. McBurney rightly emphasizes the difference between working out in the field—a taxing, sometimes dangerous, and chaotic experience—and the diagrammatic clarity of the plates in Natural History. This is partly just a matter, again, of decontextualization. The blank backdrops of his images, which make them look a little like his paper-mounted specimens, focus attention on particular moments of interaction between fauna and flora. But it’s also a matter of artful composition. Catesby necessarily had to orchestrate his own observations at different times, partly drawn from memory. He also, a little surprisingly, incorporated existing images from existing print sources. That bald eagle so furiously flying, for example, is closely based on an image he found in a 1703 edition of Aesop’s Fables.

This aspect of Catesby’s practice may again remind us of Attenborough’s—whose documentaries are, among other things, feats of editing, in which the “best” moments from days’ worth of shooting are montaged into a single satisfying tale. Here, too, there is a philosophy at work, or perhaps better to say, a pretense. Animals and plants have no sense of dramatic tension; the world is not really a stage. Catesby doubtless saw this clearly. But he also seems to have intuited—and here, perhaps, was his most prescient insight—that it would be quite helpful to render it as if it were.

His immediate goal was to gain patronage, and in this he was successful both in his own time and posthumously. He died in 1749; his original drawings for Natural History were purchased by George III in 1768 and still reside in the Royal Library at Windsor Castle. Today, all these years later, they still arrest the imagination—and all the more so given our changed relationship to the environment. McBurney stresses that Catesby himself had no sense of the natural world as fragile. How could he have, given the seemingly boundless vitality of the “new world” he was encountering? (That is a total misnomer, of course; he depended on Native American people to guide and assist him in his work, and they were drawing on centuries of local knowledge.) Yet as another scholar, Alan Brush, has written, to look at Catesby’s images now is to witness the poignant remnants of a bygone age. He lovingly rendered species such as the ivory-billed woodpecker, the Carolina parakeet, and the passenger pigeon, all of which are extinct today.

One reason this tragedy has come about is indifference to the delicately balanced ecosystems that Catesby explored and first brought to attention. Another, perhaps, is that we haven’t learned his other great lesson: we can see nature only from a human perspective. We may look for profit or for wonder, but it’s unavoidable that we will see it in our own terms. Catesby was one of the wonderers. So, too, is Attenborough, and he has been devoting segments of his documentaries, and sometimes whole episodes, to the realities of climate change. He is among our most effective public advocates for conservation, not because he’s a scientist but because he’s a storyteller. Catesby was both. But it was arguably his artistry that left the greater legacy. How we treat nature depends very much on how it’s shown to us. Long before film, before photography, Catesby gave us life in color. And in his beautiful pictures, there’s still so much to see.

Individuals can use the code YEINH to receive 20% off their copy of Illuminating Natural History: The Art and Science of Mark Catesby, through yalebooks.com or by calling Triliteral: 1-800-405-1619.