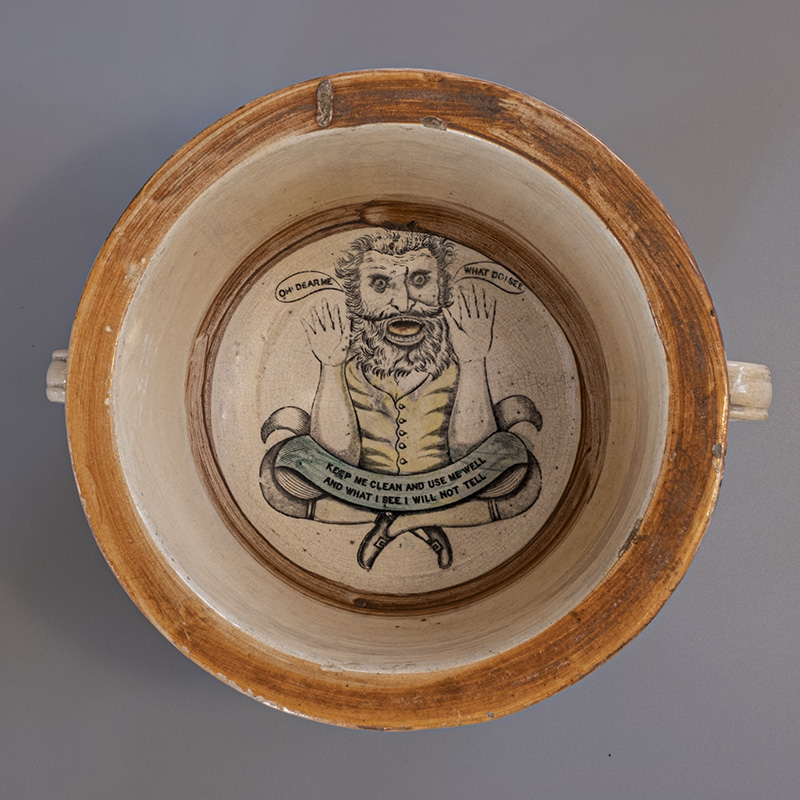 When was the last time you laughed at an object that was more than a hundred years old? I mean really laughed. Not a wry smile, a chuckle, a shake of the head, but an actual out-loud, just-can’t-help-it guffaw. If you’re like me, it’s been a while. Many aspects of antiques—their beauty, their craftsmanship, their inherent human interest—are timeless. But humor? Not so much.

Consider the lowly chamber pot. It was among the most potentially amusing artifacts in an early European or American home, and potters knew it. They made chamber pots with toads crouching inside, or the likenesses of politicians peering upwards. One chamber pot, made in Britain in the 1840s, bears the legend “Keep me clean and use me well, and what I see I will not tell.” It is also decorated with the image of a man on the bottom of the bowl—his eyes wide in alarm, hands raised beseechingly—crying out “OH DEAR ME/ WHAT DO I SEE.”

That’s not entirely unfunny, I guess, but it’s still difficult to retrieve the hilarity that these artifacts once evidently prompted. The same goes for other antiques that once apparently seemed hilarious, like puzzle jugs, which have piercings that frustrate attempts to drink from them (spoiler alert: in most cases, the handle can be used as a straw), or jugs representing the practice of bear-baiting. Other historic artifacts that were originally intended to be entertaining are now anything but. They reflect period attitudes to race and gender that are, to the contemporary viewer, profoundly offensive.

There’s a broader phenomenon at work here, which we might describe as the cultural relativism of humor. Friedrich Nietzsche once wrote, “when nothing else today has a future, perhaps it’s our laughter that has one!” Sadly, he was wrong. Very little gets older faster, than a joke. That holds true not just for objects, but culture in general. Go much earlier than the alwaysreliable Oscar Wilde (“I have always been of the opinion that hard work is simply the refuge of people with nothing whatever to do”), and things get downright bewildering. Joe Miller’s Jests; or the Wit’s Vade-Mecum, first published in 1739, was wildly popular in its day— so much so that well-traveled jokes were sometimes known as “old Joes.” The actual Joe Miller was a recently deceased stage actor with a notoriously poor sense of humor—so the title of the book is itself a witticism we don’t get today. Paging through the volume is a fairly puzzling experience:

Lord R—, having lost fifty pistoles one night at the gaming-table in Dublin, some friends condoling with him upon his ill luck: Faith, said he, I am very well pleased at what I have done; for I have bit them, there is not one pistole that don’t want six-pence of weight.

When you’re done drying your eyes, try this:

A parson preaching a tiresome sermon on happiness or bliss; when he had done, a gentleman told him he had forgot one sort of happiness: Happy are they that did not hear your sermon.

You can just about get that one into focus, but it’s hardly side-splitting stuff.

It’s easy to see why humor dates so quickly. The trigger to getting a laugh—that moment of surprise, that sudden rush of the absurd—usually involves a form of spontaneous recognition. And that, in turn, requires a shared frame of reference. Stand-up comedians and late-night TV hosts refer to current events— and sex—because it’s what was already on their audience’s collective mind. So, while there are certainly some jokes built to last the test of time (“a skeleton walks into a bar and orders a beer . . . and a mop”), most of them end up rattling around in the desk drawer of culture, like so many pistoles and sixpences.

But maybe there’s another way of thinking about yesteryear’s humor; maybe it should interest us precisely because it doesn’t translate. As much as we might look for commonalities with the past, it’s actually a sense of distance that can make a culture’s preoccupations come alive. Take for example William Hogarth’s print The Five Orders of Periwigs, first circulated in 1761. It mocks the pretensions of the aristocracy and clergy by arranging their wigs into classifications in the style of Vitruvius: the Old Peerian or Aldermanic, Composite or Half Natural, and Queerinthian. Hogarth also takes a wicked swipe at the ponderous scholarship of the day, promising that “in about seventeen years will be completed, in six volumes . . . the Perriwigs [sic] of the Ancients.” While not actually all that funny (at least to me), the satire is nonetheless remarkably on-point. If I were setting out to teach students about the interlinked themes of class and classicism, I’d be more apt to use this print than the Apollo Belvedere.

Satirical prints by the likes of James Gillray or Thomas Rowlandson, similarly, can initially feel rather remote, or simply cruel. But there is so much to be pulled out of an image like Rowlandson’s New Invented Elastic Breeches (1812), which depicts an overstuffed gentleman being stuffed, in turn, into new-model tight trousers. It’s a literal depiction of fashion’s pressures, laced with the anxiety of rapid generational change: a glimpse into the psychological effects of early-onset modernity.

The scatologically themed objects of earlier centuries are equally alien: portals into a wholly other world. They remind us that people did, in fact, live nose-to-nose with their own effluvia, and those of total strangers too. We easily forget that in a time without plastic buckets or sewage systems, a glazed ceramic pot was the apex of hygiene. “Matter out of place” (to quote the anthropologist Mary Douglas) was everyplace. Rowlandson, in his 1789 print Outré Compliments, captured what must have been a very typical street scene, with two swells exchanging greetings, and a maid emptying a bedpan from a nearby window. “Regardless of what passes when gentlemen meet,” runs the caption, “Thick and thin poured the chamberpot into the street.”

Small wonder that people liked their chamber pots delivered with a sense of humor intact. Back in 2011, the Wellcome Collection in London put together a brilliant exhibition called Dirt, which examined the unsanitary conditions that human beings endured in the past (and much of the contemporary world). It also explored the lengths people will go to in order to keep clean. It was a revelatory project, casting familiar genre images of maids doing laundry into a new light. The show was subtitled The Filthy Reality of Everyday Life, which just about captures it. Fanciful chamber pots captured the reaction that people had to that reality. It was, quite literally, a matter of grinning and bearing it. This is just one example, but it indicates the general idea. When someone from the past made a joke, and we don’t get it, there’s probably a lot more we’re not getting, too. “It is a curious fact,” Wilde once wrote, “that people are never so trivial as when they take themselves very seriously.” He was right as usual—but the reverse is just as true.