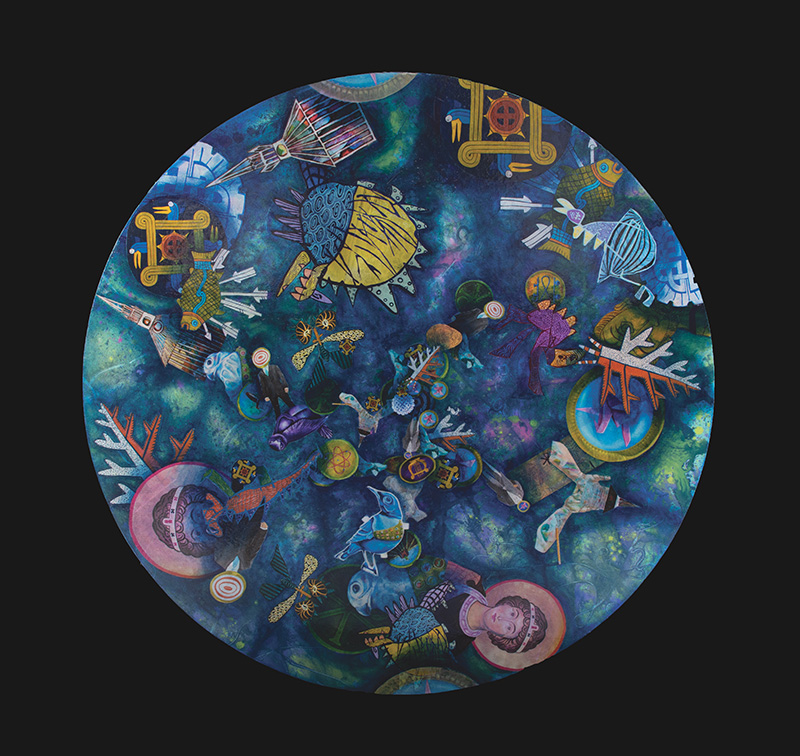 What would burn, they burned. They crushed the rest underfoot. And when they were done, they blew up the whole thing with dynamite.

The year was 1935. The setting, just a few miles outside of Spiro, Oklahoma. Centuries earlier, indigenous Americans had invested this site with great spiritual significance. On top of a sacred mound built by their own ancestors, they constructed a hollow chamber and placed within it a cache of valuable objects: textiles, engraved shells, copper axes and plates, wooden sculptures, large-scale effigy pipes. This “King Tut’s Tomb in the Arkansas Valley” (as one 1930s newspaper put it) was one of the most important archaeological repositories in America, indeed, the world. Yet it was all but completely destroyed in a moment of casual vandalism.

How did this terrible incident occur? Why don’t you already know about it? And what stories can this desecrated ancient site still tell? Spiro and the Art of the Mississippian World, an exhibition at the National Cowboy and Western Heritage Museum, in Oklahoma City (opening February 12), aims to explain all this. It’s a project that focuses our attention on the longer arc of human history, and how easy it is to lose our place in it.

The astounding contents of the Spiro Mound were rediscovered in 1933, in the depths of the Great Depression. The site had previously been farmed by members of the Choctaw and Chickasaw nations, and formerly enslaved African Americans, without disturbance to the historic deposit. But in 1933 a small band of men calling themselves the Pocola Mining Company gained access to the site. They were led by W. G. Cooper, a speculator “familiar with the business of commercial exploitation of prehistoric remains,” in the words of University of Oklahoma anthropologist Forrest E. Clements. Together with his associates, most of them in their twenties, Cooper began tunneling into the mound. They quickly began unearthing ancient artifacts, which they promptly sold on the “curio market” (as it was then called).

As soon as Clements became aware of this situation, he pleaded with Cooper and his men to slow their digging, and leave the central cavity of the mound unmolested. He also lobbied the Oklahoma state government to pass legislation protecting archaeological antiquities (among the nation’s first). Cooper and his men ignored all this, and when a law was duly passed in 1935, they ignored that too. Sheriff’s deputies were dispatched to order them to cease and desist. The Pocola gang decided to cut and run. They dug out everything they could and then, apparently out of sheer spite, destroyed what they could not carry away.

When Clements arrived at the site, he was shocked to see that the mound had been “tunneled through and through, gutted in a frenzy of haste. . . . Sections of cedar poles lay scattered on the ground, fragments of feather and fur textiles littered the whole area; it was impossible to take a single step in hundreds of square yards around the ruined structure without scuffing up broken pieces of pottery, sections of engraved shell and beads of shell, stone, and bone. The site was abandoned; the diggers had completed their work.” Though heartbroken, he set to work, instigating a campaign of systematic archaeological study, funded in part by the Works Progress Administration. They did recover more artifacts, still buried safely in the earth. These finds, together with artifacts that had been looted but eventually made their way to museums, are gathered for the first time in Spiro and the Art of the Mississippian World.

It’s a tragic story, to be sure. But as the exhibition makes clear, even the dynamiting of the repository did not fully obscure its original glory. Eric Singleton, the curator of the project, says that if the looters had not destroyed the site, “it would have fundamentally changed our understanding of ancient America.” Even so, it is possible to see that the Mississippian culture (the term refers to the indigenous peoples who lived along the great river from, per the museum, about 800 to 1600) rivaled the Aztec, Inca, and Maya. When interred, Singleton says, the mound’s contents would have been “shimmering and lush”—glorious textiles, obsidian from the central valley of Mexico, copper from the Great Lakes region, and no less than thirteen thousand river pearls, demonstrating the culture’s extensive trade network, as well as its proficient craftsmanship.
Why would the Spiro people have placed such wealth below ground, never to see it again? Singleton has a theory about this—one that makes this ancient culture’s experience seem strangely resonant with our own. He believes that the interment was “a ritual to restart time” at a moment of crisis. The Mississippians were undergoing an ecological catastrophe, as the climate steadily cooled over a period of centuries, from about 1350 to 1650. This phenomenon, the so-called Little Ice Age, brought frequent drought to a society dependent on maize and other crops. The objects found at the Spiro Mound often feature imagery symbolizing creation mythology, and emblems of rebirth or regeneration (an example is the deity Morning Star, who is represented on one of the clay effigy pipes). “What do you do when the world is in upheaval?” Singleton asks. “Today we turn to science; they used religion. And you cannot separate religion and reality in native North America.”

Thus, the story of the Spiro Mounds has an intriguing shape, punctuated by three moments of crisis. The ancient culture, facing an existential threat, dedicated itself to a massive effort, directed to making a better future. In the harrowing depths of the Depression, there was a failure of stewardship, abetted by a lack of respect for indigenous people. Indeed, as Singleton points out, the great mounds were often thought to be the work of a lost tribe of Israel, or perhaps Vikings, or Egyptians: “anyone but Native Americans.” This was a forceful act of forgetting, a refusal to accept that this continent, just like Europe, had its own classical civilization.

Today, as America grapples with a pandemic and the prospect of another ecological disaster, the works of the Mississippians are once again venerated. But of course, the native people of the region never forgot. The exhibition concludes with a section of works by contemporary artists of indigenous background, many of which incorporate motifs and ideas from the Spiro culture. One painting, by the Chickasaw-Choctaw artist Erin Shaw, is a gentle manifesto of inclusivity. Entitled Everything Belongs, it depicts a cosmic swirl of figures and objects, all rendered in jewel-like polychrome. Christian and indigenous symbols float alongside one another in a single, shared, celestial realm. The image captures the psychological complexity of twentyfirst- century identity; as Shaw puts it, “My work—my own life, to be honest—is vested [in] places of paradox and unanswered questions, the places of chaos as well as silence.”

The looting and destruction of the Spiro Mound was one of the worst cultural disasters in US history, all the more appalling because it was part of a much broader pattern: a campaign of aggressive amnesia, in which native precedence was systematically obscured. We can’t undo those mistakes. But we can hold on to what is left, do our best to piece the story together out of its fragments. In this effort, Shaw’s Everything Belongs could be taken as a map of sorts. For, in the context of the Spiro exhibition, the painting comes to look like an archaeological site in itself: a layered cultural deposit in which things jostle together. There may be gaps and missed connections all over, but everything still finds a place.