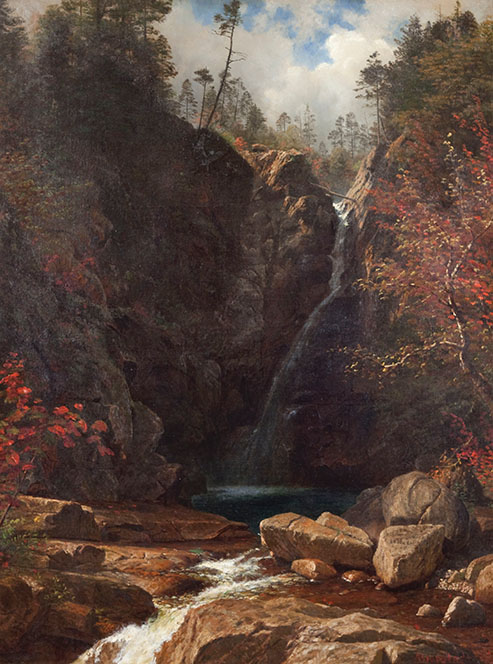 Since the early nineteenth century, Mount Washington, the highest peak in the northeastern United States at 6,288 feet, has played muse to some of America’s most famous artists, including Thomas Cole and Albert Bierstadt. Dramatic views of the “Crown of New England” rendered by painters and photographers helped spur the growth of scenic tourism in New Hamphire’s The White Mountains, which rivaled Niagara Falls in popularity. By 1837 the Mount Washington House hotel charged $1.50 a night, and a trip on horseback to within three hundred feet from the summit could be had for $3.00—tidy sums in those days.

The Coolest Spot in New England—Summit of Mount Washington, after Winslow Homer, 1870, from Harper’s Bazar, July 23, 1870.

The Currier Museum of Art will celebrate they heyday of the summit’s allure for both artists and sightseers this fall with the exhibition Mount Washington: The Crown of New England. The show will include works by artists of the Hudson River school and other painters, Winslow Homer and George Inness among them. The exhibition also contains objects and ephemera related to the mountain, such as guidebooks, scientific illustrations, advertisements, souvenir dishes, and vintage photographs, and engravings—like one from the July 1870 issue of Harper’s Bazar that shows fashionably dressed tourists at the breezy summit, labeled The Coolest Spot in New England. As the Currier hopes to demonstrate, it still is.