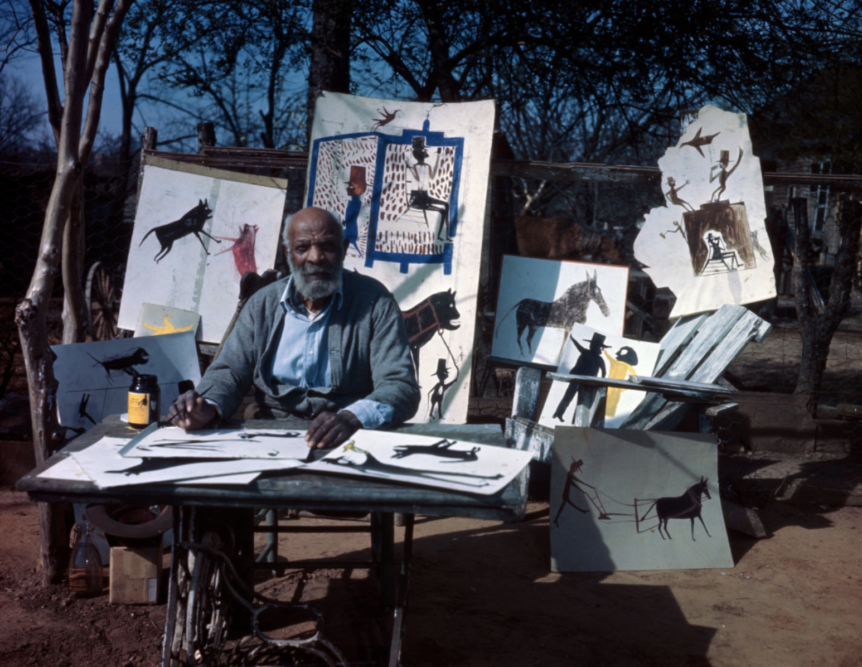 In April of 1853 a child was born into slavery on an Alabama cotton plantation owned by George Traylor. His first name was Bill and he would take the plantation owner’s last name for himself. A sharecropper and laborer for most of his life, in the decades since his death in 1949 Bill Traylor has become known to the world as an artist. Now, a new documentary tells Bill Traylor’s story on film for the first time. Ben Miller speaks with executive producer Sam Pollard and director Jeffrey Wolf about Bill Traylor: Chasing Ghosts, distributed by Kino Lorber and available in virtual theaters via Kino Marquee.

Bill Traylor: Chasing Ghosts is director Jeffrey Wolf’s second feature length documentary. He made the acclaimed documentary James Castle: Portrait of an Artist, an award-winning film that delves into the life and creative process of the artist James Castle, with testimonials and input from family members, artists, and members of the deaf community. Wolf has also made short films about the artists James “Son Ford” Thomas, Martin Ramirez, Elijah Pierce, and Gregory Van Maanen. As a writer, his articles and art reviews have appeared in many magazines and catalogues. His photographs have been included in numerous publications. As a feature film editor, Wolf is recognized for his film work with prominent directors such as Arthur Penn, Sidney Lumet, Leslye Headland, John Waters, and Ted Demme. Films include The Ref, Beautiful Girls, Holes, and Life, among others.

Executive producer Sam Pollard is an accomplished feature film and television video editor, and documentary producer/director. Between 1990 and 2010, Pollard edited a number of Spike Lee’s films:  Mo’ Better Blues, Jungle Fever, Girl 6, Clockers, and Bamboozled, and co-produced with Lee a number of documentary productions for the small and big screen. As producer/director, since 2012 Pollard has completed Slavery By Another Name, August Wilson: The Ground On Which I Stand, and Two Trains Runnin’. In 2019 Pollard co-directed the six-part series Why We Hate that premiered on the Discovery Channel. In 2020 he was one of the directors on the 2020 HBO Series Atlanta’s Missing and Murdered: The Lost Children, and he also completed MLK/FBI, which premiered at the 2020 Toronto Film Festival and the New York Film Festival.