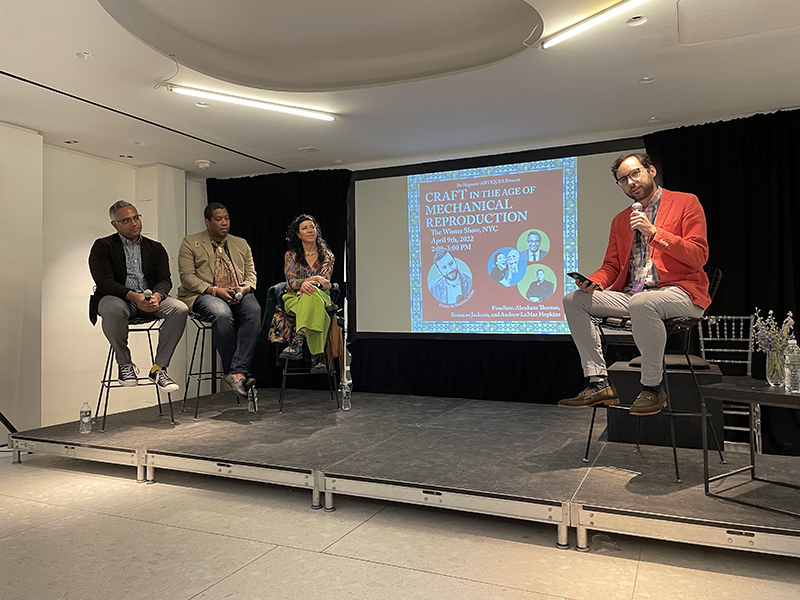 In this special bonus episode of Curious Objects, Metropolitan Museum of Art curator Abraham Thomas, ceramist Roxanne Jackson, and painter Andrew LaMar Hopkins join host Benjamin Miller onstage at the 2022 edition of the Winter Show to grapple with the legacy of Walter Benjamin’s famous 1935 essay “Art in the Age of Mechanical Reproduction.” How have Benjamin’s contentions about “aura” fared in the ensuing eighty-odd years since its publication? And how might we apply his thoughts on art to works of craft being produced today?

Roxanne Jackson’s macabre works are black-humored investigations of the links between transformation, myth and pop-culture. She has shown extensively in New York, and her work has been exhibited abroad at DUVE Berlin Gallery (Germany), the Schlossmuseum (Austria), Cob Gallery (London), Anonymous Gallery (Mexico City), at Design Miami, and elsewhere. She looks forward to a solo exhibition this fall at The Hole NYC.

Abraham Thomas is the inaugural Daniel Brodsky Curator of Modern Architecture, Design, and Decorative Arts in the Metropolitan Museum of Art’s modern and contemporary art department. During his long and distinguished career in the fine and decorative arts field, Thomas has held posts at the Smithsonian Institution (senior curator at the Arts and Industries Building), Sir John Soane’s Museum (director), and the Victoria and Albert Museum (curator of designs). Thomas has published and lectured extensively on architecture, decorative arts, craft, graphic design, and photography, his research focusing on the nineteenth century to the present.

Andrew LaMar Hopkins is a self-taught painter who specializes in nineteenth-century interior scenes and architectural set pieces based on the histories of Creole people in New Orleans, the city he has called home for over a decade. Drawing from his personal history and his expertise as an antiquarian, Hopkins carefully researches the architecture, material culture, and daily life of Creole populations in southern cities circa 1830. Hopkins deconstructs and reimagines an idealized antebellum history of Southern port cities—often injecting overtly homosocial scenarios or obvert references to queer culture, that excavate the often repressed histories of LGBTQ people in the antebellum south. Likewise, these queer characters echo Hopkins’s own biography and his parallel practice as a drag queen: his alter ego, Désirée Joséphine Duplantier, is a retro grande dame from New Orleans.