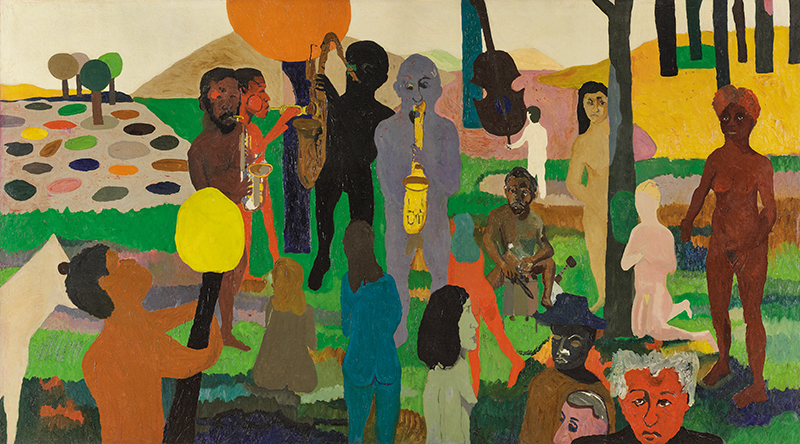 The artist Bob Thompson died in 1966 at the age of twenty-nine, but despite a tragically short life he managed to develop a distinctive painting style. He employed expressive brushwork and vivid colors to create figurative scenes that took their compositional cues from the Old Masters. It was a bold aesthetic strategy at a time when abstract art ruled the day.

The Colby College Museum of Art in Waterville, Maine, will host the debut of a traveling retrospective exhibition of the work of Thompson, who was a sensation in the New York art world of the early 1960s, yet is now largely forgotten. Born in Louisville, Kentucky, Thompson began studying and making art in part as a way to cope with the lingering depression brought on by the death of his father in a car crash. After attending the University of Louisville, and summering at the art colony of Provincetown, Massachusetts, Thompson moved to New York and quickly entered the city’s bohemian art scene. He became friends with fellow artists such as Red Grooms, Mimi Gross, and Allan Kaprow; with poets Allen Ginsberg and LeRoi Jones (later known as Amiri Baraka), and jazz musicians like Ornette Coleman and Charlie Haden. Their world imbued him with a sense of brio and spontaneity that Thompson tempered with the disciplined formalism of the Renaissance and baroque art he revered.

While he was a prolific artist who produced upward of a thousand canvases, discipline was sadly lacking in other areas of Thompson’s life, much of it spent on drink and drugs. With the help of foundation grants, Thompson traveled throughout Europe in his final years, broadening his exposure to the Old Masters. While in Rome, he underwent emergency gallbladder surgery. Rather than rest and recuperate as doctors advised, Thompson resumed his dissipated ways and within a few weeks he passed away.

After its run at Colby, the exhibition will travel to the Smart Museum of Art at the University of Chicago, the High Museum of Art in Atlanta, and the Hammer Museum in Los Angeles.