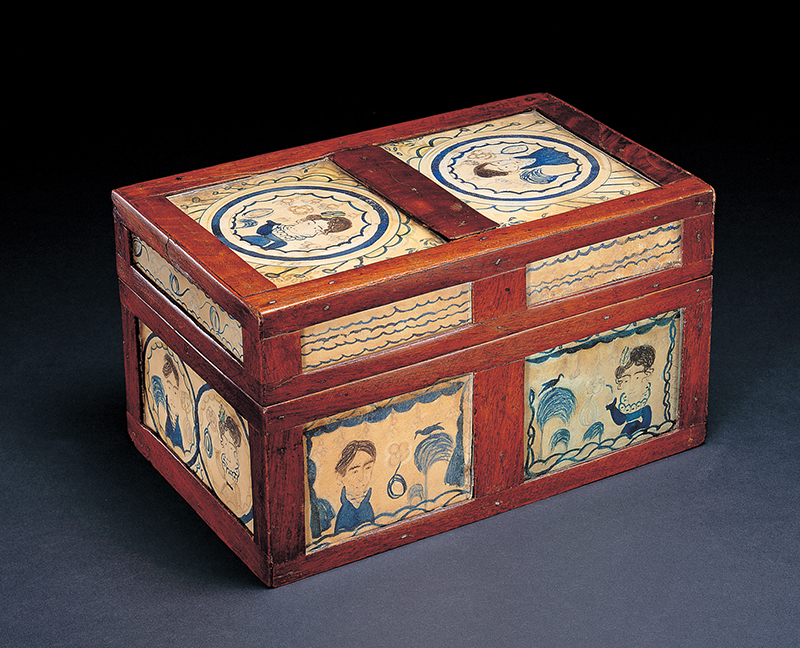 First chartered in 1961, the American Folk Art Museum in New York is celebrating the start of its seventh decade with a wide-ranging, power-packed exhibition. AFAM likes to describe itself as a “collection of collections,” and the new show, entitled Multitudes and curated by Emelie Gevalt and Valérie Rousseau, reflects the brilliance, breadth, and depth of the museum’s holdings.

The art and objects in Multitudes are arranged thematically and by type. There’s an excellent group of trade signs and figures—including a mid-nineteenthcentury hanging sheep sign that must have looked even more striking with its original covering of gold leaf. There are also wonderful arrays of whimsy bottles— tiny glass vessels holding hand-carved figures and such, in the manner of ships in a bottle—and of wooden decoys and quilts. Some marvelous examples of schoolgirl crafts are also on view, notably a trinket box decorated with watercolor portraits under glass made around 1825 in Portsmouth, New Hampshire.

The wide world of self-taught art and art brut is represented by the work of well-known artists such as Bill Traylor, Martín Ramírez, and Henry Darger, along with the not-quite-as-famous— such as the Gullah artist Sam Doyle, the so-called “Electric Pencil” James Edward Deeds, and the prolific artist in many mediums, Eugene Von Bruenchenhein.

Many familiar favorites are featured in Multitudes, among them William Edmondson’s sculpture Martha and Mary, the multi-colored phrenological head by Asa Ames, and the beloved portrait Girl in Red Dress with Cat and Dog by Ammi Phillips. But to our eyes, the showstoppers are a pair of works new to the AFAM collection: a striking “pointing hands” quilt by an unknown maker in early twentieth-century Tennessee, and Ammi Phillips’s Portrait of Frederick A. Gale painted about 1815—a recent gift to the museum from collectors Lucy and Mike Danziger. Bravo to them, and long life to the American Folk Art Museum!