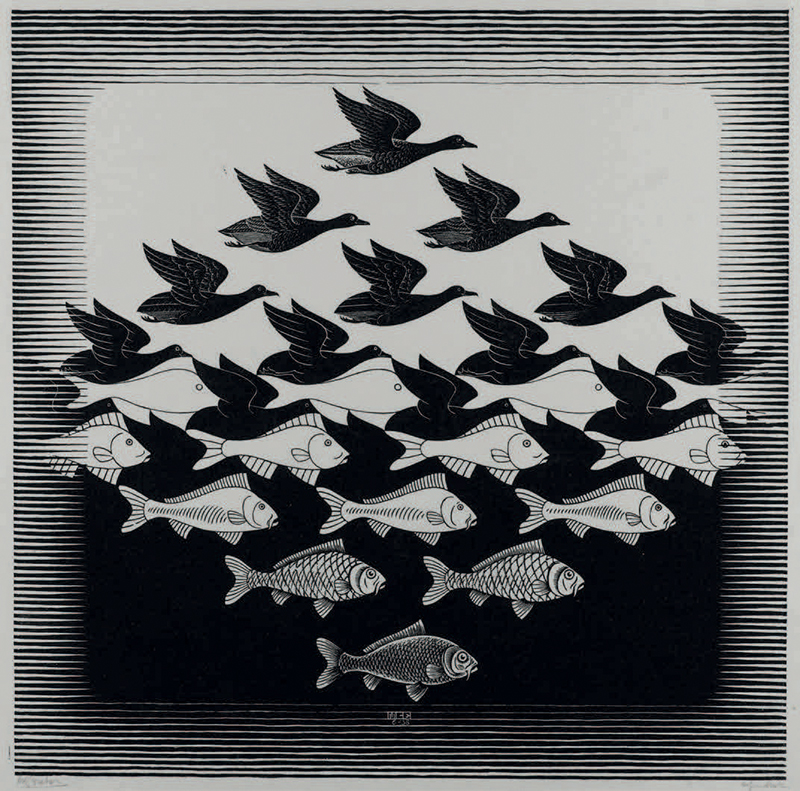 For many of those born late into the Baby Boom generation, the work of M. C. Escher might have provided their first experience of art. The Dutch graphic artist was marginalized for most of his career—he did not receive a retrospective exhibition in his homeland until 1968, at age seventy— but he burst on the scene with perfect timing. His mind-bending art—endless staircases that defy space and gravity, a pair of hands drawing each other with pencils, a couple whose faces spiral apart like an apple peel—was perfectly in tune with the psychedelic spirit of the Age of Aquarius. (A fact that did not particularly please the stodgy Escher; he bristled when Mick Jagger addressed him by his first name in a letter asking him to design an album cover for the Rolling Stones.)

Currently on view in Houston is a show that the Museum of Fine Arts touts as the largest and most comprehensive Escher exhibition ever presented, featuring more than four hundred prints, drawings, watercolors, textiles, and other works. It’s an appropriate scope for an artist who was ever-changing, never satisfied with the world as it is.

Maurits Cornelis Escher, born in 1898, the son of a civil engineer, was a sickly child and a poor student. He made a failed attempt to study architecture, but his promising aptitude as a draughtsman led him to graphic design. Even so, all he drew was off-kilter—for example, making landscapes from simultaneous, opposing perspectives, a view from above and below all at once. He invented fantastical creatures—centipedes with human-like faces; hybrid fish-airplanes—in answer to what he called his “inner visions.”

A breakthrough for Escher took place when he visited the Alhambra palace in Spain and made drawings of its intricate Moorish tiles. Their patterns inspired his tessellation artworks, composed of images that interlock seamlessly like the pieces of a jigsaw puzzle. It is these prints that inspired many a hippie epiphany. Please note: magic mushrooms are not on offer at the MFA Houston.