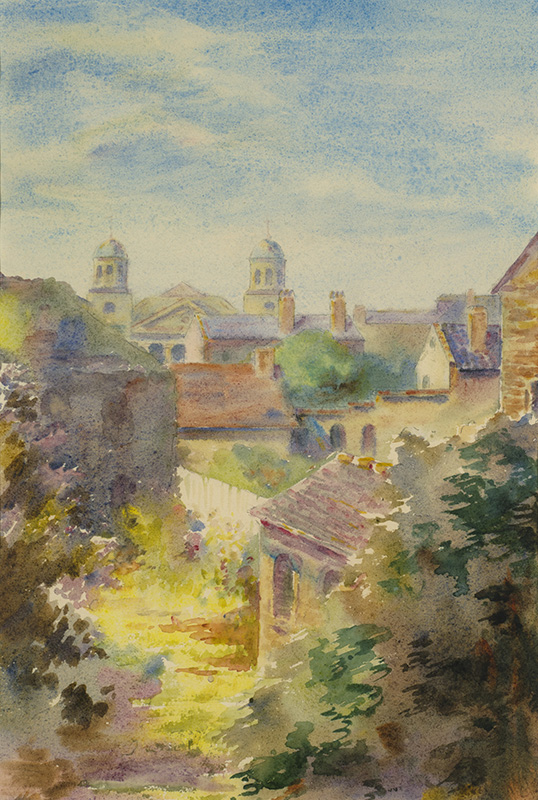 Today’s thriving arts scene in Charleston, South Carolina, and the city’s robust historic preservation movement both owe much to the efforts of Alice Ravenel Huger Smith. In the early decades of the twentieth century, the largely self-taught artist was one of the leading lights of what has become known as the Charleston Renaissance—a multifaceted cultural revival between the World Wars that breathed new life into a city left poor and moribund by the collapse of the rice-plantation economy.

Smith—a member of Charleston’s down-at-the-heels agrarian aristocracy—organized drawing and printmaking clubs, published illustrations of the city’s noble eighteenth- and early nineteenth-century houses and churches, and painted a large body of atmospheric watercolors that captured the almost mystical beauty of the swamplands and forests of the South Carolina Low Country. With her prints, books, and watercolors, which were exhibited and sold well in northern cities such as Philadelphia, Smith put Charleston back on the map as a cultural destination.
That legacy is being celebrated this spring with the publication of a new biography, as well as several related or concurrent shows of Smith’s art at venues in and around the city. The book, Alice: Alice Ravenel Huger Smith, Charleston Renaissance Artist (Evening Post Books), was a labor of love, written by Smith family friend Dwight MacInvaill, with help from two of Smith’s descendants, Ann Tinker and Caroline Palmer. They drew on previously unpublished letters, photographs, and other documents, as well as family memoirs and memories. Proceeds from sales of the book will benefit the Middleton Place Foundation, which maintains the Smith family plantation on the Ashley River where Alice frequently painted, and the Greek revival Edmondston-Alston House (another Smith property) in downtown Charleston.

In concert with the book launch, Middleton Place and the Edmondston-Alston House are jointly presenting a special exhibition of thirty-five works of art by Smith from private and public collections that are featured in the new biography. Beginning in July, the Florence County Museum in Florence, South Carolina, will host a show of Smith’s regional paintings. Lastly, thanks to a cousin who collected them, Smith developed a deep interest in Japanese woodblock prints. She learned the technique for making the prints, and used many of the representational strategies of the genre in her watercolors. The Gibbes Museum of Art is currently presenting a show that explores the influence of Japonisme on Smith and other artists of the Charleston Renaissance. All in all, it’s an Alice wonderland.

Japonisme in Charleston: Alice Smith and Her Circle • Gibbes Museum of Art, Charleston • to October 3 • gibbesmuseum.org