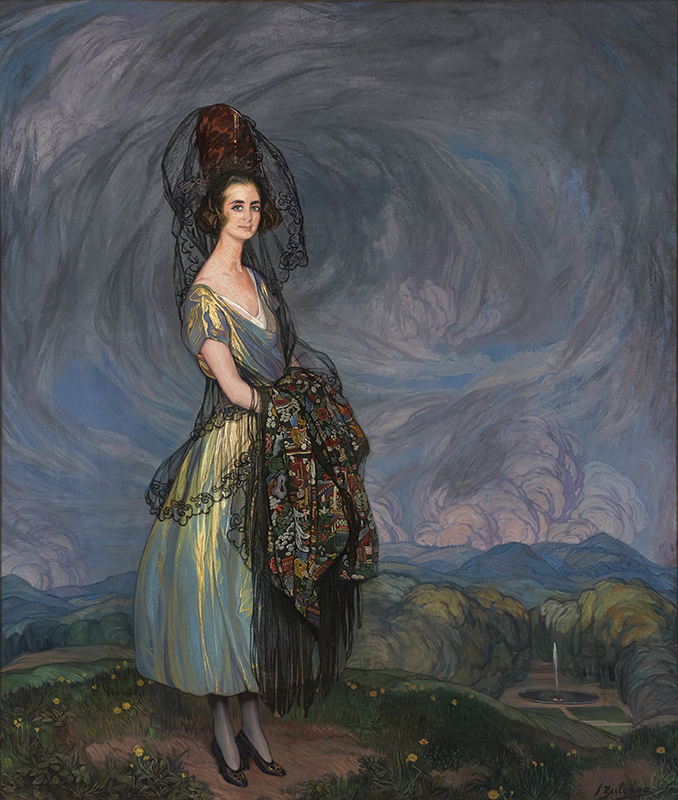 Though not as famous as the Prado and the Reina Sofia, Madrid’s Museo de Traje—or, Garment Museum—offers a full measure of cultural significance in a country where sartorial style has always been paramount for everyone from marquesas to matadors. While the museo is undergoing renovation, some of its collection is traveling in the exhibition Canvas and Silk: Historic Fashion from Madrid’s Museo del Traje, a joint effort with the Meadows Museum in Dallas. The show unites spectacularly preserved examples of historic dress with depictions of such costumes in fine art.

Elvira González, curator of the historic apparel collection at the Museo del Traje and co-curator of the exhibition, notes that this blend of mediums, which includes approximately forty artworks from the Meadows alongside roughly the same number of garments from the Museo del Traje, demonstrates “the complex relationship between representation and reality, between the image and the object, around different themes that illustrate various trends in the history of European clothing in general and Spanish clothing in particular.”

The exhibition’s three key themes are: “Precious Things,” “Traditional Dress,” and “Stepping Out.” In “Precious Things,” jewelry and combs made from costly metals and other rare materials such as coral take center stage, while “Traditional Dress” focuses on garments that typify conventional ideas of Spanish dress, such as traje de luces (literally “suit of light”—a bullfighter’s usual garb) and mantónes de manila (embroidered silk shawls that were historically traded through Manila under Spanish imperialism). “Stepping Out” rounds out the exhibition with an examination of how dress informed public and personal identity. For Meadows curator and exhibition co-curator Amanda W. Dotseth, the exhibition structure will “give the viewer a sense of what the artist was actually attempting to represent and to acknowledge that underlying each painting is a whole network of things that had to come together to make it possible.”

Thinking of fashion as an area of visual culture worthy of study—that is, as a scholarly discipline —is relatively new, and while the field distinguishes itself from fine and folk art, it still draws heavily on parallels and connections across all artistic spheres. The Meadows’s collection is uniquely poised for this collaboration with the Museo del Traje because of its rich collection of works by nineteenth- and twentieth-century Spanish artists such as Ignacio Zuloaga and Joan Miró, both of whom are represented in the exhibition.

Zuloaga’s The Bullfighter (El Segovianito) and Portrait of the Duchess of Arión, Marchioness of Bay feature in two critical pairings in the exhibition. The former illustrates a traje de luces in incredible detail and the latter depicts the duchess holding a mantón de manila as well as a lace mantilla and large comb (peineta), all of which have physical historical examples accompanying them.

Miró’s work Queen Louise of Prussia is shown alongside a painted dress and shoes by the twentieth-century Spanish designer Manuel Piña, whose work not only mirrors that of Miró, but reflects the influence of the Spanish avant-garde on all areas of visual culture. Contemporary Spanish designers, such as Agatha Ruiz de la Prada, continue to weave the surrealist thread laid down by Miró and his contemporaries, and those with a keen eye for style and form will undoubtedly find the connections compelling.