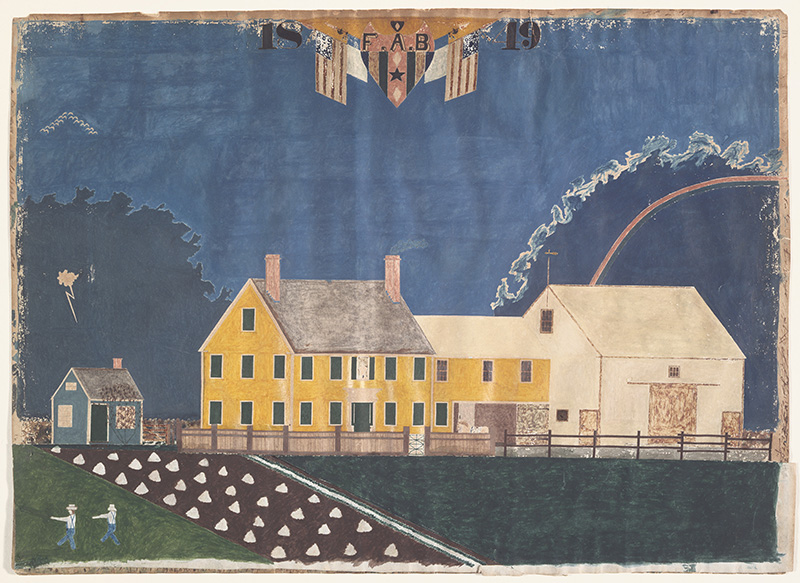 In August 1948 art patron Maxim Karolik took a summer escape to Lenox, Massachusetts, to hear the Boston Symphony Orchestra and to give himself a “rest from collecting.” Karolik was mourning the death of his wife, Martha Codman Karolik, with whom he had built and donated two major collections of American art to the Museum of Fine Arts, Boston. The first featured eighteenth- and early nineteenth-century decorative arts and the second consisted of nineteenth-century American paintings, including works by then-unfamiliar artists such as Martin Johnson Heade and Fitz Henry Lane, as well as folk art paintings. Shortly before Martha’s death, they had embarked on a third collection comprised of nineteenth-century drawings and watercolors.

However, Karolik did not find any respite in Lenox. Instead, he found a renewed passion. The collector excitedly telephoned his MFA collaborator, Henry P. Rossiter, and gushed about the remarkable drawings that he discovered at the Berkshire Hills Antique Show, telling the curator that he should be prepared to be “bowled over.” Rossiter later wrote that he “hoped there might be a few examples by some of the ranking artists, by Homer, perhaps, or Sully or Bingham, among others.” But “Vain Hope. Jubilantly Mr. Karolik brought his catch to the Museum, over eighty, all framed in Victorian walnut or crumbling gilt and in assorted sizes. There were watercolors, pastels, pencil and wash and ink drawings, by primitives, amateurs, and schoolchildren…. What a nightmare or so it seemed.”

Karolik shook up established standards of fine art by championing the then radical notion of incorporating folk art within an encyclopedic museum. However, Karolik’s expansive vision of American art proved to be ahead of his time—while MFA curators ultimately accepted the value of folk art, they remained reluctant to display it alongside the so-called “fine art” in the collection for decades to come.

On February 6 the MFA will open Collecting Stories: The Invention of Folk Art, a reconsideration of works on paper and sculpture from the Karolik Collection of American Folk Art. This is the third in a series of three exhibitions funded by the Henry Luce Foundation that uses understudied works from the MFA’s collection to address critical themes in American art and the formation of modern American identities.

The exhibition seeks to start breaking down the boundaries of the art historical classification of folk art through the exploration of its origins, its history at the MFA, and the works themselves. The Invention of Folk Art marks the beginning of the museum’s multi-year initiative to build upon Karolik’s profound efforts to eliminate classifications of folk and fine art. This initiative will investigate how to better understand, display, and interpret artwork previously labeled “folk art” in a manner that acknowledges the multiple interpretations of the objects over the years, and best suits the needs, desires, and values of today’s society.