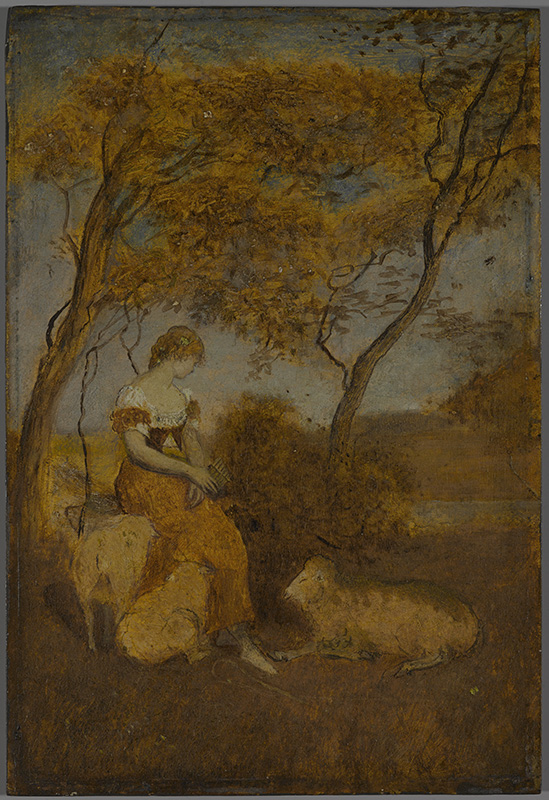 The energetically abstracted land- and seascapes of Albert Pinkham Ryder led Jackson Pollock to declare him “the only American master who interests me.” Ryder’s work also had a special attraction for Hans Hofmann, Arthur Dove, and other American avant-gardists, including the organizers of the 1913 Armory Show, who incorporated ten of Ryder’s canvases into their coming-out party for modern art. Yet today Ryder’s influence on the modern artists who came after him is little appreciated, an art-historical oversight that an exhibition at the New Bedford Whaling Museum, the first for the painter in more than thirty years, attempts to correct.

Born in 1847, Ryder spent the majority of his life in New York City, where he studied painting, first under portraitist and engraver William E. Marshall and subsequently at the National Academy of Design. If early Barbizon-inspired pastorals, suffused with soft yellow light and populated by panpipe-playing maidens, draw their inspiration from gentle dreams of the Golden Age—or from the painter’s memories of his bucolic Massachusetts boyhood—the stormy canvases of later years summon all the drama of the Old Testament. In works like Moonlit Cove and The Canal, descriptive detail has been almost snuffed out, leaving behind a tattered pattern of blacks, yellows, browns, and whites that evoke, rather than transcribe, earth, water, and sky. In Jonah, perhaps Ryder’s greatest work, thousands of tiny, darting strokes come together to embody the hostile ocean rising to meet the eponymous sinner. The white-capped waves feel dangerous, obeying no earthly fluid dynamics as they crash almost at right angles, their rafts of yellow foam like zigzagging bolts of lightning. It’s a masterpiece of controlled chaos, and, taking into account the radically flattened perspective that this twenty-seven by- thirty-four-inch drama occupies, it lands only a hairsbreadth away from action painting.

Betrayed by friends and discouraged by declining romantic prospects, at the end of his life Ryder was living like a recluse, surrounded by detritus he couldn’t bear to part with, and paintings that, with failing eyesight, by then took him years to complete. Yet the rising generation of modern artists saw in his example that of the true artist, waving his brush to conjure—as Marsden Hartley put it—“the immanent in things.”