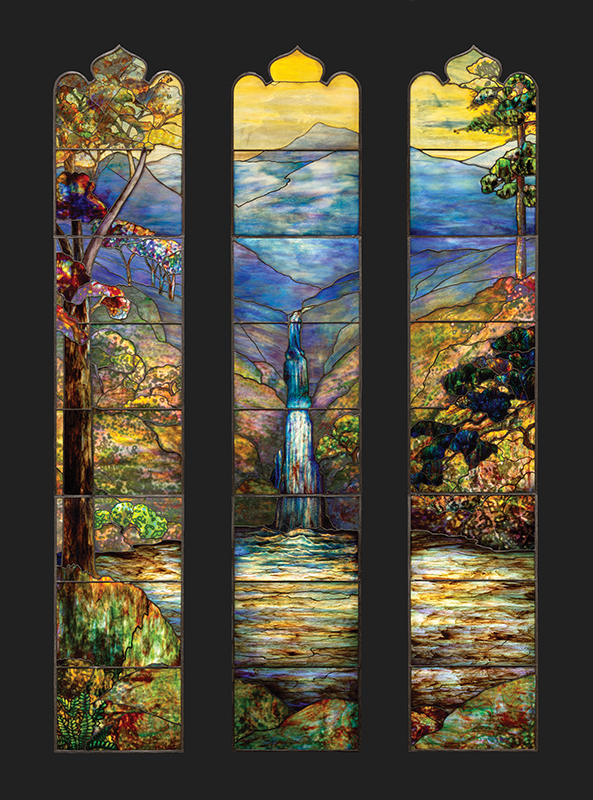 For forty-four years, Marc Chagall’s stained-glass creation America Windows has been a signature holding of the Art Institute of Chicago. This spring, the museum unveiled its latest significant acquisition in the medium: the Hartwell Memorial Window, designed in 1917 by Tiffany Studios for the Central Baptist Church in Providence, Rhode Island.

Commissioned by the widow of Frederick W. Hartwell—a leading Providence businessman whose family had deep roots in New Hampshire—the window depicts a waterfall with a view of Mount Chocorua in the White Mountains in the distance. The work remained in situ until 2018, when the congregation (now the Community Church of Providence) opted— as Pastor Evan Howard stated—“to find a new home for the window where it could be experienced by a broad public audience that includes scholars, artists, and visitors from around the world.”

Comprised of forty-eight panels and measuring twenty-three by eighteen feet, the window is attributed to designer Agnes F. Northrop, who specialized in landscapes and floral motifs. “A major creative contributor over the course of her five-decade long career,” says Elizabeth McGoey, Ann S. and Samuel M. Mencoff Associate Curator, Arts of the Americas,“ she worked closely with Tiffany, and also secured copyrights for some of her designs. She supervised the Women’s Department at the firm for several years, but then shifted to working on the Studios’ one-of-a-kind commissions, like the Hartwell Memorial Window.”

One of the largest and most ambitious landscape window projects ever undertaken by Tiffany Studios, according to McGoey, the Hartwell Memorial—which had weathered the years remarkably well—was given thorough attention by conservators in Chicago. The glass surfaces were cleaned, and the lead perimeters reinforced and stabilized. “Close study of the panels also revealed new insights into Tiffany Studios’ stainedglass production, including some use of applied paint on certain surfaces of the glass that served to clarify and reinforce details of the landscape,” McGoey says. Although removed from its original context, the window retains an air of ecclesiastical gravitas, situated at the top of the grand staircase in the Art Institute’s 1893 beaux-arts home on Michigan Avenue.