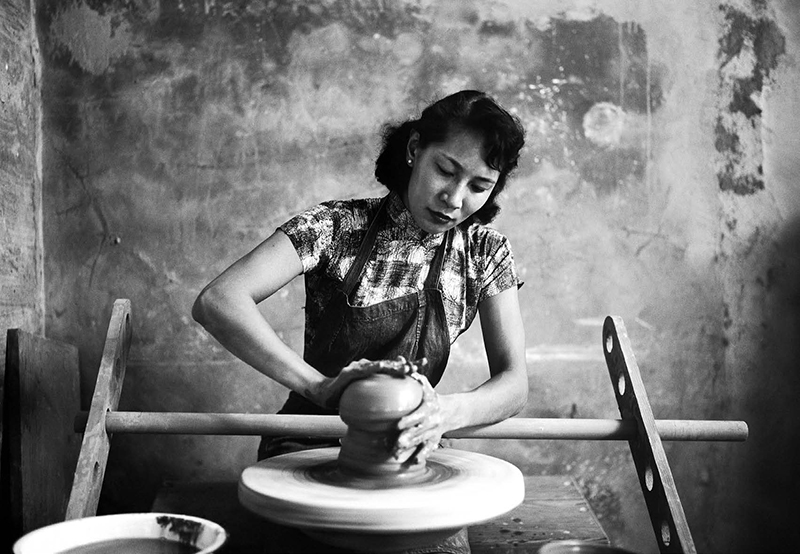 In the 1950s the ceramist Katherine Choy was on a trajectory towards eminence. The daughter of an affluent Shanghai merchant, she came to the United States for college in 1946 at age nineteen and found her muse in clay. Choy’s training in pottery would be peerless, as she studied under three of the central figures in twentieth-century studio ceramics. At Mills College in Oakland, California, her instructors included F. Carlton Ball, who was instrumental in establishing pottery-making as a recognized academic arts discipline, teaching both technique and the history of the craft, and guest lecturer Bernard Leach, a highly influential Japan-trained British ceramist and teacher who imparted the folk traditions and spirituality of Asian potters to his students. Then, in 1951, Choy attended the Cranbrook Academy of Art in Michigan on a scholarship, where her teacher was the legendary Maija Grotell, known as the “mother of American studio ceramics.”

Even as a student, Choy earned wide acclaim for her elegant pots in traditional Asian forms with painterly modern decorations. Her glowing reputation and educational pedigree won her a prized teaching post in 1952, when she was chosen to lead the famed ceramics department of Newcomb College at Tulane University in New Orleans. “I don’t put fiery dragons on my ceramics just because Chinese tradition would dictate that sort of decoration,” Choy told a reporter from the New Orleans Item newspaper the following year, when she was given a solo show at the Delgado Museum of Art—now the New Orleans Museum of Art. (She also had to explain why she didn’t favor silk sheath dresses: “Denim is more comfortable.”)

For a time during Choy’s tenure at Newcomb, she enjoyed a side gig as a designer for the New York fashion textile maker Isabel Scott Fabrics, and she would drive to the city to escape the muggy summer weather in New Orleans. Perhaps it was a taste of East Coast cosmopolitanism, perhaps she felt that the tradition of tasteful ceramics at Newcomb stifled her creativity; whatever the reasons that prompted her, Choy left New Orleans after a few years for New York.

Choy’s pottery had indeed changed, becoming energetically expressive. Function now mattered little as she built dramatically off-kilter forms, such as vases with multiple spouts or a donut-like hole in the body, and finished them with dark, speckled glazes. “Craft influences are evident in her early work, but Choy’s ceramics expanded into jagged, asymmetrical sculptures that assuredly broke with the traditions she knew so well,” says Mel Buchanan, decorative arts curator at the New Orleans Museum of Art and the organizer of the current show Katherine Choy: Radical Potter in 1950s New Orleans. “The magnificent pots gathered in our exhibition show both gusto and sensitivity, and they show that Katherine Choy was a leader in the mid-century reimagining of clay as art.”

In an interview published in the March 1957 issue of Craft Horizons magazine, Choy said: “I believe that the artist-potter should question life. This requires a continuous breaking down and summarizing to express, to relate, to find one place and move with one’s own time, yet keep a universal entity.” That year in New York, she founded a place where she could give full rein to her creativity and share her knowledge of pottery-making: the Clay Art Center in the suburban village of Port Chester, a communal ceramics studio that is still thriving today. What Choy might have accomplished there will never be known. She died unexpectedly in February 1958, at age thirty, of causes that were not publicly disclosed.