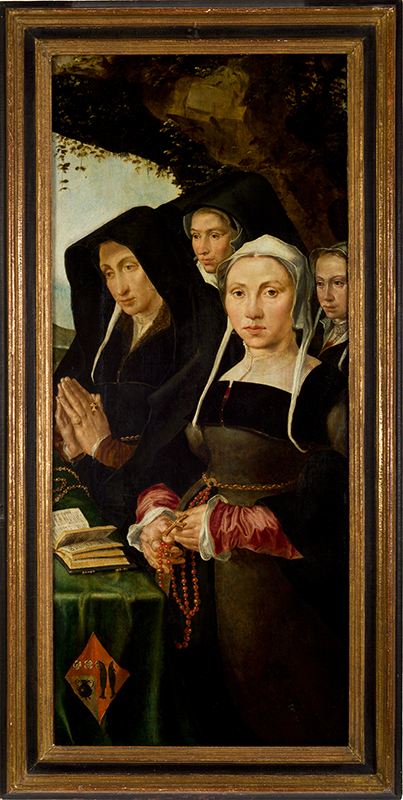 Viennese textile manufacturer Richard Neumann accumulated an impressive collection of Old Masters during the first decades of the twentieth century. But following the annexation of Austria in 1938, the Nazi regime and other wartime exigencies eventually forced him to leave behind all that he’d acquired. Postwar, Neumann dedicated himself to recovering what he could of his collection, an effort carried on by his descendants. To date, sixteen objects have returned to the family, fourteen of which are now on long-term loan to the Worcester Art Museum.

Although Neumann’s appetite was primarily for late baroque and rococo paintings from Italy, special affection was reserved for a pair of donor panels painted by Dutch artist Maerten van Heemskerck. Considering Neumann’s change in fortunes between 1938 and the end of the war, it’s tempting to find a meta- phor in this sixteenth-century work. In the panel on the left, a man gestures with his right hand, his face frank and almost eager; on the right panel, a woman with a serious expression gazes coolly as she fingers the rosary.

All his life, Neumann maintained hopes for a contented, art-filled future, concluding a lecture delivered in Cuba with the invocation: “May a happier time renew the universal enjoyment of artistic and spiritual values and a second renaissance introduce a new golden age of mankind.” Thanks to the efforts of his grandchildren, as well as authorities in Europe, a small slice of Neumann’s personal paradise is once again available to be enjoyed.

What the Nazis Stole from Richard Neumann (and the Search to Get It Back) • Worcester Art Museum, Massachusetts • to January 16, 2022 • worcesterart.org