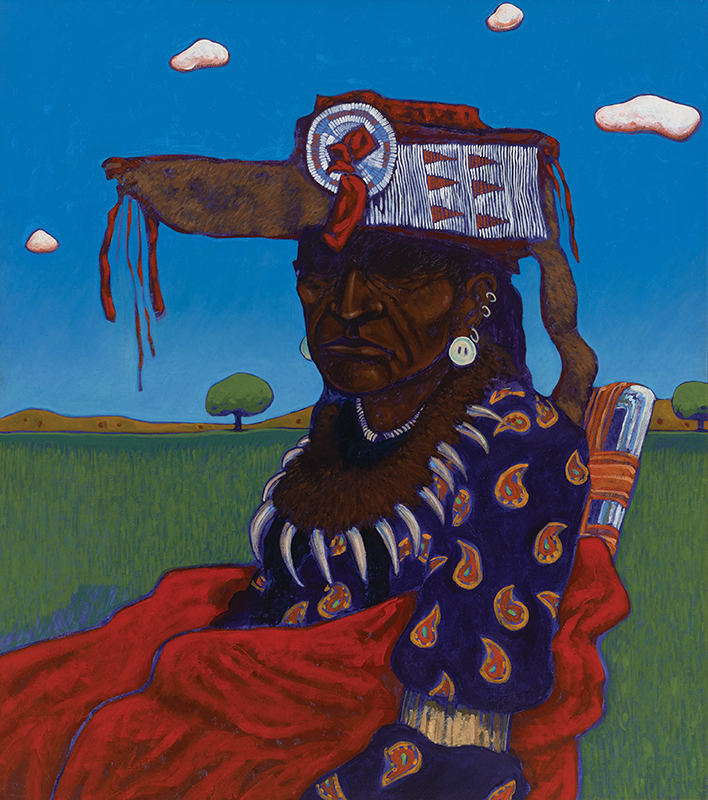 New England is undeniably a hub for traditional American decorative arts, and the Peabody Essex Museum has been home to one of the richest collections since the founding of the institution it evolved from, the East India Marine Society, in 1799. But Native American art and craft of the region is often overlooked. The Peabody Essex, however, also holds an impressive collection of work by Native artists from across many generations, including that of such contemporary American indigenous artists as Truman Lowe (Ho-Chunk), Cara Romero (Chemehuevi), and Kay WalkingStick (Cherokee Nation). This month, the museum will open a new gallery that combines works from its Native American and traditional American art collections.

The gallery’s inaugural exhibition, On This Ground: Being and Belonging in America, questions the definition of “American art.” It places works of art by indigenous peoples side-by-side with the colonial art that museums have long touted as the material representation of American heritage. The exhibition’s co-curator Sarah Chasse notes that “the project recognizes power dynamics . . . and foregrounds a multiplicity of American stories and voices in order to create a broader and more nuanced understanding of our histories.” It is a first for the Peabody Essex and follows the growing trend of decolonization of American art galleries. In 2017, for example, the Metropolitan Museum of Art in New York finally began to integrate Native American art into its American Wing, rather than sequestering it in galleries of indigenous art from Africa, Oceania, and the Americas.

The Peabody Essex continues to reckon with its colonial legacy. It was originally a repository for “exotic” treasures collected by East India Marine Society members on their grand voyages. The museum sits on the ancestral land of the Pawtucket, Wabanaki, Massachusett, and other peoples, and many members of these indigenous communities still live and work in the area. The new Peabody Essex gallery opens with a video installation featuring a Massachusett Tribe at Ponkapoag community elder, Elizabeth Solomon, telling the story of the land now known as Salem, Massachusetts.

The scale of the new integrated American gallery at the Peabody Essex is “unprecedented,” says the museum’s curator of Native American art and co-curator of the exhibition, Karen Kramer. She is also director of the museum’s Native American Fellowship Program, a mentoring initiative that aims to bring more students and young professionals of indigenous descent into the museum field. Fellows from the program contributed curatorial feedback and interpretive insight to this project. The Peabody Essex team seeks to bring indigenous artists to the forefront— to challenge perceptions of who is American and what it means to belong to the cultural lexicon of American art.

On This Ground: Being and Belonging in America • Peabody Essex Museum, Salem, Massachusetts • March 12 to January 3, 2027 • pem.org