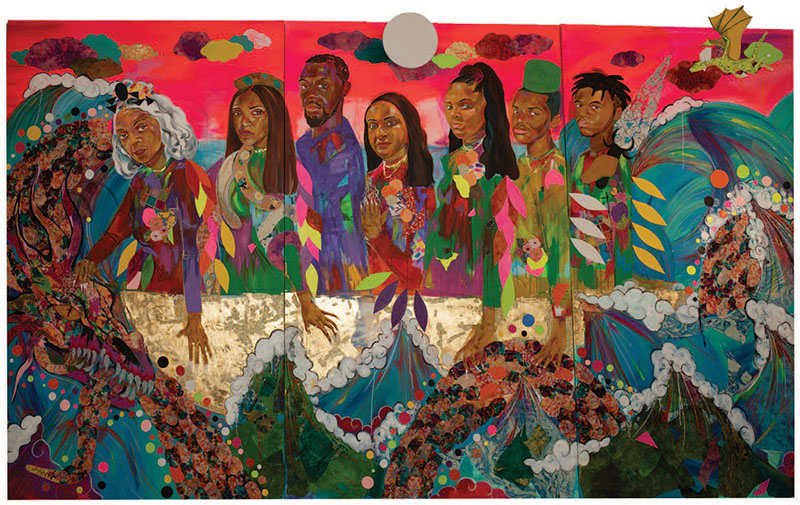 Beginning around 1910, Black Americans began moving in ever-increasing numbers from the agrarian South to the industrial North, hoping to find a better life, away from the violence and oppression of the Jim Crow era. Some six million people took part in that exodus, which continued in waves until the 1970s.

The Great Migration, as it became known, has inspired much artistry and several masterpieces— most notably Jacob Lawrence’s epic Migration Series of paintings of 1940 to ’41—and, as a current exhibition at the Mississippi Museum of Art demonstrates, continues to do so. A Movement in Every Direction: Legacies of the Great Migration brings together new work by a dozen Black contemporary artists—including such luminaries as Theaster Gates Jr., Carrie Mae Weems, and Zoë Charlton—who were asked to explore the impact of the migration on American culture as well as their own personal connections to the South.

The artworks in the show—which is co-organized by the Baltimore Museum of Art—range from grim to buoyant. In Leave! Leave! Now! Weems examines the story of her grandfather, a union organizer in Arkansas who escaped a lynching attempt, but later disappeared in Chicago. At the other end of the spectrum, with her triptych This Water Runs Deep, Jamea Richmond-Edwards offers a vibrant testimonial on her family’s journey from New Orleans to Detroit.

A Movement in Every Direction: Legacies of the Great Migration • Mississippi Museum of Art, Jackson • to September 11 • msmuseumart.org