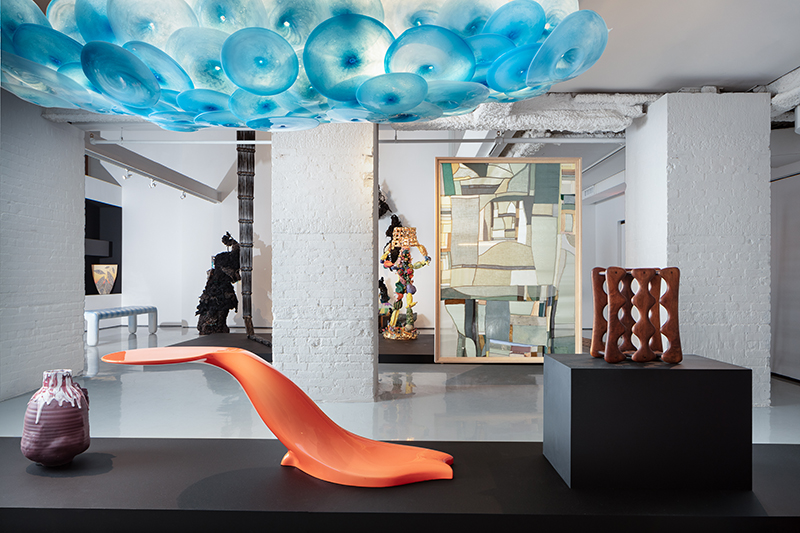 A revelatory exhibition opened on October 3, 1969, in Washington, DC, at the National Collection of Fine Arts—today known as the Smithsonian American Art Museum. Objects: USA—a show that would later travel to thirty-three cultural venues across the United States and in Europe—brought together some five hundred works by 308 artists, all of them active in the American studio craft movement. They used time-honored artisanal techniques while working in traditional craft mediums, such as wood, metal, textiles, ceramics, and glass. But conventionality ended there. Far from old-fashioned, the pieces in Objects: USA had a new energy and dynamism. Some were functional, others sculptural; some were sleek, others tactile; they might manifest wit, political views, or ethnic pride; some were refined, while others seemed as improvisational as a Charlie Parker solo; and they were made by American artists of every color and kind. Many, if not most, visitors to the show had never seen the like of such things.

Objects: USA is still fondly remembered as the highwater mark for American studio craft, and the show remains influential among artists, art historians, curators, and collectors. As proof, a new exhibition at the New York gallery R and Company serves as both an homage to and a reboot of the original presentation. Objects: USA 2020 gathers together the work of fifty artists who were represented in the 1969 show and fifty contemporary artists who bring a craft sensibility and craft techniques to bear on their creations, even if they employ up-to-date materials and technology. “We wanted to celebrate the original Objects: USA exhibition and inform the public of its vast impact in the world of design, fine art, and, of course, craft,” says Evan Snyderman, co-founder of R and Company. “The exhibition defines what I see as a movement. One that started fifty or so years ago and is now coming full-circle as the contemporary art and design worlds welcome craft back into the fold.”

Objects: USA 2020 was curated by art historian (and ANTIQUES editor at large) Glenn Adamson, joined in the effort by Snyderman, R and Company curator and museum relations director James Zemaitis, and art fair impresario Abby Bangser. The exhibition was meant to open last September, to mark the fiftieth anniversary of the publication of the original show’s catalogue—but, of course, Covid-19 scotched those plans.

But the wait has been worth it. This is a show that, like the original, rewards two or even three or more visits. There is a welcome sense of comfort derived from standing in the presence of historical works by the master artist-artisans who were included in the 1969 exhibition, such as woodworkers George Nakashima and J. B. Blunk, fabric artists Anni Albers, Sheila Hicks, and Lenore Tawney, ceramist and legendary Cranbrook teacher Maija Grotell, and the bravura Greenwich Village jewelry designer Art Smith. Meanwhile, the intricate work produced by contemporary artists merits the kind of close inspection that may require multiple visits to the show.

The watchword for today’s artist-makers is “crossdisciplinarity,” Adamson explains. “The whole logic of studio craft was medium-based—an emphasis on clay, fiber, metal, glass, or wood—and took for granted a specific mode of working: artisanally, in a small shop setting, as the name implies. Once makers began to explore other approaches, both across mediums and genres, that focus and the ideology that went with it seemed less significant.” In other words, the notion that an artist should be a ceramist, or a weaver, or a woodworker full stop has pretty much disappeared. Objects: USA 2020 features creations like those of Tanya Aguiñiga, whose Vestigial 2 is composed of cotton rope and sisal, along with bits of clay, Mylar, and gold leaf; and the Haas brothers, Simon and Nikolai, whose Gray Liotta club chair is made from cast bronze covered in Icelandic sheep fur; or Jiha Moon, whose vessels incorporate earthenware, porcelain slip, and a wreath of plaited artificial human hair.

And there is another key characteristic of this contemporary art community. “To me, the most important thing craft brings to the table is diversity,” Adamson says. “The historic dominance of fine art, industrial and graphic design, and architecture by white men simply is not paralleled in craft history. The craft revival happening now is far more diverse than the arts and crafts movement, or even the studio craft movement, both of which were themselves much more inclusive than the fine art of their own day.”

R and Company’s principals are planning a touring program for the exhibition, which would include an outreach effort giving other up-and-coming artists a platform for their work. Success is to be hoped for a scheme that would give more people the opportunity to see the work of artists who together, as Adamson writes in the show catalogue, “mount a powerful case for the USA at its imaginative best: a polyglot, permeable, and productive place.”