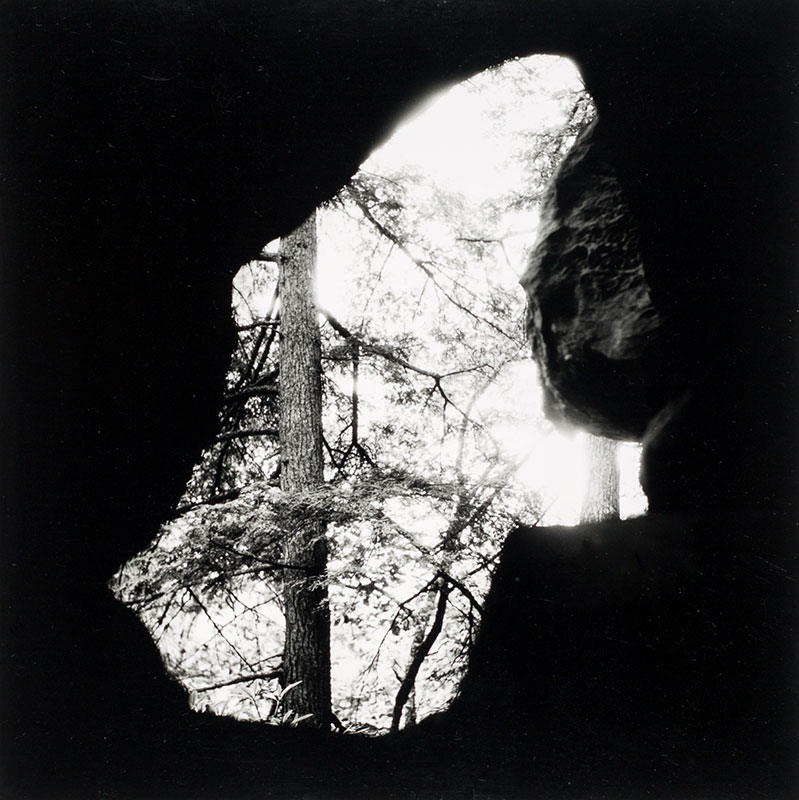 In 1967 the University of Kentucky Press invited poet Wendell Berry to write a book that would bring public attention to the plight of the Red River Gorge, a geological feature in eastcentral Kentucky that was under threat from a proposed downriver dam. Berry accepted the project and convinced his friend Ralph Eugene Meatyard—better known then and now for unsettling black-and-white images of family and friends in grotesque masks—to produce the accompanying photographs. Over a three-year period, as the two collaborators hiked the gorge together and alone, what had begun as an illustrated text evolved into two separate but connected meditations on the ecological and spiritual value of this rustic landscape. Meatyard’s contributions to The Unforeseen Wilderness, first published in 1971, can be studied at the Speed Museum of Art in Louisville, which recently acquired a portfolio of fifty-six of the photographer’s hand-printed images.

Meatyard eschewed sweeping views of the gorge to focus on minutiae: the naked branches of a dead tree silhouetted against dense foliage, piles of boulders or tangled thickets. In many of his high-contrast prints— which are small, just over six-by-six inches—these incidents of the landscape barely emerge from the pervading darkness of the forest floor. “Darkness becomes a metaphor for one’s approach to the unfamiliar, the unknown, the unforeseen,” writes Kim Spence, the exhibition’s curator, in an email. “Just as one enters a darkened room without knowledge or understanding of what might be in the room, it is as the eyes adjust that light begins to emerge from the darkness and one begins to see.”

Inspired by the writings of Trappist monk Thomas Merton, whose bestselling autobiography, The Seven Storey Mountain, chronicled the monk’s journey from benightedness to belief, both Meatyard and Berry saw in their exploration of the Red River Gorge a metaphor for the quest for spiritual enlightenment. And yet the revelation that Meatyard’s photographs at the Speed offers is, to borrow Willa Cather’s description of music, at best equivocal. The web of an orb weaver glistens in the sunlight, both seductive and sinister, and bracingly devoid of moral significance. By way of dark, disorienting fragments (whose weirdness is intensified by long exposures or by camera movement, to introduce motion blur) Meatyard presents a landscape that is lovely but bewildering, almost alien, and which resists description. As Berry wrote in the Hudson Review in 1970/1971: “For the wilderness, which is to say the universe, we have no words. We deal with its stones, its trees, its water. . . . Our words are for the way we have been.”