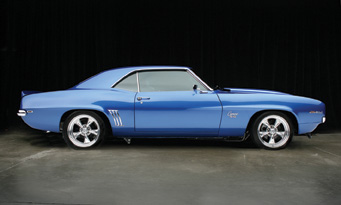 When it opened last fall on Newport’s swank Bellevue Avenue, the Audrain Automobile Museum was immediately up to speed (metaphors drawn from car culture are inexcusable but somehow inevitable with the Audrain), exhibiting a small but head-turning group of rare pre-World War II luxury cars, such as a fire-engine red 1930 Pierce-Arrow Convertible with a custom fitted compartment for your golf bag, and a 1931 Lincoln Model K convertible in a beautiful, and shall we say enviable, pea green.

Everything has been thought of at the Audrain, from the retrofitting of the handsome 1902-1903 Audrain building to set off the car collection with dark wood floors, white walls, and exposed steel beams to the precisely tuned labels detailing, for instance, the Lincoln’s Single Stromberg Downdraft Carburetor in case you want to know…and some of you will.

The driving force behind the Audrain is financier and real estate magnate Nicholas Schorsch, who owns most of its collection of more than one hundred vehicles. Its executive director is David de Muzio, formerly of the Philadelphia Museum of Art, where he oversaw collections of a different sort with the same meticulous attention to presentation, conservation, and visual drama.

Although they started off with luxury cars last fall and continued with a group of rare lean and mean supercars—like the 1955 Mercedes Benz 300 SL (the unofficial first “supercar”) and the 1998 Ferrari 355 F1 Berlinetta—this past spring, both men grew up in the 1960s and 1970s besotted with cars of a more vernacular appeal—muscle cars, hot rods, custom cars, and vintage Camaros, especially the elusive 1969 Copo Camaro. “We both have a thing for them,” de Muzio confesses of the Chevys.

This summer the Audrain is showing hot rods and custom cars that, as with their other exhibits, de Muzio says, “will tell their own stories and the stories of the builders who made them and modified them.” Eventually the museum will also mount an exhibition of race cars, probably more than one, and possibly at some point we can expect pickup trucks and motorcycles to roll into view; the Audrain has a few of each with their own tales to tell.

Most of the stories at the Audrain, like most of the collection, are American ones. If automotive design has currently lost the romantic allure of the cars that hypnotized so many of us as young and heedless teenagers,the Audrain is doing all it can to bring that magic back.

The Audrain Museum is a sponsor of the Newport Antiques Show, which takes place this year from July 24 to 26, at Saint George’s School in nearby Middletown, Rhode Island.