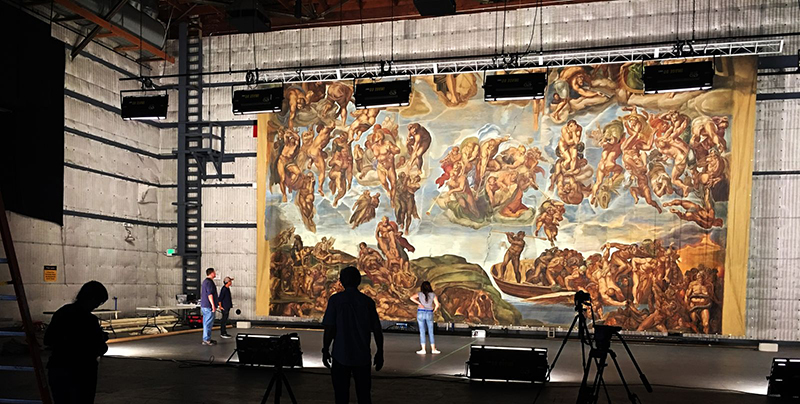 The 1968 MGM film The Shoes of the Fisherman is a Cold War drama about a pope, played by Anthony Quinn, who helps avert a nuclear conflict between the Soviet Union and China. During the making of the movie on location, the Vatican was, understandably, unwilling to give a Hollywood production crew the run of sites like the Sistine Chapel. How did filmmakers re-create the majesty of Michelangelo’s masterpiece in the days before digital computer effects? With gigantic hand-painted scenic backdrops.

Six of these mammoth artifacts of Tinseltown wizardry are on view at the McNay Art Museum in San Antonio, in an exhibition co-organized with the performing arts department of the University of Texas at Austin, which owns the Shoes backdrops. Immense painted backings—as they are known in the trade— were once a staple of film production, filling in for sites as various as mountain ranges and skyscraper-filled cities. Some were used over and over again, while others were deployed for just a single movie, then packed away in storage and forgotten.

The Shoes scenery pieces fell into the latter category. They are among the more than two hundred settings that have been saved by the Backdrop Recovery Project of the Art Directors Guild in Los Angeles. The backings the guild has preserved include the eerie alien landscape of Forbidden Planet, and the Mount Rushmore vista from North by Northwest. Many of them have been given to schools such as UT Austin, where they are used as teaching tools, so it’s not unlikely that you could see more such Hollywood attractions coming soon, to a museum near you.