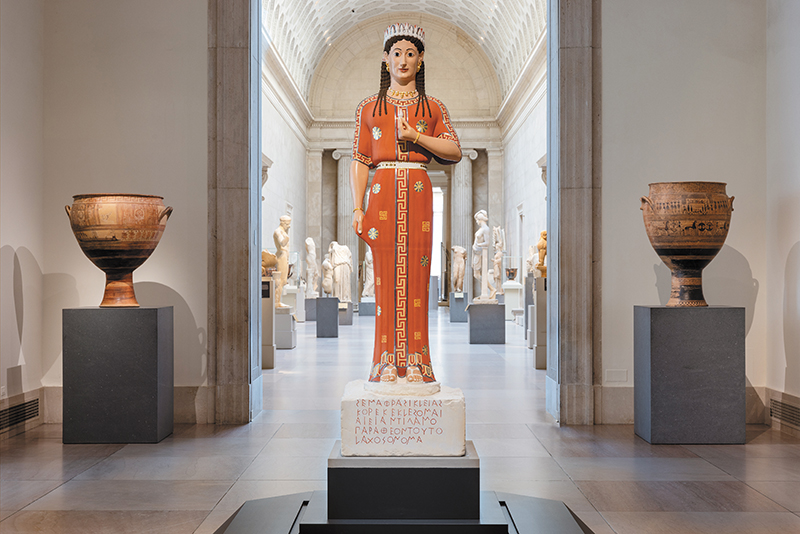 Antiquities collections in museums have so accustomed us to the sight of pristine white marble sculptures from classical-age Greece and Rome, that we believe the statues were always and intentionally thus. Yet archaeologists have long known that these works were originally painted in bright colors—that the marble was essentially a blank canvas. Recent technological advances have allowed researchers to learn just how vibrantly colored and patterned these sculptures were when they were first on view. For a glimpse of how the ancient world actually looked, visit the current exhibition Chroma: Ancient Sculpture in Color at the Metropolitan Museum of Art.

The show features plaster or 3D-printed reproductions of classical sculptures from museum collections around the world finished with vivid polychromatic hues and intricate patterns—such as the harlequinlike motifs on the sleeves and leggings of a sculpture of an archer that once graced a Greek temple. The reproductions are the work of Vinzenz Brinkmann and Ulrike Koch-Brinkmann, a husband-and-wife team of archaeologists who work at the Liebieghaus Sculpture Collection in Frankfurt am Main, Germany. The two are at the forefront of research into ancient polychromy, using tools such as ultraviolet and X-ray spectrographs to learn the colors and designs that used to clothe ageold statuary. (Their Gods in Color exhibition has been touring museums worldwide since 2003.)

One of the prized holdings of the Met’s antiquities collection is a thirteen-foot-tall marble column, dating from about 530 BC, that once marked the graves of a young man and a little girl. Atop the column sits a winged sphinx. The German archaeologists made an extra-large copy of the mythical beast, and she now holds court as the centerpiece of the current show— with her tawny leonine torso and haunches, brilliantly colored crest and wings, piercing eyes, and the trace of a cryptic smile on her lips.