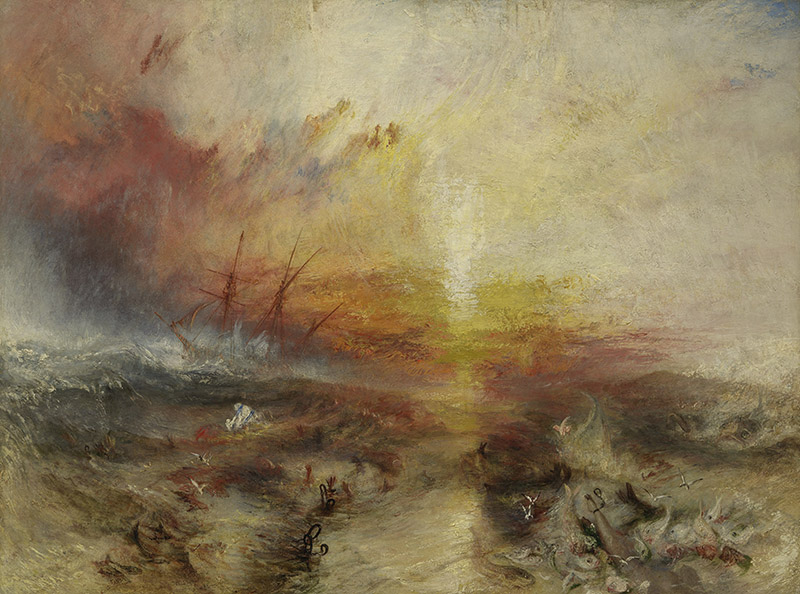 Joseph Mallord William Turner lived through decades of heady change. Born on the eve of the American Revolution, he died a couple months after the close of the Great Exhibition of 1851, which summed up a century of mechanical progress. During the intervening years, wars raged from France to Greece, steam power was supplanting horsepower in Britain, and Whig progressives oversaw first the abolition of the international slave trade then doubled the number of eligible voters in the painter’s homeland. Turner’s Modern World, a traveling exhibition making its final stop at the Museum of Fine Arts, Boston, demonstrates— through more than one hundred paintings, watercolors, drawings, and sketchbooks—the English painter’s engagement with his times.

Early works from Turner’s journeys through England and continental Europe depict a world of militarized industry: mine shafts, lime kilns, and cannon foundries choked with smoke and lit by infernal fires. This wasn’t conventional subject matter for a young artist. Admitted to the notoriously retardataire Royal Academy at the age of fourteen, Turner would have been discouraged from depicting contemporary subjects. But there was plenty of precedent for doing so in Britain—Joseph Wright of Derby had made a name for himself in the 1700s with his dramatic, Caravaggioesque paintings of scientific demonstrations, and William Hodges with his depictions of distant lands as seen on Captain Cook’s second voyage—as well as inspiration from abroad, in the work of Géricault, Delacroix, and other socially engaged artists. And, as the industrial revolution gained momentum, those with the capital to patronize artists were themselves often manufacturers and entrepreneurs, who desired paintings that valorized their trades.

Contemporaneous reaction to Turner’s most avantgarde work ranged from befuddled to vicious. To a reviewer for the Literary Gazette, Turner’s Keelmen Heaving in Coals by Moonlight, believed to have been painted for cotton magnate Henry McConnell, was “glorious moon-light wasted on dingy coal-whippers.” The Field of Waterloo, a strikingly unconventional history painting, fared no better among critics. In this nearly five-by-eight-foot canvas no battle is depicted, no exchange of swords. Simply the dead, laid out on the battlefield and grieved over by their loved ones. Such a jaundiced rendition of a subject of national pride was stamped as a “drunken hubbub on an illumination night” by the Annals of the Fine Arts.

What messages Turner expected to communicate with such works is unclear. The centerpiece of Turner’s Modern World as it appears at the MFA, Boston is the museum’s Slave Ship (Slavers Throwing Overboard the Dead and Dying, Typhoon Coming On), which, owing to its fragility, couldn’t travel to the exhibition’s previous stops, London’s Tate Britain and the Kimbell Art Museum in Fort Worth, Texas. With its stark portrayal of dying Africans vanishing under the Atlantic waves, the canvas might seem an abolitionist artwork par excellence. But the show’s curators caution against such simplified readings. Turner “worked through visual allusions and associations, sometimes suggesting various things at once.” This method was a calculated one, meant to help the painter avoid upsetting his wealthy clientele. But would it be wrong to also see it reflecting the very modern impulse to, in the face of constant flux, resist committing oneself?