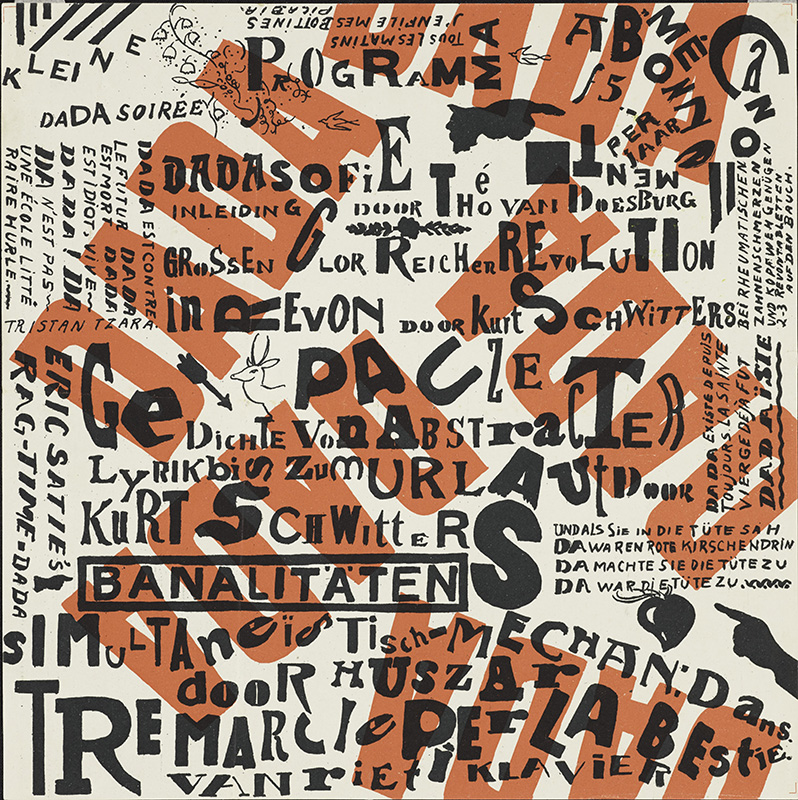 When considering Dada and surrealism, intertwined art movements that shared practitioners in the period during and immediately after World War I, what comes to mind might be framable artworks: paintings by Salvador Dalí or Max Ernst, flyers for and photographs of inane performative spectacles. But as Stephen Woodall, collections specialist at the Legion of Honor’s Achenbach Foundation for Graphic Arts, points out, “both Dadaism and surrealism were movements started not by visual artists but by poets.” The aims of Dada were formalized by Hugo Ball in his manifesto of 1916; “surrealism” was coined by Guillaume Apollinaire a year later. The book, then, and not the canvas, was terra firma for Dadaists and surrealists, and became a fertile meeting place for radical poets and their compatriots in the visual arts—Dalí, Ernst, Pablo Picasso, Man Ray, and Joan Miró among them. In the exhibition Strange Days: Dada, Surrealism, and the Book, at the Legion of Honor, examples of this productive collaboration are on view, starting Saturday.

The more than thirty artifacts—grouped into seventeen exhibits—include a 1934 edition of Comte de Lautréamont’s Les chants de maldoror [The Songs of the Maldoror] that boasts macabre and hallucinatory etchings by Dalí; issues of the early (and short-lived) surrealist journal Minotaure, edited by André Breton—author of the Surrealist Manifesto—and Pierre Mabille; and Louise Bourgeois’ 1990 book The Puritan, along with works on paper like a poster by Kurt Schwitters and Theo van Doesburg advertising Netherlandish Dada events in 1922.

“[There’s] important work that’s hidden away in books that people don’t get to see,” Woodall explains, noting that the Legion of Honor is one of the few major museums with a gallery devoted to the display of artists’ books. Part of the problem lies in the fact that displaying book-bound art is inherently difficult. Usually, only one spread can be shown at a time, though through the clever deployment of acrylic props and tiny, rare-earth magnets, two are shown at once for some of the books in Strange Days.

Sometimes, taking a second look at an artist’s book can lead to a surprise. When a copy of Breton’s 1923 book of poems Clair de terre [Earthlight]—with frontispiece portrait of the poet by Picasso—was opened, it disgorged a handwritten version of his poem “Silhouette de Paille” [“Silhouette of Straw”] dedicated to Ernst. Hardly known in English, this lucky find is also on display, a testament to discoveries waiting to be made between the pages.

Strange Days: Dada, Surrealism, and the Book is on view at the Legion of Honor in San Francisco from July 20 to November 10.