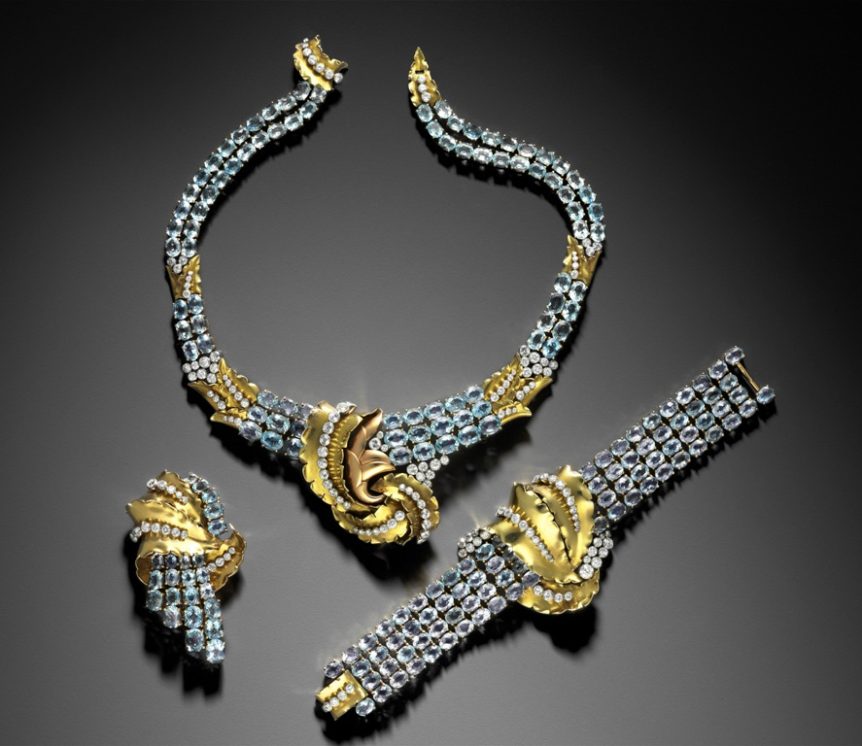 Every age sets its own standard for beauty and style, but rarely has there been an era when glamour and self-display dominated the spirit of the time as they did in the 1930s and 1940s. In spite, or perhaps because, of the Depression and its aftermath, jewelry and fashion designers were busy creat­ing new styles meant for a new elite–the actresses minted by the studio system in Hol­lywood. It was at this moment, in the wake of the introduction of sound in moving pictures in 1926, that the silver screen began to replace high society in the popular imagination, and such actresses as Greta Garbo, Joan Crawford, and Marlene Dietrich eclipsed the panache of the Vanderbilts, Astors, and Goulds. The Mu­seum of Fine Arts, Boston’s glittering exhibition Hollywood Glamour: Fashion and Jewelry from the Silver Screen documents this shift in American style and stylishness.

In the 1930s Hollywood came to epitomize glamour. Crowds packed the picture palaces every week–twenty million in Britain and eighty-five million in the United States.1  Screen goddesses were no longer the vivacious jazz babies of the 1920s silent films. They were cool, seductive Sirens with sex appeal and enormous self-confidence. The makeup, clothes, and mannerisms of actresses such as Greta Garbo, Marlene Dietrich, Mae West, and Joan Crawford were copied by girls wanting to capture the glamour of their idols. As James Laver, the English author, critic, and art historian, noted in Vogue, “Film is the most perfect visual medium for the exploitation of fashion and beauty that ever existed.”2  And actresses were eager to show off the latest fashions designed by a new group of Amer­icans, including Adrian Adolph Greenberg, known simply as Adrian; Travis Banton; and Edith Head. For the most part, the jewelry worn on screen was owned by the actresses, who were also often seen with it in public–part of the glamorous image their studios insisted they project.3  Glamour today is quite another matter: actresses tend to borrow their jewels and proudly appear in public in flip-flops and jeans.

The 1930s opened with Garbo’s first talkie, Anna Christie. The following year she starred with Robert Mont­gomery in Inspiration, a romantic melo­drama about a young Parisian woman who falls in love with a foreign diplomat. MGM’s fashion designer, Adrian, designed the evening gown of black silk velvet adorned with rhine­stones that Garbo wears in the movie (Figs. 2, 2a). In so doing he created a personal style for her of simple, often masculine-inspired clothing, of stark contrast and graphic styling that added to her mystique and complemented the angular lines of her face. This gown with its elaborate ornamentation that functions as a substitute for neckwear is key to the first scene in the film, when she sweeps down the staircase.

Two years later Carole Lombard starred with Clark Gable in No Man of Her Own in which a gambler played by Gable travels to a small town and woos the librarian, Connie Randall, played by Lombard. Her dress with its plunging neckline (Fig. 11) was designed by Travis Banton, Paramount’s chief designer. His clothes were characterized by simple but stylish cuts, often on the bias, rich fabrics, and extravagant decoration such as beads, fur, and feathers. Lombard’s form-fitting dress was made with bugle-bead embroidery, the reflectivity of the glass causing it to shimmer. According to Michelle Finamore, Penny Vinik Curator of Fashion Arts at the Museum of Fine Arts, Boston, “Much of the fashion from Hollywood’s golden age of glamour was like jewelry in dress form, furthering the silver screen’s distinctive style of escapist fantasy. The gold and silver metallic threads of the shimmering lamés, the reflective surfaces of the silky satins, and the sparkling beadwork enrobed the starlets in an otherworldly aura.”

For Anna May Wong, the Chinese-American movie star, Banton designed a silk satin gown with shoulders embroidered in multicolored Chinese-style flowers (Fig. 5). This dress captures the elegance and simplicity of Banton’s designs with its reflective, sensuous fabric that closely follows the lines of the body. Wong wore the dress in promotional stills for Limehouse Blues of 1934.

Marlene Dietrich wore Banton’s fur-trimmed hostess gown (Fig. 3) in Desire (1936), where she plays a jewel thief who hides a strand of pearls in the pocket of the unsuspecting Gary Cooper. Dietrich wore her own jewelry in the film, most notably a diamond and emerald brooch and bracelet de­signed by Trabert and Hoeffer-Mauboussin. Diet­rich’s tough, sexy persona provided a vivid counter­point to the over-scaled, opulent jewelry with its sculptural massing and enormous green stones.4  These were jewels that not only leapt from the flickering halftones of the silver screen but could also be readily spotted at the Brown Derby, or wherever the star chose to appear in public. Diet­rich wore her jewelry with aplomb. “High-style jewelry from the 1930s and ’40s has broad ap­peal–it is bold, glamorous, luxurious, and dra­matic. It is also emblematic of the larger-than-life starlets who wore it on stage, in film, and about town,” says Yvonne Markowitz, recently retired Rita J. Kaplan and Susan B. Kaplan Curator of Jewelry, Museum of Fine Arts, Boston.

Edith Head took over Paramount’s costume de­partment in 1938, bringing her own style to the screen for several decades to follow. She designed the gold lamé gown (Fig. 4) that Betty Grable wore in This Way Please (1937), about a famous singer helping a young usher to realize her dreams.

The actress who epitomized, or pos­sibly caricatured, ex­travagance was Mae West. Her line “Without diamonds, honey, I’d feel undressed” encapsulates the importance of jewelry to her and to the film business of the period. If Dietrich radi­ated a sexy toughness, West was all diamond-encrusted excess, a conscious vulgarity that was meant to make her larger than life, though she was only five feet tall. All swagger and suggestiveness, in one publicity shot she wears multiple bracelets on each arm, a ring with a large cabochon gemstone on one hand, a diamond on the other, earrings, and multiple brooches pinned to her décolleté (Fig. 7). The two-part diamond bracelet joined by two trefoil connectors in Figure 8 may be one of the brace­lets she is wearing in the studio photograph.

Suites of jewelry radiating a pronounced glam­our of excess were popular. West’s aquamarine and diamond set (Fig. 6) consists of a bracelet, brooch, and ring in the art moderne style of the late 1930s and early ’40s, which was characterized by large gemstones set into ample geometrically designed mountings.

Joan Crawford amassed a substantial collection of jewelry from the 1930s through the 1950s when the predominant style was large and bold. The subtle laciness and lush refinement of Belle Époque Cartier designs such as Grace (Mrs. Cornelius III) Vanderbilt wore in the 1910s and 1920s were not for her. According to Ste­fano Papi and Alexandra Rhodes in Famous Jewelry Collectors, Crawford’s “glamor­ous looks were the perfect canvas for designer clothes and designer jewels.”5  One of her favorite parures was the aquamarine and diamond suite consisting of necklace, bracelet, and brooch by the French jeweler Verger Frères,6  and retailed by E. H. Tompkins of New York (Fig. 1). She was often photographed wearing this suite, as in promotional stills for the 1939 movie The Women.

Myrna Loy, best known for her portrayal of Nora Charles in The Thin Man (1934), plays an upper-class heiress married to Nick Charles, a retired detective, played by William Powell. She got the role because of her wit and sense of humor, which director W. S. “Woody” Van Dyke thought would be a perfect fit to play opposite her co-star. In a publicity photograph (Fig. 10), she wears a ring with an important star sapphire, set into a diamond and platinum leaf mounting with baguette diamonds on the shank (Fig. 9).

Although her name is not well known today, June Knight was featured in several Broadway shows, such as Jubilee where she introduced the Cole Por­ter classic “Begin the Beguine.” She also starred with Robert Taylor in I’ve Got a Feeling You’re Fooling. Her love of jewelry, the bigger the better, was no­table. Her necklace set with engraved sapphires and diamonds is convertible to form two bracelets and a brooch or two dress clips (Fig. 13). Like Dietrich’s emeralds, it was made by Trabert and Hoeffer-Mauboussin, a prominent Fifth Avenue jeweler that merged with a French house to create notable jew­elry in the style moderne, the large-scale offspring of the art deco geometry of the 1920s.

Another example of the style is the three-dimen­sional asymmetrically designed bracelet in Figure 12, also by Trabert and Hoeffer-Mauboussin, with its polished gold surface highlighted with cabochon rubies and diamonds. It is characteristic of the vogue for geometrical shapes that make a bold statement due to their size and crisp graphic design.

Ginger Rogers, the rare film paragon of good taste, was nev­ertheless no exception to the imperatives of Hollywood glam­our. On March 9, 1943, she was photographed wearing a suite of gold, diamond, and emerald jewelry in the form of cornuco­pias while having dinner with her husband, Private Jack Briggs (Fig. 14). Emerald pendant drops dangle from the open end of each cornucopia (Fig. 15) in a bold styling that suggests the suite was probably designed by Paul Flato.

Hollywood lured fashion designers and ac­tresses with the glamour of the spotlight. Jewelry that had for centuries been the province of the aristocracy was now created for a new clientele. Hollywood Glamour: Fashion and Jewelry from the Silver Screen allows us to see the figures and fashions of 1930s and 1940s Hollywood in full color rather than their original black and white and offers us an accurate glimpse of an emerg­ing cultural reality. Celebrity was becoming the new royalty, and society, along with the Gilded Age that spawned it, had to take a back seat.

JANET ZAPATA is an independent jewelry historian who has writ­ten often for ANTIQUES.

I would like to thank the following for their assistance: Yvonne J. Markowitz, Michelle Finamore, and Emily Banis Stoehrer at the Museum of Fine Arts, Boston; Jean S. and Frederic A. Sharf; Neil Lane; and Ulysses Dietz, who added “glitter and glam” to this article.

Hollywood Glamour: Fashion and Jewelry from the Silver Screen is on view at the Museum of Fine Arts, Boston to March 8, 2015. mfa.org