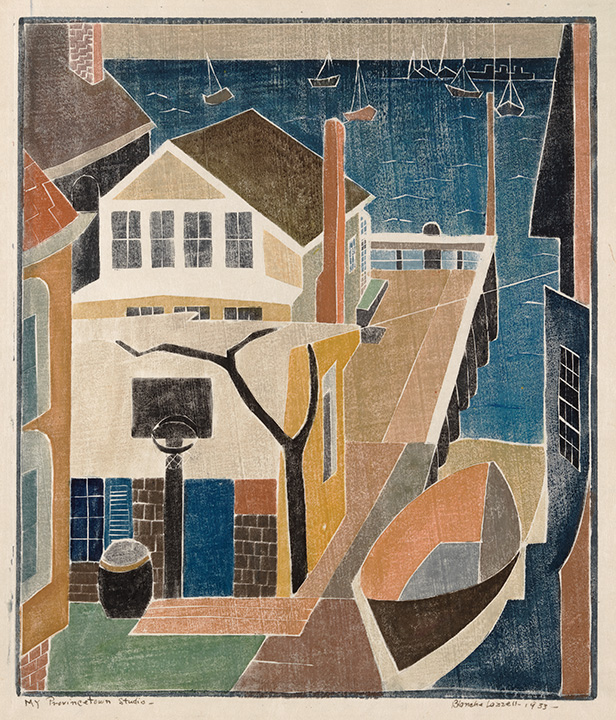 The Lineman by Jessie Jo Eckford, 1932. The works illustrated are in the Nelson-Atkins Museum of Art, Kansas City, Missouri, gift of the Woodcut Society.

As the Great Depression took hold of the country, artists were placed in a unique position to respond, interpret, and illuminate the turbulent changes of the time—both by necessity and by choice. Government­-funded programs such as the Public Works of Art Project, and later, the Works Progress Administration, employed tens of thousands of artists across the United States, yielding thousands of murals, sculptures, paintings, posters, and prints. Yet even with public support, materials and resources were scarce, obliging artists to be prudent and enterprising in order to pursue their art and to make a living. For this very reason, relief printmaking—an inexpensive medium using woodcuts and linoleum—hit its stride in the early 1930s and became an important means by which artists could render the era’s social, economic, and psychological turmoil. A new exhibition, The 1930s in Prints: A Gift to Kansas City from The Woodcut Society, at the Nelson-Atkins Museum of Art presents thirty-­three relief prints from its collection, demonstrating the myriad ways in which artists expressed themselves and channeled the nation’s struggles during that period.

The genesis of this collection can be traced to Kansas City resident Alfred Fowler, a local businessman in the grain trade, who developed an exceptionally strong interest in printmaking and formed the Woodcut Society in 1932. During its tenure, the society championed the art form through biannually commissioning prints and staging traveling exhibitions—with the ultimate goal of building a permanent collection for a museum. And thanks to contributions from an international group of artists, the society churned out a substantial body of work. The prints produced for and commissioned by the organization were varied in subject matter, technique, and geography, as reflected in the pieces chosen for the exhibition, which were culled from a collection of more than two hundred donated by the society to the museum in the mid­- to late 1930s. As Katelyn Crawford, the assistant curator of American art at the Nelson­-Atkins, points out, a nostalgia for simpler times emerges in a number of prints, such as in Asa Cheffetz’s Midsummer Vermont wood engraving, which draws viewers into a bucolic scene of rolling fields and quiet farmsteads. On the other hand, all the signs of modernity are present in Dorothy Hay Jensen’s linocut Million Dollar Bridge, showing an austere industrial landscape filled with towering infrastructure and billowing smokestacks.

The prints assembled for this exhibition tell a richly visual narrative, one that reveals a decade in flux, which is at once leaning toward the future and looking back to the past.

The 1930s in Prints: A Gift to Kansas City from The Woodcut Society • Nelson-Atkins Museum of Art, Kansas City, Missouri • to May 21, 2017 • nelson-atkins.org