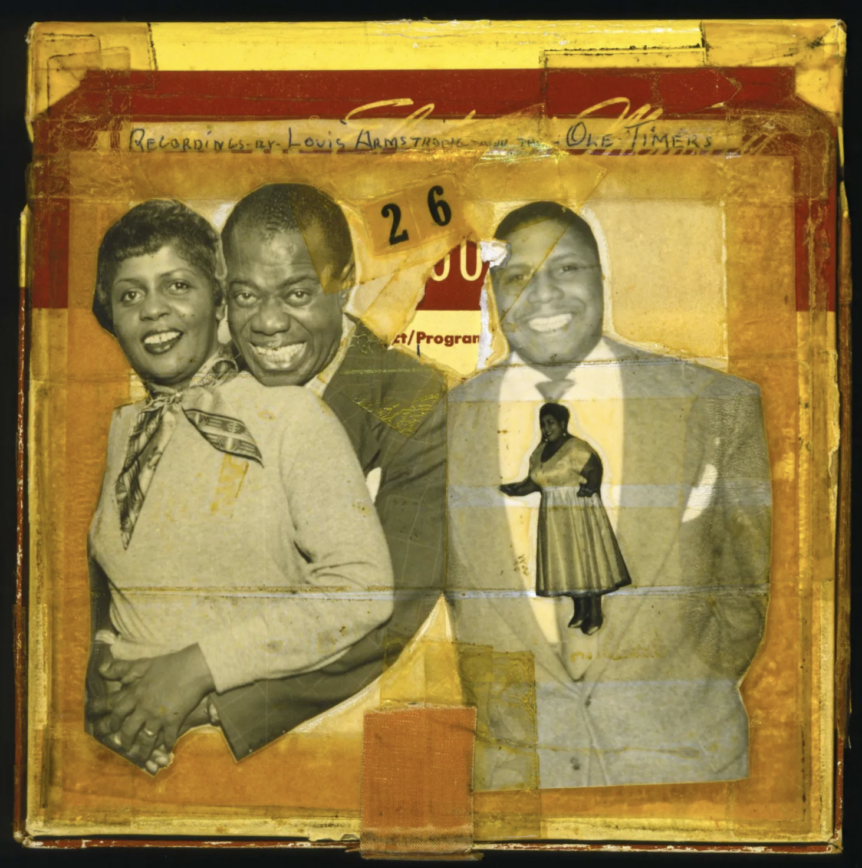 The Louis Armstrong House Museum is physically situated in Queens, New York; a modest home that was inhabited by Armstrong and his wife, Lucille, from 1943 until their passing. It’s virtual location – That’s My Home– captures the comfort of the abode; particularly poignant at a time when many of us have to remain inside. The virtual exhibits, album track collections, videos with jazz historian and educator Hyland Harris, and virtual tour of the house all make use of the museum’s extensive digital collections. Containing more than 60,000 items, the digital collections are extensive enough to warrant their own series of visits.

Of the virtual exhibits, one of the most striking is “A Little Story of My Own”: Armstrong and Collage. The inimitable jazz musician was also a prolific maker of Scotch-taped collages, and he made extensive recording of conversations that can be listened to as part of the exhibit. Both the collages and recordings are a treat – lending a very intimate and unique lens for us to view the great Satchmo.

British art dealer Philip Mould – familiar to many from the BBC program Fake or Fortune? and responsible for major discoveries of Thomas Gainsborough, Anthony Van Dyck and Thomas Lawrence works – has produced an extended series of videos from his home at Duck End in Oxfordshire. The first in the Art in Isolation series has Mould giving a brief history of his home, and some highlights from his personal collection connected to the home. Subsequent videos follow a similar format, some of the highlights of which are:

Philip Mould & Co. have even more videos outside of this series, which you can enjoy on their YouTube channel.

The Irish Georgian Society has recently shared a 1993 film charting the development of the Irish “country house” from castles to Palladian mansions available to watch on Vimeo. Narrated by Anjelica Huston, the film visits some 40 locations across Ireland and explores how ideas of the country house changed over time. Special emphasis is given to the Georgian era, with both aerial and detail views, and – I feel I must note – Huston’s voice and lilt make it a particularly pleasant listen.

Dr. Sushma Jansari, curator of South Asian art and artifacts at The British Museum,  writes and records – sharing conversations with colleagues across the cultural and higher education sectors –  Wonder House, a platform for a podcast and articles that offer a behind-the-scenes look at the museum’s collections. Two notable entries are:

While nothing can replace the feeling of live music, the London Philharmonic Orchestra has created a new series of digital initiatives to bring the spirit of live performance into our homes. LPOnline – consisting of Playlist Concerts, Performances, and Behind the Music videos and recordings – is a blend of serious and playful pieces created from isolation. Themed playlists are also available on Spotify; perfect for a drive or a socially-distanced walk. Two TMA favorites from the collection: