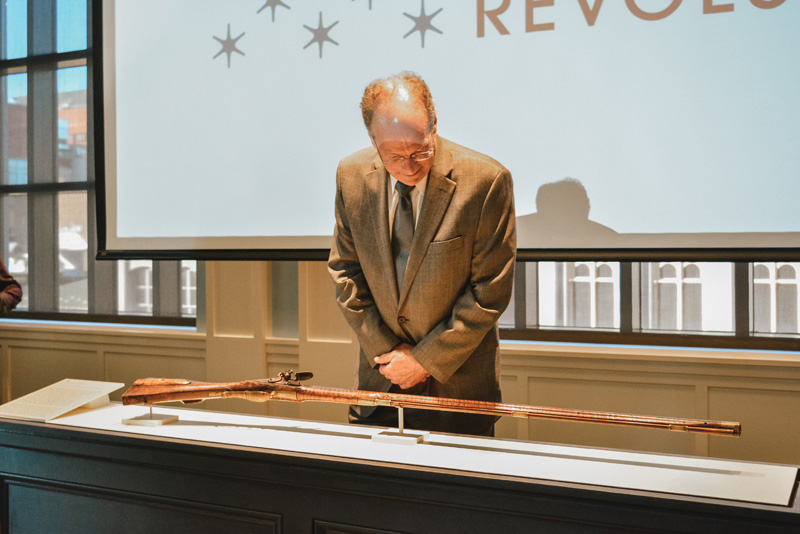 On October 2, 1971, a rifle dating from the American Revolution was stolen from the Valley Forge Historical Society in rural Pennsylvania. Its whereabouts were unknown until last year, when it was rediscovered by New Oxford, PA-based antiques dealer Kelly Kinzle.

“On July 5, 2018 I went on a house call in the loft of a barn,” Kinzle explains. “There were many, many items but none of any real value”—the collector was a habitual flea market shopper who bought comprehensively—“and the last item he pulled out was this rifle. It reminded me of something but I didn’t know what.”

A flintlock made out of curly maple, about five feet long, it was built in the style of “Kentucky” long rifles, probably developed by Pennsylvania Germans for hunting, with a grooved bore that imparts spin and increased accuracy to fired bullets. The rifle’s stock was engraved with a date, “1775,” and its place of manufacture, “Christian’s Spring” (Pennsylvania), as well as a name, “Oerter.”

Kinzle recognized the surname of Johann Christian Oerter, a well-known Moravian gunsmith working in Pennsylvania’s Lehigh Valley in the mid-1700s who supplied long rifles to the rebels during the early stages of the revolution. “I went back to my reference books and found the exact example, which was described as stolen from the Valley Forge Historical Society.”

Since the famous 1990 art heist at the Isabella Stewart Gardner Museum in Boston, any theft that occurs from a nonprofit organization is a federal crime. Kinzle’s lawyers Jay Robert Stiefel and Albert Oehrle put him in touch with a Montgomery County, PA, detective who opened the file on the rifle burglary. It was the first high-quality lead his department had gotten in forty-seven years. Shortly after, the rifle was turned over to the FBI’s Art Crime Team.

In a ceremony last Friday, the Oerter rifle was repatriated to the Pennsylvania Society of Sons of the Revolution, who immediately loaned it to the Museum of the American Revolution in Philadelphia. The rifle is now on view alongside the exhibition Cost of Revolution: The Life and Death of an Irish Soldier, until March 17, 2020.

“It is deeply gratifying to be able to return to this rare artifact to public view after nearly fifty years,” the museum’s CEO and president Dr. R. Scott Stephenson said in a statement. “The Christian Oerter rifle exhibits exemplary early American artistry and is a reminder that courage and sacrifice were necessary to secure American Independence.”

“We’ve had controversial pieces come through our shop, but never something like this,” says Kinzle. The thief remains unidentified.

[Albert Oehrle was originally identified in this story as being the Montgomery County, PA, detective. This story was updated and corrected on 11/8/19.]
Share: