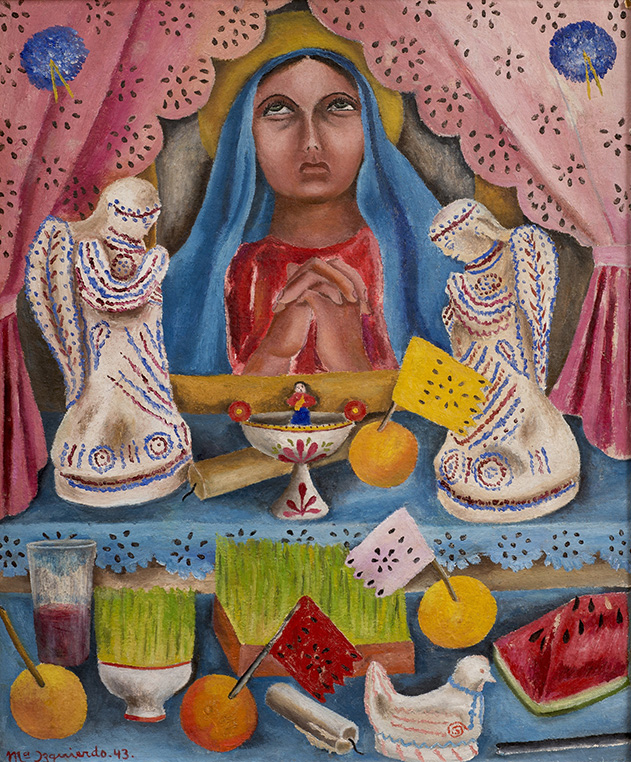 This fall the Philadelphia Museum of Art presents two exhibitions about art and artistry that upended the cultural apple cart—albeit in vastly different times, places, ways, and contexts.

Our Lady of Sorrows by María Izquierdo, 1943. Private collection.

September 3 saw the debut of Classical Splendor: Painted Furniture for a Grand Philadelphia House—a showcase for a suite of furnishings designed by the architect Benjamin Henry Latrobe and fabricated in 1808. In his designs for the ebonized and gilded seating pieces and tables—featured in our pages earlier this year (The Magazine ANTIQUES, March/April 2016)—Latrobe took direct inspiration from the furniture forms and decorative motifs of ancient Greece. Together with the magnificent town house Latrobe designed for clients William and Mary Waln, the lavish furniture shocked and awed staid Quaker Philadelphia society. But it also set a new aesthetic standard for both the city and the nation, as the show’s curator, Alexandra Alevizatos Kirtley, wrote, “transforming Philadelphia’s—and indeed America’s—interpretation of classical art.”

Some one hundred years later and some two thousand miles to the south and west, another aesthetic transformation was born—this one of bloodshed. Paint the Revolution: Mexican Modernism, 1910–1950, opening October 25 and billed as the most comprehensive exhibition of its kind in more than seven decades, will explore the new artistic vision that emerged in the decades following Mexico’s violent agrarian uprising of 1910. Along with the dictator Porfirio Díaz, the revolution swept out the academic art and other Belle Époque trappings of his regime. In their place, Mexican artists developed a wholly original and lush visual culture that took its energy and imagery from the spectrum of folk traditions. These ranged from the colorful pageantry of the fiesta and artisanal motifs to figurative folk art and popular myths and legends—especially those of the country’s long browbeaten and excluded indigenous people. The central figures in this movement are known as “los tres grandes”—the Big Three—the muralists Diego Rivera, José Clemente Orozco, and David Alfaro Siqueiros. In a country with staggeringly high rates of illiteracy, murals played a pivotal role as painted oratory; telling stories and stirring spirits, these public works helped create a new Mexican sense of national identity. Since walls do not travel, the Philadelphia Museum will use digital projections to convey the richness and power of murals by the Big Three.

The exhibition will also highlight the work of lesser-known talents such as the artist and teacher Alfredo Ramos Martínez, who was influential in both Mexico and the United States. Students such as Siqueiros credited his plein air painting schools with inspiring the muralist movement. As an expatriate, in the 1930s and 1940s Ramos Martínez helped popularize murals as public art in Los Angeles.