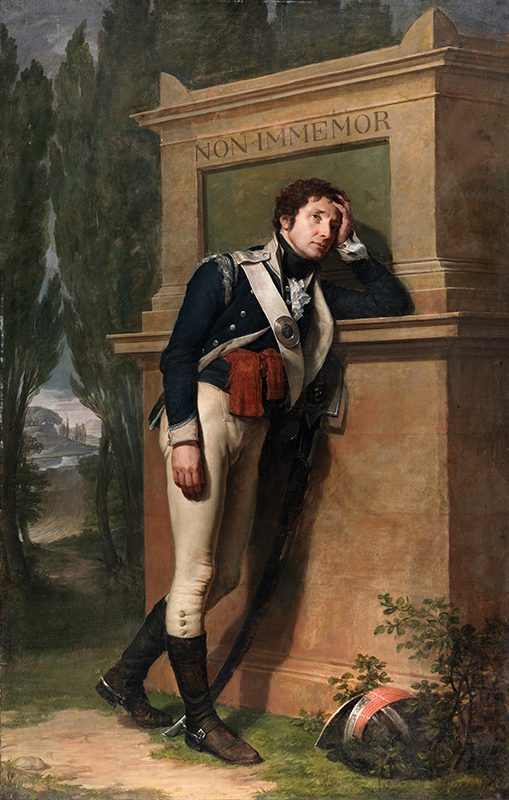 For the past sixty years, two paintings of Revolutionary War battles fought near Philadelphia have puzzled historians. Created by Italian artist Xavier della Gatta in 1782, the paintings vividly and accurately depict engagements at Germantown (Fig. 1) and Paoli (Fig. 3), both part of the British campaign to capture Philadelphia in 1777. Della Gatta, however, never set foot in America. That left historians asking: Why did this Italian artist choose to paint these Pennsylvania battles and how was he able to represent them correctly? Careful detective work has revealed answers in the life of Richard St. George, an Irish officer in the British Army and a veteran of both battles (Fig. 2). The Museum of the American Revolution’s special exhibition Cost of Revolution: The Life and Death of an Irish Soldier will tell St. George’s story.

Richard St. George is a name found in few histories of the American Revolution. Yet, his dramatic journey through the Revolutionary era is one of the most visually rich stories of a person who was not a politician, a nobleman, or a high-ranking military officer. For the first time in a public exhibition, Cost of Revolution will reunite from across the globe twenty-two pieces of art (from cartoons and sketches to portraits and scenic paintings) that St. George is known to have posed for, created, or helped to create, including Xavier della Gatta’s paintings of Germantown and Paoli. When considered together, this art documents a twenty-year period in St. George’s life in which he fought against two revolutions, one in America and another in Ireland, losing his health, his wife, and ultimately his life in the process.

St. George served in the British Army in America from 1776 to 1778. Before he sailed off to war, Thomas Gainsborough had painted his portrait (Fig. 2). A fellow officer named Martin Hunter remembered that St. George drew caricatures on campaign. He also described St. George’s aggressive battlefield leadership, calling him “military mad.” During the Philadelphia campaign, St. George served as a lieutenant in the 52nd Regiment’s light infantry and fought at Cooch’s Bridge, Brandywine, Paoli, and Germantown. But the severe head wound he received at Germantown halted his army career. One of the first casualties of the day when a gunshot fractured his skull, he was carried off the battlefield by a light infantry corporal named George Peacock. He drew a sketch of himself being carted off, and added a tongue-in-cheek title: My Triumphant Entry into Philadelphia (Fig. 5). In the city, he endured a procedure called trepanation, in which a section of his skull was removed, and later replaced by a silver plate. St. George would suffer head pains for the rest of his life, wearing a black silk cap to cover his wound and a black robe as a sign of his misery (Fig. 7).

St. George returned to Ireland and an acquaintance noted that, though he continued to sketch, he now drew “melancholy or horrific subjects.” A self-portrait in a ruinous landscape with two demonic figures peering at him may reflect one of St. George’s periodic hallucinations caused by his head injury or the laudanum he took to relieve the pain (Fig. 6). Seeking a warmer climate to ease his agony, St. George traveled to Italy, stopping for a time in Naples, where he met artist Xavier della Gatta. Della Gatta created the paintings of the battles of Paoli and Germantown based on St. George’s eyewitness testimony and wartime sketches. The paintings, which St. George probably commissioned, capture the violence of the Revolutionary War with unmatched detail and accuracy. In the foreground of the Germantown scene della Gatta depicted St. George being carried off the battlefield (Fig. 8).

St. George also associated himself with leading figures of the early romantic era, such as the poet and philosopher Sir Brooke Boothby, painter Henry Fuseli, and poet Anna Seward. Fuseli is best known for his 1781 painting The Nightmare, once owned by Boothby and now in the collection of the Detroit Institute of Arts. In 1783 St. George hosted Fuseli, Seward, and Boothby at an estate he owned near Bristol, England, for a medieval costume pageant. Boothby and Fuseli dressed as a knight and a wizard, while Seward sang poetry in the guise of the “Muse of Elegiac verse.”

St. George’s life took another dark turn when his wife, Anne Stepney St. George, died from an illness four years into their marriage (Fig. 9). He wrote to Fuseli, describing his anguish, and commissioned a portrait that could be used to express his grief to his sons. He shared his plan to have the painting, along with the portrait of his wife, kept in a locked room in his home, only revealing them to his sons when they were mature enough to understand their father’s emotions. For an unknown reason, Fuseli seems to have never painted the portrait. Instead, Irish artist Hugh Douglas Hamilton painted St. George grieving at his wife’s tomb (Fig. 10).

By the late 1790s St. George had returned to Ireland to oversee his estates, and he was back in uniform. Insurrection was in the air. A growing movement, led by the United Irishmen—a radical republican organization inspired by the American and French revolutions—sought to establish a nation independent of British rule. St. George strenuously and vocally opposed the group’s recruitment efforts, and on February 9, 1798, he was attacked and killed by a group of tenants sympathetic to the United Irishmen’s cause. Word of his death set a tense nation further on edge. The United Irishmen launched a full-fledged revolt in May. Beset by mishaps, betrayals, and miscalculations and out-gunned militarily, the United Irishmen were defeated within a few months. Between battles and subsequent British reprisals, an estimated ten-to-thirty thousand Irish people of all loyalties are believed to have died in the Irish Revolution of 1798. Richard St. George, defender of crown authority at home and abroad, was one of the conflict’s first victims.

Cost of Revolution: The Life and Death of an Irish Soldier is on view from September 28 to March 17, 2020 at the Museum of the American Revolution in Philadelphia.

Matthew Skic is associate curator at the Museum of the American Revolution and the lead curator of Cost of Revolution. He is a graduate of the Winterthur Program in American Material Culture and joined the museum staff in 2016.