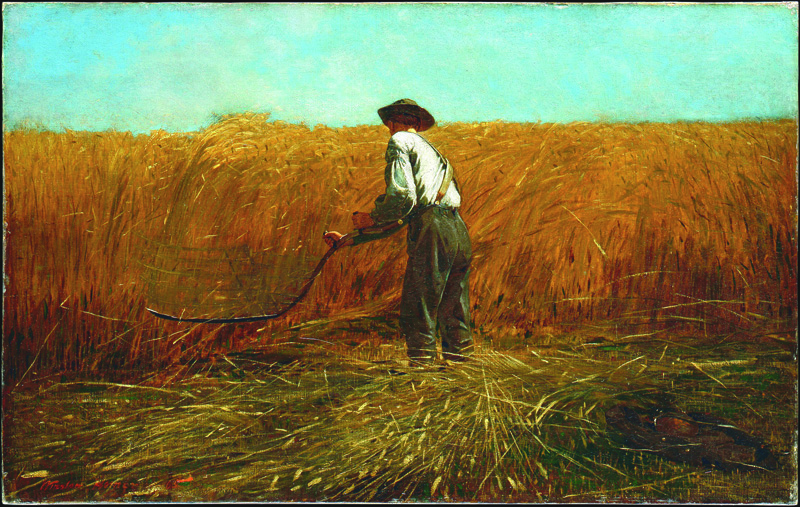 “Eastern people
have formed their conceptions of what
the Far-Western life is like, more from what they have seen in
Mr. Remington’s
pictures than from
any other source.”

“Winslow Homer is an important figure in the annals of American art, and the period in which he lived and wrought, the last half of the nineteenth century, produced no American painter so thoroughly national in style and character. He was the most original American painter of that time, and at the same time the most representative. His art was intensely personal and intensely American.”

Placing your finger on what is “American” is a hell of a difficult task. In a country that is an amalgam of people with diverse experiences, homing in on a consensus of what is or is not American is ever elusive. During the second half of the nineteenth century, however, artists Winslow Homer and Frederic Remington struck a chord with audiences that identified them as, above all else, American.

Homer and Remington were born a generation apart and there is no solid evidence they knew one another personally, but, coincidentally, they died within a year of each other. Homer lived a long life, and his career had reached its full maturity by the time of his death at the age of seventy-four. Remington, in contrast, died unexpectedly when he was forty-eight, his career cut short at a crucial moment when he was just arriving at his mature style. Both artists were oil painters first, although they are equally celebrated for their excellence and innovation in a second medium: Homer in watercolor, and Remington as a sculptor in bronze. Homer is known as a painter of the New England coast, while Remington reveled in the drama of the American West. Nevertheless, despite their obvious differences, the two share common experiences and themes that in part account for why they continue to appeal to us as quintessentially American.

Homer was born in Boston, Massachusetts, to a family with deep New England roots. Remington, born in upstate New York, was the son of a Civil War colonel whose family immigrated to New England in the early eighteenth century. They shared an upper-middle-class upbringing that positioned them securely in an Anglo-Saxon Yankee culture. Part of their working careers were spent east and west of the Adirondack Mountains and in the city of New York; and they both lived in close proximity to New York during critical years while their careers developed.3 Homer retreated to the Adirondacks and spent time in other spots along the way before ultimately settling on the coast of Maine. Remington never severed his connections to his boyhood home near Ogdensburg, New York, just west of the Adirondacks. Each constructed a life and image, through their art and their personas, that was a combination of urban cosmopolitanism and rural masculinity.

Both consciously chose not to study in a foreign atelier, but they often felt the need to rise above the criticism of being self-taught. If critics or fellow artists slighted their work on technical grounds, there were others who celebrated them as independent, original, and homegrown. William Howe Downes, in his 1911 authorized biography of Homer, called him “an original force in art from the first”; and, in 1909, a New York Times critic declared that “Remington was a painter and illustrator whose large fame was founded on positive originality. His touch and his point of view were entirely his own. He belonged to no school and he had no master.”4 Their early artistic experience as illustrators shaped the rest of their work and provided them with a practical education rather than a formal one. They learned the elements of design, matured as draftsmen, and gained valuable insights related to the business of art. This unconventional, pragmatic learning was both positive and negative. Above all, working as commercial illustrators on assignment gave each an opportunity for life-altering experiences, and while pursuing these, they became household names.

In October 1861 Homer went south to cover the American Civil War for Harper’s Weekly. He brought images of the war into people’s homes through innovative, creative illustrations that were direct and democratic. They ingratiated him to an American public keen for images of the action that they would otherwise be unable to see, as in his painting Sharpshooter, (Fig. 3).

During and after the war, Homer was among the few artists who exhibited paintings on Civil War subjects at the National Academy of Design and other notable venues. His realism was unconventional in comparison to the sublime landscape pictures among which his paintings were routinely exhibited. A celebrated early painting, The Veteran in a New Field (Fig. 4), depicts a Union soldier scything hay, evoking the nation’s return to a primarily agrarian life after the war has ended. Homer’s genre scenes distill down-home stories of daily life in both the North and the South, capturing the country as it began the long process of Reconstruction.

Remington’s opportunity for a similarly defining event came in the form of the Spanish-American War in 1898. By that time, he was already a well-known figure to the American public. He had been supplying Century Magazine, Collier’s, and Harper’s Weekly with illustrations of the American West, particularly the conclusion of the Indian Wars. He even accompanied Theodore Roosevelt’s Rough Riders as far as the Battle of San Juan Hill in 1898, having previously illustrated Roosevelt’s Ranch Life and the Hunting-Trail a decade earlier. Remington, who had long glorified the exploits of war, ultimately experienced the grim realities of death up close, which forever changed the tenor of his works. He was no longer quick to dignify conflict, and in the coming years became more interested in painterly surfaces and pictorial poetry, typified by his late painting Sunset on the Plains (Fig. 5).

Homer and Remington would ultimately shed their illustrator beginnings and mature into skilled painters who at times treated the same universal themes, above all man’s relationship to nature. Whereas Homer’s works often express man confronting nature’s power, as in The Fog Warning (Fig. 1), and Undertow (Fig. 10), Remington regarded the wilderness as but a single hazard and man as perhaps a greater threat, an idea that is evident in his painting Ridden Down (Fig. 2). Whether depicting a raging sea or the vast western landscape, both artists seem to have returned repeatedly to such themes to explore their seemingly endless symbolic possibilities.

Homer and Remington created some of their greatest works between 1889 and 1909. This is the only period in which they were simultaneously at the pinnacle of their creative talents. The last decade of Homer’s life was plagued by poor health; and although he continued to work prodigiously in watercolor, he completed few oils. However, in his last years, Homer created some of his most intriguing paintings as well as works that are distilled to their essence. In his final decade, the work more often centers on mortality, as evident in The Gulf Stream (Fig. 7), which “is clearly about human mortality, about man’s lonely confrontation with death.”5 His last painting, Driftwood (Fig. 6), is his culminating statement on this theme. One cannot help but regard these works as the manifestation of the artist’s own self-examination. Suffering from chronic stomach ailments and a stroke in 1908, Homer could foresee that he did not have long to live; he died two years later.

Remington’s death was sudden, following an attack of appendicitis in 1909, with no warning of the brevity of his life. His final decade is remarkable for his eagerness to experiment with new, ambitious work. A contract with Collier’s for one painting a month allowed him for the first time to paint subjects solely of his choosing. During this period, he adopted impressionist-style brushwork and a high-key palette, a new direction exemplified by The Long-Horn Cattle Sign (Fig. 9). His most complex paintings, both technically as well as conceptually, are his nocturnes. In these paintings, Remington moved away from detailed images based on narrative storytelling and adopted a more symbolic approach, the impact of which is both haunting and fearful; see, for example, In from the Night Herd (Fig. 8). He was an astute marketer of his work, succeeding commercially at a level rarely achieved by artists of that day. His financial success was accompanied by public admiration and, finally, critical acclaim. It was in the last decade of his life that he created all of his most sophisticated paintings and became a revolutionary sculptor and a prodigious writer.

Homer and Remington are inextricably connected by the time in which they lived, during which industrialization, modernization, and urbanization rapidly challenged social constructs. Debates over the value of nature and traditional masculinity took place alongside disputes over immigration and the definition of what it is to be an American. Despite this shared context, Homer and Remington have not been considered together until now, in part because their work is so deeply associated with two regions of the country that are defined by geographic and cultural differences. One can learn much about late nineteenth-century America by simultaneously considering the respective visions of the two artists. “American” continues to be a contested label, and as we continue to try to resolve its meaning, the work of Homer and Remington remains acutely relevant.

This article is excerpted and adapted from the prologue to Homer | Remington by Margaret C. Adler, et al., co-published by the Denver Art Museum, Amon Carter Museum of American Art, and the Portland Museum of Art. The book serves as the catalogue for Natural Forces: Winslow Homer and Frederic Remington, which will debut at the Denver Art Museum before traveling to the Portland Museum of Art in Maine, and the Amon Carter Museum in Fort Worth, Texas. Consult denverartmuseum.org for scheduling details.