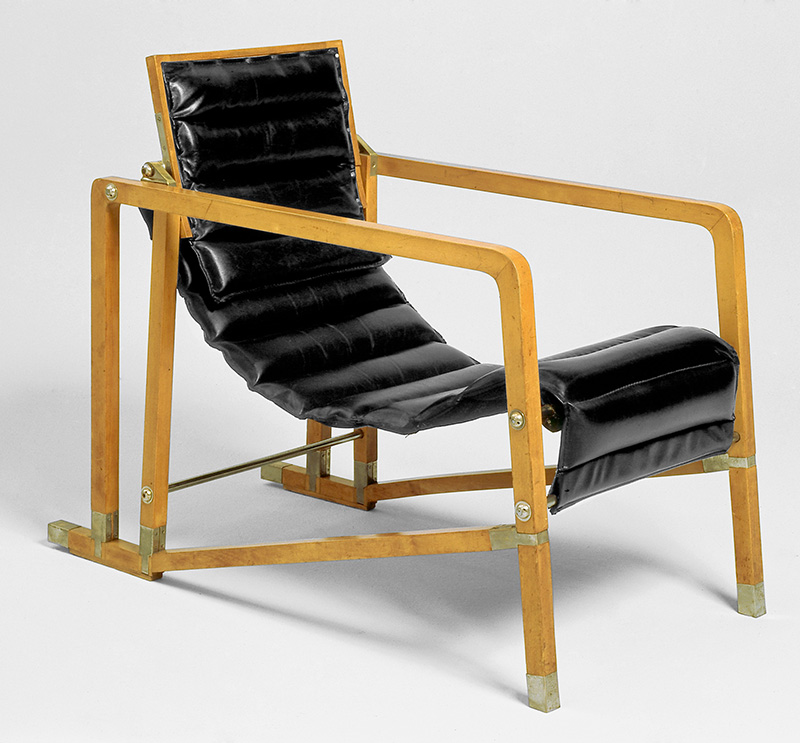 Eileen Gray might be called a Renaissance modernist. During her seventy-year creative career, Gray spent time as a painter, photographer, cabinetmaker, furniture designer, lacquer artist, architect, and gallery-owner. In New York, the Bard Graduate Center has mounted an exhibition that is the first ever in the United States to explore the full range of Gray’s accomplishments.

The exhibition is organized into five chronological sections. It begins with Gray’s training at London’s Slade School of Fine Art, then examines the opening of Galerie Jean Désert in Paris in 1922 (Gray’s gallery, disguised by a male pseudonym), and ends with a focus on her evolution into architecture. While studying at the Slade, she served an apprenticeship at a lacquer shop, a choice that would ultimately form the foundation for the rest of her career. When she moved to France in 1902, Gray trained with the Japanese master of lacquer Seizo Sugawara, learning the nuances of the highly specialized field. By 1913, Gray was herself a notable lacquer artist, displaying her work at the 8th Salon de la Société des Artistes Décorateurs, and created side tables and a screen for the French fashion designer and art collector Jacques Doucet. From there, Gray moved into furniture design. As tastes began to change in the 1920s, Gray adopted modern materials—tubular and sheet metal—into her designs and began to demonstrate an interest in architecture and geometric form. After being introduced to Jan Wils, Bauhaus founder Walter Gropius, and Le Corbusier, she made her move towards architecture.

Bard’s exhibition focuses on new research and documents—architectural plans, letters, sketchbooks, and drawings—related to Gray’s architectural work, most specifically her 1926–1929 residential project E 1027. Built with the assistance of her partner and then-lover, Jean Badovici, E 1027 is Gray’s most celebrated building, a modernist villa overlooking the sea on the French Riviera. Gray was inspired—like other architects of her time—by the flat-roofed white houses she saw in Algeria. E 1027 was a groundbreaking marvel of spatial economy. The interiors of the house could change form and function in an instant thanks to cabinet doors that morphed into walls, beds that doubled as sofas, and headboards with side attachments that could become a lampstand one minute and a writing table the next.

Much of the furniture at E 1027 was built into the walls, but the few furnishings that were not included her iconic “Transat” armchair and her most familiar piece of design: the E 1027 side table. The lightweight piece is composed of a circular glass top on a tubular metal frame with a single height-adjustable leg. Lower the top and you have a chaise-side drinks table; raise it and enjoy breakfast in bed without spilling any crumbs. Gray preferred a minimalist look and left the exterior white to draw the eye toward the natural color of the building’s surroundings. (Gray was enraged when Le Corbusier took it upon himself to paint murals in the house between 1938 and 1939.)

The New York show includes approximately two hundred examples of Gray’s work, and in addition the Bard Graduate Center has produced In Conversation with Eileen Gray, a film based on an unpublished 1973 interview with Gray, just three years before her death, when she had become all but forgotten. The documentary is being screened during the run of the show, and clips are incorporated into exhibition displays.