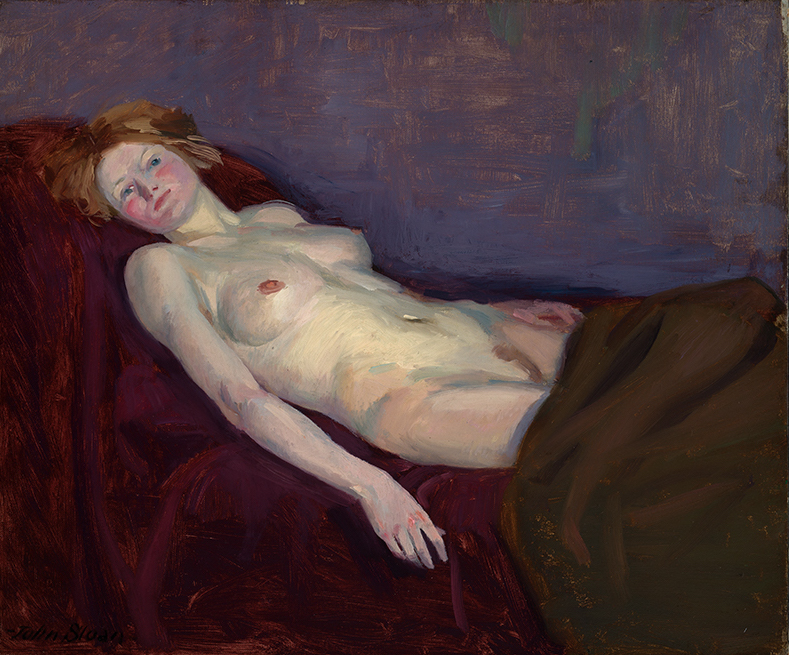 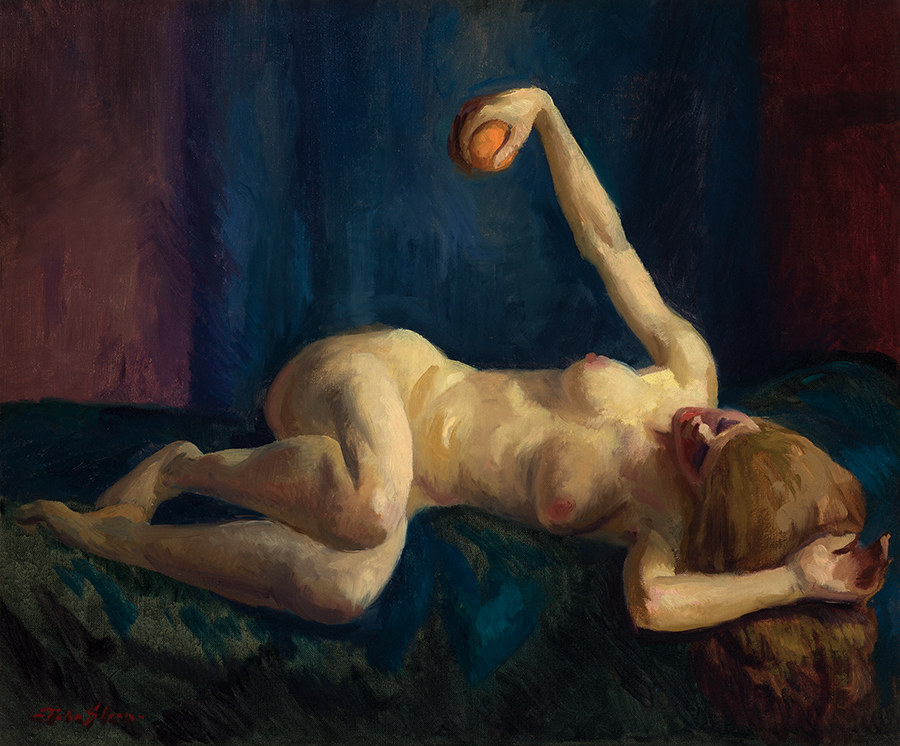 Famous for his paintings of New York City life in the early twentieth century, John Sloan had a career spanning six decades and encompassing illustrations, landscapes, portraits, and nudes painted in Philadelphia, New York, Gloucester, Massachusetts, and Santa Fe, New Mexico. While new articles, books, and dissertations addressing his city subjects are released regularly, other aspects of his career have remained relatively understudied. Recent work by John Fagg, Elizabeth Kennedy, and Kimberly Orcutt suggests that the nudes of the Ashcan school, Sloan’s included, are due for serious consideration by art historians and curators.1 The retrospective exhibition An American Journey: The Art of John Sloan, on view at the Delaware Art Museum from October 21 through January 28, 2018, provides a rare opportunity to study a wide range of Sloan’s nudes in paintings, etchings, and drawings.

Sloan’s background in figure painting can be traced to Philadelphia, where he attended classes at the Pennsylvania Academy of the Fine Arts in the 1890s. Life study was at the center of the academy’s program under Thomas Anshutz, and Sloan recognized the value of the practice. In March 1893 he and other young artists and illustrators—including Robert Henri, William Glackens, and Joe Laub—founded the Charcoal Club, which met in a photographer’s studio to draw directly from models in the evenings. The club offered a relaxed atmosphere where “work went on late, and beer was required when the artists felt exhaustion creeping over them.”2 Sloan produced delicate watercolors of nude and clothed models (Fig. 4) that give little sense of the club’s lively ambiance, which was captured in a photograph of more than twenty members and a model, “Gypsy” Novello (Fig 3). 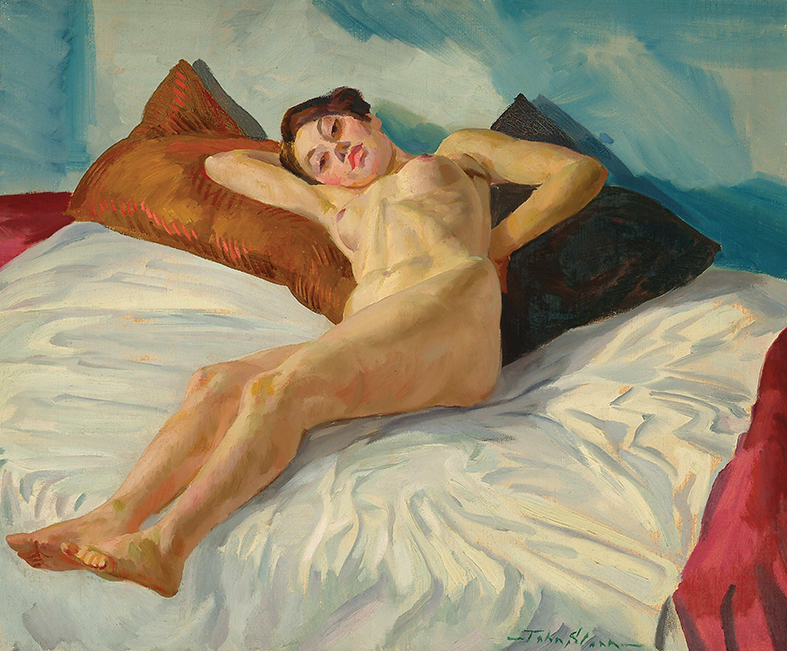 After his student years, Sloan’s career as a newspaper illustrator provided few opportunities for life drawing. His early paintings were Philadelphia street scenes and portraits of friends and acquaintances; he rarely employed professional models until he moved to New York in 1904. Here, Sloan occasionally hired models for portraits such as Spanish Girl (Fur Hat, Red Coat) (1909), and genre scenes such as The Cot (1907), both of which seem to have started as nudes that the artist ultimately painted out.3 It was not until 1912, when a portrait commission allowed him to rent a studio separate from his apartment for the first time, providing space and privacy, that Sloan produced oil paintings of nudes that he felt worthy of preserving. 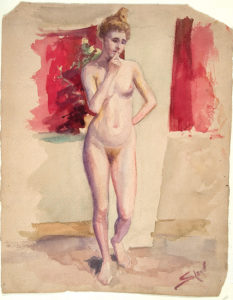 Sloan later described the nudes from 1913 as evidence of his enthusiastic exploration of color relationships based on Hardesty Maratta’s color system, which associated colors with musical notes and encouraged painters to organize their palettes based on chords of color. Sloan recalled these canvases as “a series of cool delicate portraits and figures with special interest in blue-violets and rose notes.”4 Half-Length Nude, Lying Down (Fig. 8) perfectly fits this description, but the picture is also earthy, sensual, and immediate. Red and plum tones play to the model’s fair complexion and strawberry-blonde hair. The paint is fluently handled and the canvas appears to have been completed quickly. Only a few strokes delineate the figure’s features, which are, nonetheless, individualized. Her gaze meets the viewer directly. Other nudes from this period share a similar attitude; several include the model’s discarded clothing in the artist’s studio. John Fagg has described how these paintings relate to contemporaneous nudes by Sloan’s friends and fellow realists Robert Henri and George Bellows: they are “frank and frontal and register a powerful sense of interaction between the artist and model.”5 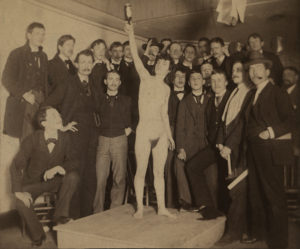 Sloan’s engagement with the female nude permeated his output around this time, emerging as a powerful symbol in his political illustrations. In 1909 Sloan had begun to submit cartoons to the New York Call, a socialist newspaper, but he became frustrated when the editors refused to print his suffrage cartoon titled One of These May Vote in New York State, Which Is It? in 1911 (Fig. 7). Sloan’s drawing features two identical figures, naked except for fig leaves. The text to the right of the image reads: “We might give you a mental expert’s analysis of the brain power of each but that wouldn’t help you. Neither would an endurance test.” Though it is inscribed “1913,” Sloan sketched and described the cartoon in his diary on August 18, 1911, when he showed it to the publisher of the Call, who “thought it a great thing, but feared it was too broad to publish.”6 The publisher’s specific concern was probably obscenity charges. is was the age of Anthony Comstock, whose New York Society for the Suppression of Vice seized circulars at the Art Students League for including examples of work produced in life classes. A few weeks later, Sloan’s wife described what he sarcastically called as “my ‘indecent’ suffrage cartoon” to an attorney, who thought it safe to publish.7 But her effort was to no avail.

The Call ’s reticence to publish such a “broad” cartoon probably encouraged him to join the ambitious group working to revive the socialist magazine The Masses after it ceased publication in August 1912. The magazine was cooperatively edited by a group of artists and writers and declared itself “a Magazine with a Sense of Humor and no Respect for the Respectable . . . Printing what is too Naked or True for a Money-making Press.”8 As if in celebration of this liberal editorial policy, which he helped to craft, Sloan placed nudity at the center of “Adam and Eve—the True Story,” an ambitious set of cartoons that appeared in February and March 1913, in which he presented a radical feminist take on the biblical story, with a massive Eve defending a tiny Adam, who, in one image, hops on one leg in anticipation of reaching the forbidden fruit above him. “He won’t be happy ’til he gets it!” explains the caption (Fig. 6). The magazine would be the primary outlet for Sloan’s nudes in the next few years, leading one wag to remark:

They draw nude women for the Masses
Thick, fat, ungainly lasses—
How does that help the working classes?9

Painting nudes became a priority for Sloan in 1916, the year he quit the editorial board of The Masses and began teaching regularly at the Art Students League, where he dedicated himself to nude subjects, “to keep a little ahead of my students.”10 In the late 1910s and early 1920s, the artist completed several painterly, experimental nudes each year. Some appear to be academic sketches, demonstrating Sloan’s approach to capturing the masses and flesh tones of his models’ bodies. Others, like Blonde Nude with Orange, Blue Couch, feature unusual poses, rich color harmonies, and sensuous, individualized figures (Fig. 1). 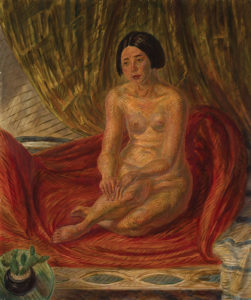 In the mid-1920s, Sloan’s output of nudes accelerated as the human figure increasingly became raw material for formal experimentation. Painted in 1927, Nude Descending Stair, Judson Studio (Fig. 10) and Nude on Couch (White Sheet, Black and Brown Pillows) (Fig. 2) are typical of his nudes from the late 1920s and early 1930s. Models Carmen Harris and Julia Sullivan are positioned in shallow spaces in the artist’s studio. The curves of their bodies are defined against the linear geometry of the walls, stairs, and textiles. Attention is paid to their complexion, which Sloan characterized as “ruddy” and “milk-white,” respectively, while background elements create an appealing play of color temperatures.11

In his nudes from the 1930s and ’40s, Sloan experimented with new poses and painting techniques. He frequently positioned his models in sharp angles (Fig. 5), emphatically denying the elegant S-curve often associated with academic nudes—or even the comfortable contrapposto of Nude Descending Stair, Judson Studio. Figures are tightly framed; the compositions are rarely spacious enough to allow the women to unfold from their contortions. 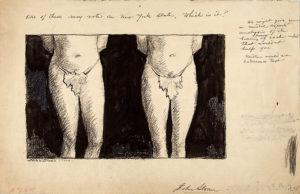 Fig. 7. One of These May Vote in New York State, Which Is It?, 1911. Signed and dated “John Sloan —1913—” at lower left of print, signed “John Sloan” at bottom of sheet, and inscribed JS #2275 at lower left of sheet in a later hand. Ink on paper, 8 by 12 ½ inches (sheet). Delaware Art Museum, gift of Helen Farr Sloan, copyright Delaware Art Museum / Artists Rights Society (ARS), New York.

A relentless experimenter, Sloan adopted a new painting technique in the late 1920s, moving from direct painting in oils to tempera underpainting with layers of oil varnish glazes, and he started to cover his canvases with skeins of thin, colored lines (Fig. 9). Rowland Elzea has explained that the linework was “intended to intensify the solidity of forms and clarify the directions of planes, while interfering with the strength of the underlying color as little as possible.”12  The artist’s goal was no longer a realistic reflection of a particular subject. In Gist of Art (first published in 1939) Sloan explained, “I don’t like a nude that looks too much like human flesh.”13

Sloan’s dedication to the nude in the last third of his career paralleled larger changes in American art, when artists increasingly turned to figures—especially to the female form—in the late 1910s and 1920s. As Teresa Carbone has explained, in a progressively body baring and body conscious culture, the nude became a timely subject for modern American painters, sculptors, and photographers, who responded to classical statuary and Renaissance painting, as well as to Picasso’s postwar figure paintings.14 Reflecting national trends, Sloan drew, etched, and painted hundreds of nudes and counseled his students: “Look on the model with respect, appreciate his or her humanity. Be very humble before that human being. Be filled with wonder at its reality and life.”15

HEATHER CAMPBELL COYLE is the chief curator and curator of American art at the Delaware Art Museum.