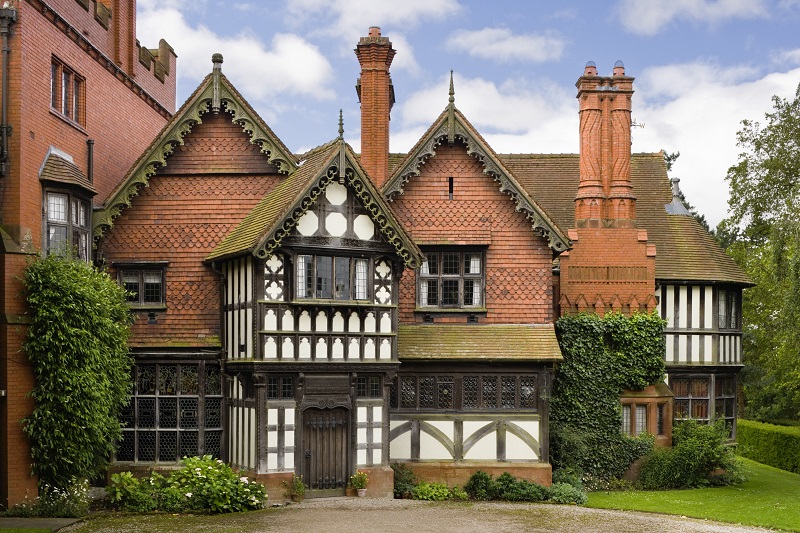 The gables of the two-story entrance porch are edged with intricately carved bargeboards. Photograph by Andrew Butler.

Unlike England’s great country palaces with noble if not always admirable provenances, Wightwick Manor—the name is pronounced wittick—wasn’t built as a dynastic seat, but as a family dwelling. The estate owes its origins to Victorian industry, specifically to the industriousness of Theodore Mander, whose paternal ancestors had established a varnish and japanning works in the Midlands city of Wolverhampton in the later eighteenth century. The business evolved into Mander Brothers, manufacturers of varnish, paints, and inks, and by 1887 Theodore Mander was a partner in the firm. Desiring to move his young wife (felicitously named Flora Paint) and their growing family outside town but within an easy commute, he purchased an early seventeenth-century manor house, built by the Wightwick family, local gentry, and engaged architect Edward Ould, of the Liverpool and Chester firm of Grayson and Ould, to design a new home. 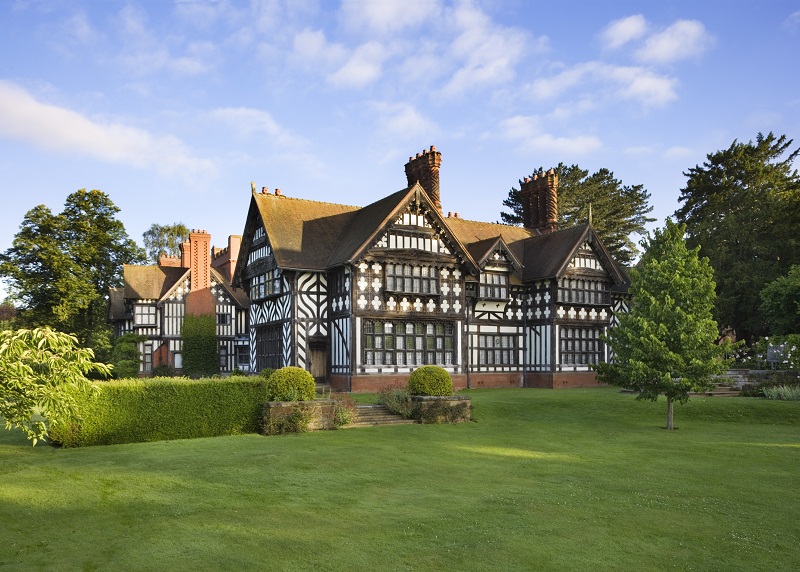 Many Ould clients were part of a large, cultivated middle class, well versed in the writings of John Ruskin and William Morris, and although Mander neither knew nor personally corresponded with Morris, he was in the audience when Oscar Wilde presented his “The House Beautiful” lecture at Wolverhampton in 1884. Mander’s notes, preserved at Wightwick, include the following as rule number one: “Do not use anything which you do not know to be useful or think to be beautiful,” a close paraphrase of one of Morris’s most famous dicta. 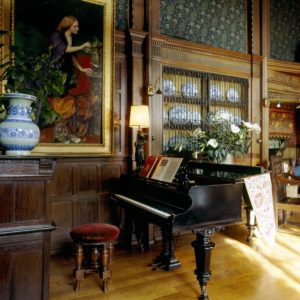 Wightwick, ready for occupancy before Christmas 1888, appealingly combined half-timbering, patterned shingles, red brick, and red roof tiles. It was not a strict reproduction of an actual Tudor house, but a nostalgic idealization. Even today, the welcoming two-story entrance porch, slightly angled between two gabled bays and embellished with a carved owl and carved bat, suggests the portal to an Elizabethan theater, immediately signaling Wightwick’s deliberately quirky charm.

Inside, the original four bedrooms, dining, drawing, morning, and billiard rooms were finely detailed with mullioned windows, carved woodwork, and delicate Jacobean-style plasterwork: a house beautiful, but hardly a house flamboyant. Mander was a prosperous businessman, not independently wealthy. 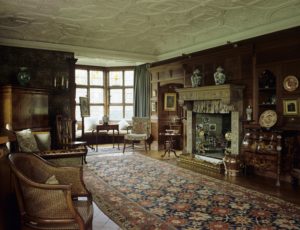 Nevertheless, between 1892 and 1893, Mander—now an alderman keen to entertain more graciously—commissioned Ould to build a new wing, essentially doubling Wightwick’s size: three large reception rooms—including the “Great Parlour”—and five guest bedrooms. Ould outdid himself on the new addition, enriching the vocabulary of half-timbering and leaded window glazing and crowning the multi-gabled roof and its wonderfully carved bargeboards with Tudor-style chimney stacks more elaborate than the earlier ones.

Yet Wightwick combined its nostalgic “Old English” style with pioneering comforts, including a central heating plant (installed in the former stable) that supplied steam and hot water. In 1893 this was supplemented with a generator to light the entire house with electricity. 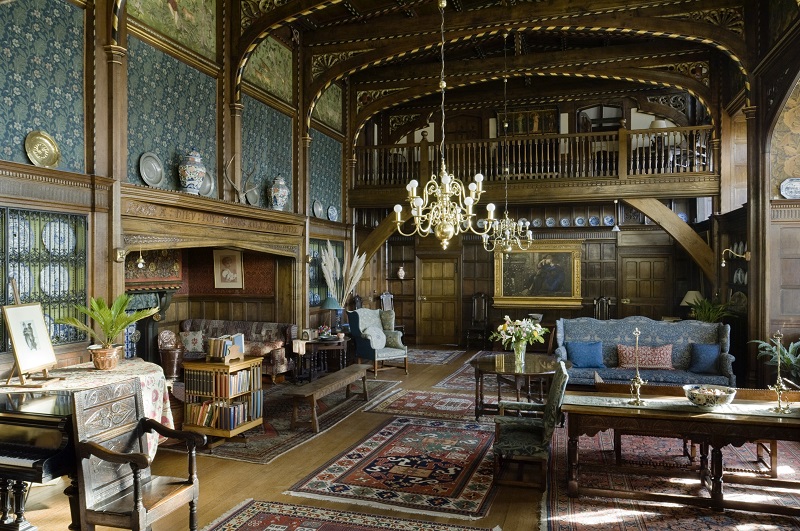 The Great Parlour, looking toward the minstrels’ gallery. The room was added in 1893 with a decorative scheme by Charles Eamer Kempe (1837–1907), and gives the impression of a fifteenth-century great hall converted to a late Victorian living room. The paneling is oak, some of it Jacobean, and the roof timbers and fireplace surround are richly carved. Von Einsiedel photograph.

After moving into Wightwick in 1888, Theodore, Flora, and their four children enjoyed only twelve years before disaster struck: in 1900 Mander, by then mayor of Wolverhampton, died following surgery on a liver abscess. He was forty-seven. His widow died in 1905. The eldest son, Geoffrey, who inherited the property, entered both the family firm and local politics. After his first marriage in 1906, he and his wife, Florence, became notable advocates of women’s suffrage, holding meetings in the drawing room. 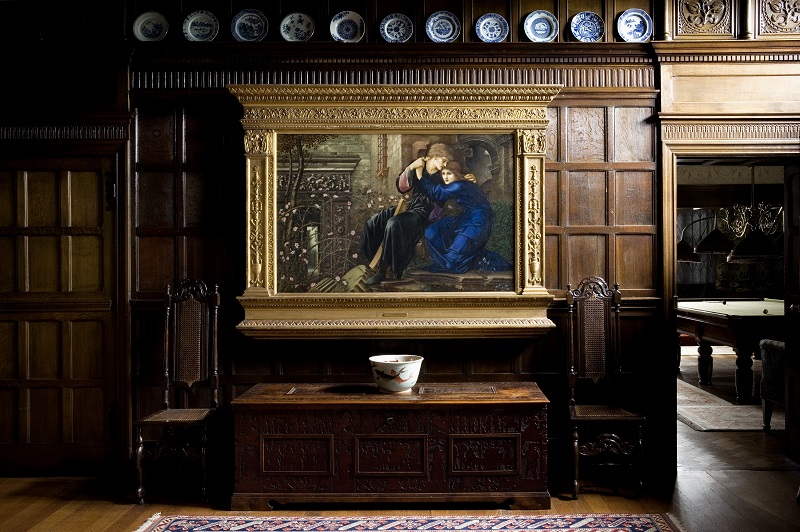 Love Among the Ruins by Edward Burne- Jones (1833–1898), 1894, hangs against the oak paneling of the Great Parlour. Photograph by Paul Raeside.

Wightwick as we now know it, however, developed only after Geoffrey’s second marriage—the first ended in divorce—in 1930, following his 1929 election to Parliament as a member of the Liberal party. His new wife, Rosalie Glynn Grylls, was equally involved in politics—their wedding took place in the House of Commons—and a rising scholar. Her books would include important biographies of Mary Shelley (1938) and Dante Gabriel Rossetti (1965). Moreover, Rosalie’s lectures encouraged a reassessment of Victorian art and literature at a time when it was well out of fashion. 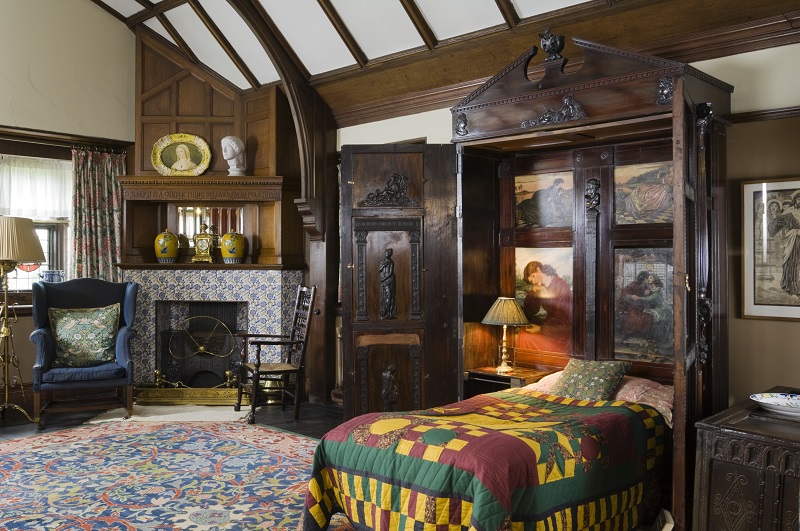 The cupboard with folding bed in the Oak Room. The corner fireplace is lined with Dutch “Persian flower” tiles. The William Morris carpet is hand-knotted and probably dates from the 1890s. Von Einsiedel photograph.

Geoffrey’s parents had intended that Wightwick be an artistic housealong the lines promoted by Morris, Wilde, and, though he’s not often mentioned, the design reformer Charles Locke Eastlake, whose 1868 bestseller, Hints on Household Taste, was in its fourth British edition by 1887. They furnished the rooms with seventeenth- and eighteenth-century antiques and modern pieces, fashionable Persian carpets, antique tapestries, and Japanese and Chinese blue-and-white porcelains; they ordered fabrics and wallpapers from Morris and Company, decorated fireplaces with tiles designed by Morris’s close friend William De Morgan, and installed several windows by the stained-glass designer Charles Eamer Kempe. That most of these original furnishings were still preserved at Wightwick fifty years later was a significant reason the National Trust agreed to Geoffrey’s startling offer to donate Wightwick and its contents to the nation (together with a financial endowment) in 1937. It was the first house to be given absolutely during the donor’s lifetime. 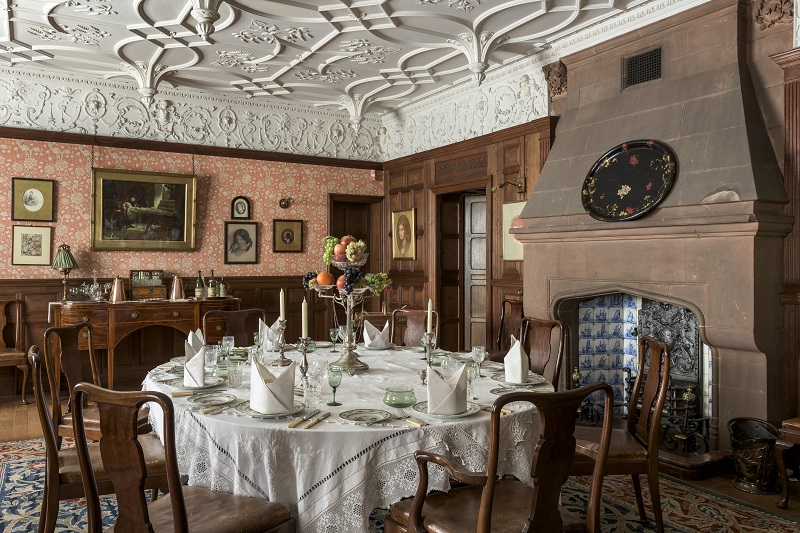 The wooden paneling of Wightwick’s dining room is unpolished walnut; the plaster frieze and strap-work
ceiling with molded ribbed pendants are by L. A. Shuffrey. Von Einsiedel photograph.

The Manders (later Sir Geoffrey and Lady Mander) continued to reside at Wightwick, managing the property under the National Trust auspices—Rosalie in her widowhood from 1962 through her death in 1988. Thanks to them, Wightwick gradually acquired what London art gallery owner and Pre-Raphaelite specialist Rupert Maas declares “the finest personal collection of Pre-Raphaelite pictures in the world—collected with love and appreciation, and set in an arts-and-crafts manor house that is a perfect time capsule.” Maas’s late father, Jeremy, who founded the family’s eponymous gallery, was a friend of Lady Mander and was instrumental in the sale of several works to Wightwick. 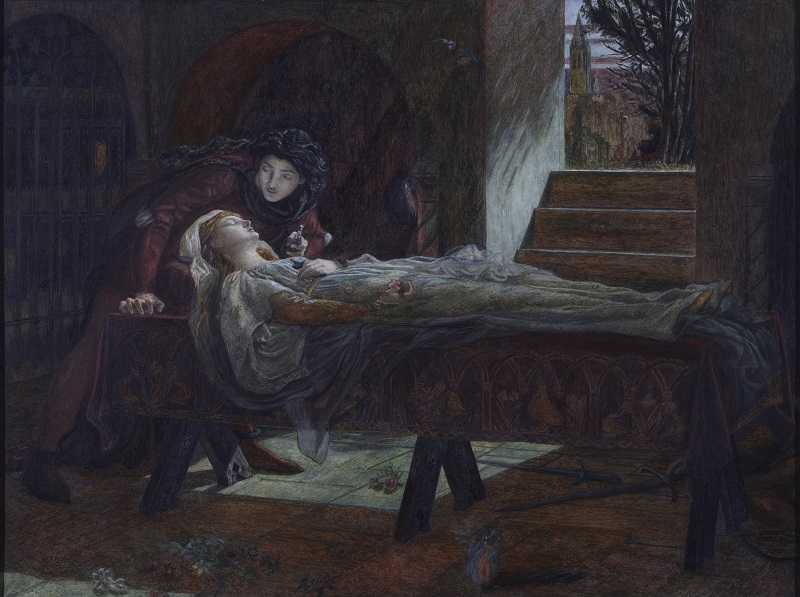 Near her husband’s work hangs Evelyn De Morgan’s moving painting The Mourners. Another of the eleven female artists whose work is in the Wightwick collection is Lucy Madox Brown, daughter of Ford and the wife of writer William Michael Rossetti, brother of Dante Gabriel. And there’s Millais’s portrait of Effie Chalmers Gray with foxgloves entwined in her hair, painted in 1853 when she was married to critic John Ruskin. After that unconsummated union was annulled, Millais himself wed Gray. 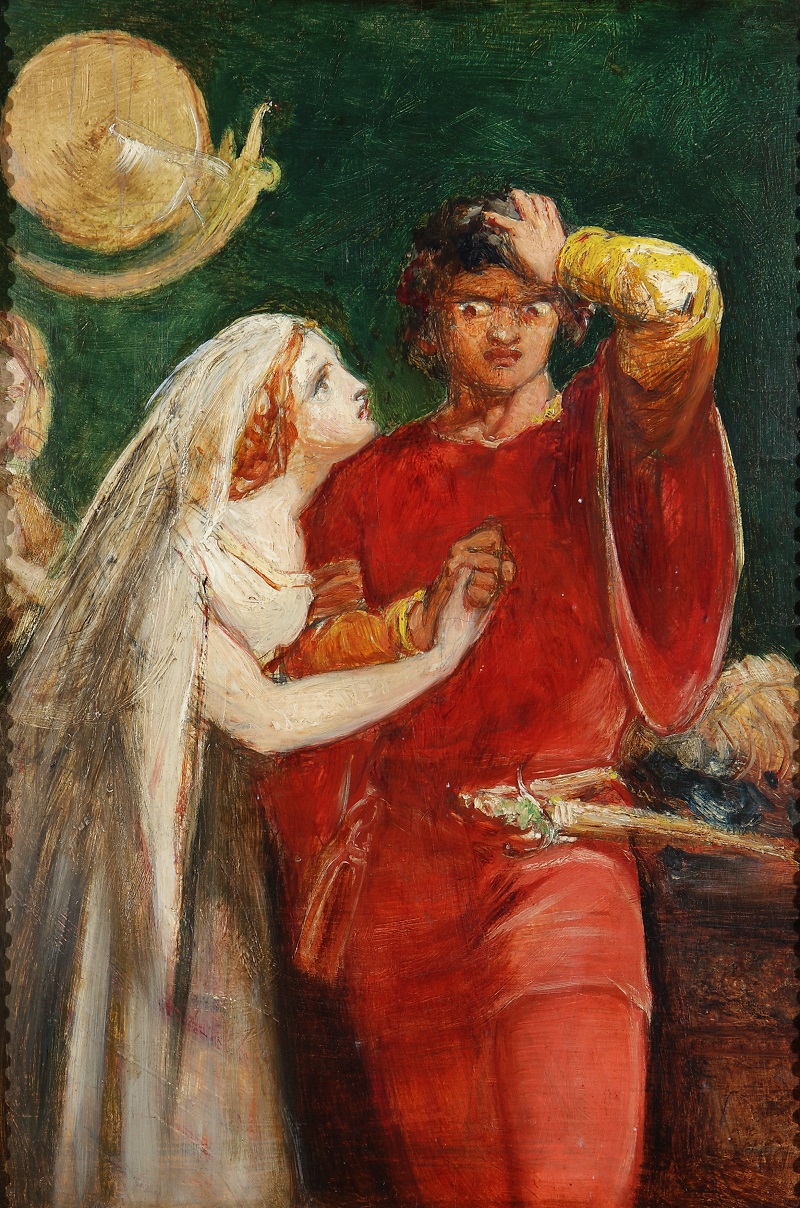 Othello and Desdemona by Millais, c. 1843. A letter dated June 17, 1888, affixed to the back reads, “Dear Sir,/ The sketch of Othello and Desdemona is a very very early performance of yours truly/ J. Millais.” Oil on panel, 13 by 8 7/8 inches. Photograph by Sophia Farley Claire Reeves.

One of Wightwick’s most celebrated canvases, Sir Edward Burne-Jones’s Love Among the Ruins, was painted to replace an 1873 gouache destroyed while awaiting photogravure reproduction at the Paris studio of Goupil & Cie. It depicts young lovers embracing near crumbled columns that symbolize love’s ephemeral nature, and was inspired by the artist’s obsessive affair with the hauntingly beautiful model and artist Maria Zambaco, cousin of Marie Spartali Stillman, another painter represented here.

Wightwick’s decorative objects embody equally vivid associations between their makers and their illustrious contemporaries. For example, the 1893 Oak Roomcontains a set of extraordinary carved furniture with panels painted after Rossetti designs by his studio assistant, Henry Treffry Dunn. Sir Geoffrey acquired them as a result of a 1939 Sotheby’s sale at the Pines, former home of Rossetti’s friends, lawyer Theodore Watts-Dunton (1832–1914) and Algernon Charles Swinburne (1837–1909), whose voluptuous poetic voice might have been prematurely silenced had Watts-Dunton not rescued him from alcoholism in 1879. The folding bed is believed to have been where the author of Atalanta in Calydon slept each night. 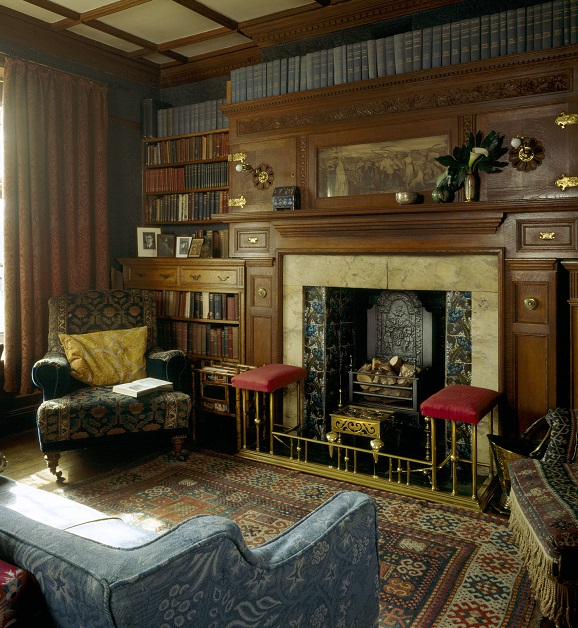 The library, looking from the hall door toward the fireplace. Von Einsiedel photograph.

In the Great Parlour hangs the large portrait of Jane Elizabeth Hughes, Mrs. Nassau Senior by George Frederic Watts, who posed her watering flowers to symbolize her comforting soul (Fig. 3). The enamel-like clarity with which he renders the beautiful sitter—from her rhythmically wavy hair and iridescent blue-purple gown to the splendidly solid transparency of the crystal water jug at her feet—documents Watts’s adoption of the crisp, colorful Pre-Raphaelite manner, a stylistic departure for an artist best known for somber, impasto-textured canvases like Love and Death (c. 1885–1887), now in the Tate collection. 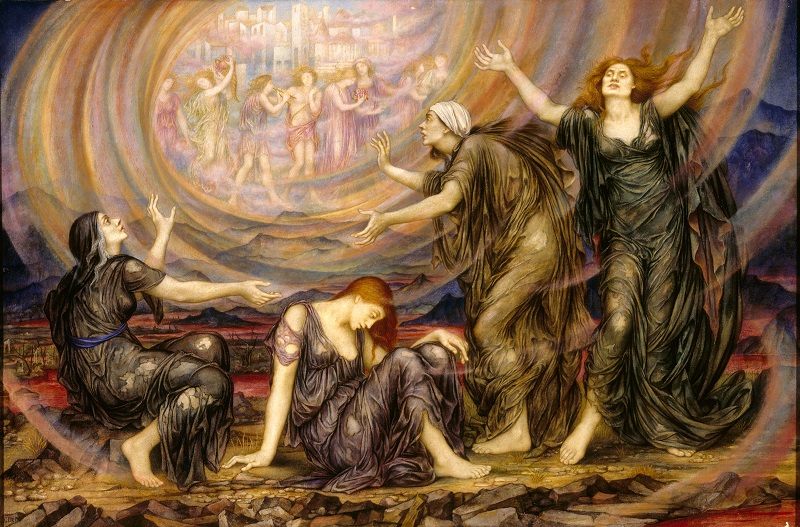 Watts painted Mrs. Senior while at Little Holland House in London, then home, or frequent homing ground, to a noteworthy Bohemian circle including Rossetti and Burne-Jones. In 1864 Watts, forty-six and gravely cerebral, married the enchanting actress Ellen Terry, a week before her seventeenth birthday. Terry, wearing the brown wedding dress designed for her by Holman Hunt, became the subject of his most famous portrait, the richly floral Choosing (1864). Watts and Terry separated within months, although they didn’t divorce until 1877. Meanwhile, Terry returned to the stage and eloped with the architect-designer Edward William Godwin, whose ebonized sideboard at Wightwick reveals his spare, linear style inspired by Japanese design, which anticipated modernism by three decades. And to close the circle of Wightwick’s aesthetic spirit, it was Godwin who decorated the “House Beautiful” of Oscar Wilde in 1884, and who received Wilde’s written encomium that “Each chair is a sonnet in ivory and the table is a masterpiece of pearl.”

So while there’s much to see at Wightwick, there’s a great deal more than meets the eye.

Through December 24, Wightwick is exhibiting Beyond Ophelia—A Celebration of Lizzie Siddal, Artist and Poet, focusing on the art and poetry of the woman who married Dante Gabriel Rossetti and modeled for John Everett Millais’s painting Ophelia.