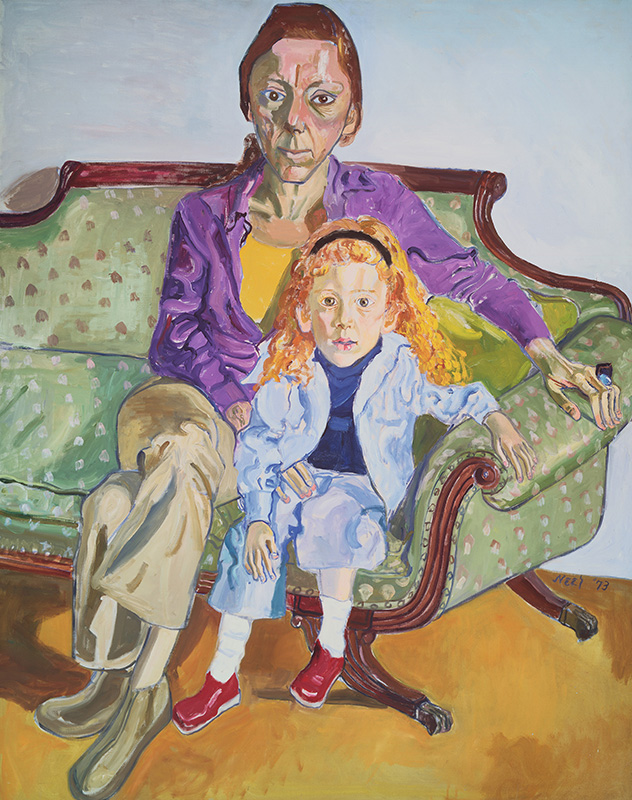 When Alice Neel finally became famous, after half a century of anonymity, indifference, and scorn, she had come to resemble, in both appearance and demeanor, an average Middle-American grandmother. And although she was indeed a grandmother by that point, nothing about her betrayed even the slightest hint of her improbable genius or the chaos that her life had been. Rarely has a spirit been quite as free, to judge from the company she kept: the bohemians and communists, the children and lovers, the misfits and the occasional square, whose comédie humaine is bodied forth in nearly one hundred portraits—together with cityscapes, still-lifes, and ephemera—that make up Alice Neel: People Come First, an epochal retrospective at the Metropolitan Museum of Art. As she once said, “I love to paint people torn to shreds by the rat race in New York.”

Like most New Yorkers, but especially those who most embody the city’s exuberant freedoms, Alice Neel came from somewhere else, from Pennsylvania, where she grew up in a respectably middle-class home. Although she began doing clerical work shortly after high school, she was soon taking art classes at night, and in due course she enrolled in what is now the Moore College of Art and Design. At the time it was a school for women, and Neel would often claim that she chose it for that very reason, because it freed her from the temptations of men. Such forbearance, however, did not impede her taking up with a fellow painter, Carlos Enriquez— the first of a series of Latin lovers—in 1924. One year later they were married and living in Cuba, and by the end of 1926 their first child, Santillana, was born. But this child died of diphtheria before she was a year old, and Neel was scarcely consolable until the birth of her second daughter, Isabella, in 1928. By that time, the couple had moved to New York, where Neel would remain for the rest of her life, even after Enriquez returned to Cuba in 1930, taking their daughter with him.

Neel was so saddened by the death of one daughter, and then by her separation from another, that she twice attempted suicide. A nearly monolithic gray painting of 1930, Futility of Effort, seems to express her despair in the image of a dead child whose head has become trapped between the bars of her bed frame (Fig. 7). It would be some years before Neel evolved into the quintessential artist of motherhood in all of its life-affirming richness: she depicted not only her children (she would eventually give birth to two sons from two other fathers) but also her grandchildren, and, it would seem, every other mother and child she ever encountered. Even expectant mothers were cause for celebration: no other artist had ever placed the condition of pregnancy so squarely at the center of her art. Surely it is works like Pregnant Maria (1964) and Pregnant Woman (Fig. 4)—in which the sitters lie stretched across their beds like parturient odalisques—that did so much to secure Neel’s reputation as a feminist icon.

Despite the sorrows that Neel faced early on and despite her long decades of anonymity, nothing, it seemed, could depress for very long the native buoyancy of her spirit. She entered into and disengaged from a sequence of romantic attachments, because she fell in love easily and because, by her own account, she quite enjoyed it. This liberal attitude inspired a watercolor of 1935 depicting a bathroom in which Neel sits on a toilet while her lover urinates into a sink. From about the same year, a watercolor depicts Neel with another lover, Jos , and draws similar attention to his genitalia.

As one might expect, there was a political side to Neel’s sense of emancipation. She was drawn, as if by some instinctual attraction, to the communists and anarchists, the weirdos and beardos of Greenwich Village, no less than to the poor Blacks and Latinos among whom she spent much of her life in Spanish Harlem. Although this political element is evident in all of her art, it was more explicit early on, especially in the Thirties, when it was allied to activism. In one tenebrous scene of 1936, Nazis Murder Jews, Neel uses bold, schematic strokes to depict an antifascist rally dominated visually by a placard emblazoned with the words of the title (Fig. 8). In later work, however, Neel abandoned such activism as she became more interested in portraying people on the fringes of society, such as in Two Girls, Spanish Harlem (1959) and Georgie Arce No. 2 (Fig. 11), in which the young sitter brandishes a lethal-looking knife.

At the same time, however, Neel could make sympathetic images of “squares” like the Fuller Brush salesman, with his zealous extroversion, his bow tie, and cropped hair. She was able to paint such a picture because her soul was reflexively open to everyone and everything. That openness, that insistence on accepting her sitters on their own terms, on seeing the human constant beneath the variety of racial, social, and economic backgrounds, is the defining element of her portraiture over sixty years. Even an early masterpiece like her portrait of the leftist intellectual Max White, from 1935, possesses a dignified composition and cool perfection of palette, the sense of a living presence rising up before us, that already attests to those powers that would one day make her famous (Fig. 10).

In fact, Alice Neel grew only better with age, reserving her greatest powers for her seventies and eighties. She was in a sense the product of two very different generations. The first was that of the Depression and its aftermath, which endured into the early 1960s, with its slightly somber palette and minor key and the inbred reserve of an earlier age. And then there is what followed, the Age of Aquarius. It is extraordinary how Neel, at seventy, instinctively grasped the formal implications of a movement that enjoined us to trust no one over thirty. As the characters who passed through her studio became ever more uninhibited in their poses and apparel, occasionally slouching off the very chair in which they sat, she discovered formal and chromatic possibilities that accounted for some of her latest and finest effects. Like a great musician, she was forever improvising color and line, and because of her intuitive response to every person she ever met, no two portraits are ever the same. This is certainly true of the many gays and lesbians whom Neel depicted, among them Jackie Curtis and Ritta Redd, the former in all her transvestite finery, with special attention given—as so often in Neel’s portraits—to her large, mannish hands (Fig. 1). It is likewise true of the art historian Linda Nochlin from three years later: her purple jacket and yellow shirt, no less than the violet-colored suit of her four-year-old daughter, clash with the pale green satin of the sofa in which they sit (Fig. 9).

There are, it is true, some false steps in Neel’s art: the pigment in her portrait of a dying man, Randall in Extremis (1960), and the compositional voids in Pregnant Julie and Algis (Fig. 5) fall short of her customary power. But such lapses are the necessary consequence of the improvisational nature of her art: she wanted nothing to do with perfection. As with the poets William Wordsworth and William Carlos Williams, the occasional misstep or lapse into banality is the price that one willingly pays for the beauty and human depth that resulted from the spontaneity of their process.

Although Neel appeared in several group shows over the years, to the abstraction-besotted art establishment of the postwar years she might as well have been an outsider artist or a talented amateur. But then, around 1970, things began to change. As the New York school and all that it implied became flabby and established, figuration began to receive a second look. Meanwhile, the rise of feminism and resistance to the increasingly noxious machismo of the older generation meant that an artist like Alice Neel could finally win a hearing. As subsequent developments in the art world have proved, simply embodying what fashion has decided to take up for a season in no way guarantees that an artist, however lionized, is actually any good. Perhaps by sheerest coincidence, then, Neel not only incarnated what the moment demanded, she was also a great artist by almost any standard one might invoke. And in due course, the world awakened to this fact. Soon she was being asked to paint a cover of Time magazine; the Whitney Museum of American Art filled its entire second floor with a retrospective of her art; and in what was then considered the highest degree of public embrace, Johnny Carson invited her on the Tonight Show. Clips of her appearance can readily be found on the web: in them we see the great octogenarian lady, dressed in a gray sequined gown and brandishing an almost regal walking stick, as she bandies amenities with the host. She seems to be enjoying herself immensely.