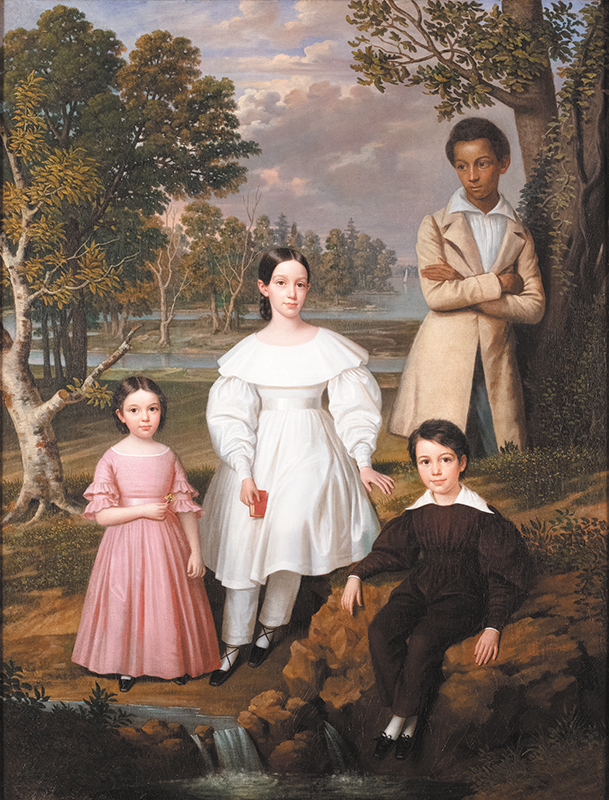 Happy Birthday Bélizaire. It’s been two hundred years since your birth in 1822 and a long time since anyone knew who you were. For a while you were painted out altogether. But we are thrilled that you have reappeared, and that Jeremy K. Simien and Louisiana historian Katy Shannon have recovered your story

That story starts about a decade ago when Simien, a Creole, began to seek out furniture, paintings, and other objects that reflected his family’s long history in Louisiana and came across the painting shown above online. None of the figures were identified, but the setting had been described as a Louisiana landscape. Intrigued, he finally persuaded the owner to sell him the painting and began working with Shannon to figure things out.

Relentless digging revealed that the three white children were Léontine, Elizabeth, and Frederick Jr., the eldest daughters and son of successful New Orleans entrepreneur and financier Frederick Frey, whose three-story home stood on Royal Street in the French Quarter, at what is today approximately the site of the Monteleone Hotel bar. Of greater interest to Simien, however, was the well-dressed and seemingly self-assured Black teenager, who stood just behind the children, and who, in fact, had been painted out of the portrait at some point in its history, then restored in the first decade of this century. (A recent cleaning and conservation has brought him and his personality even more clearly into focus.) Simien and Shannon agree that some sort of mystical connection brought them together and helped them identify the young man as the enslaved Bélizaire, whom the Freys bought when he was six, and ultimately sold more than thirty years later to the owners of Evergreen Plantation, where Shannon is head of history and interpretation. Open for debate is Bélizaire’s exact role in the family, though there is no evidence that he was literally related to the Freys; most likely, he was simply a family favorite who attended the children.

Pending further research, the painting is believed to be the work of the French-born artist Jacques Amans, newly arrived in New Orleans in 1837, about the time the work was done, judging by the children’s ages, and later the city’s premier portraitist. It dates from the height of Frey Sr.’s success—just before things began to go downhill for the family financially and personally. The two girls died soon after the painting was finished, probably of yellow fever, and Frederick Jr. a few years later. Recession hit, and Bélizaire was sold to pay off debts in 1841, though the family subsequently bought him back. Only he and the Freys’ last child, not included in the portrait, lived to adulthood.

In many ways, Simien says, Bélizaire’s story is a metaphor for so much of Black history in this country. The largest figure in the scene, he was subsequently eradicated, only to re-emerge as the most intriguing part of the story. “That’s beautiful,” Simien says.

The painting is on view at the Ogden Museum of Southern Art in New Orleans until October 2.