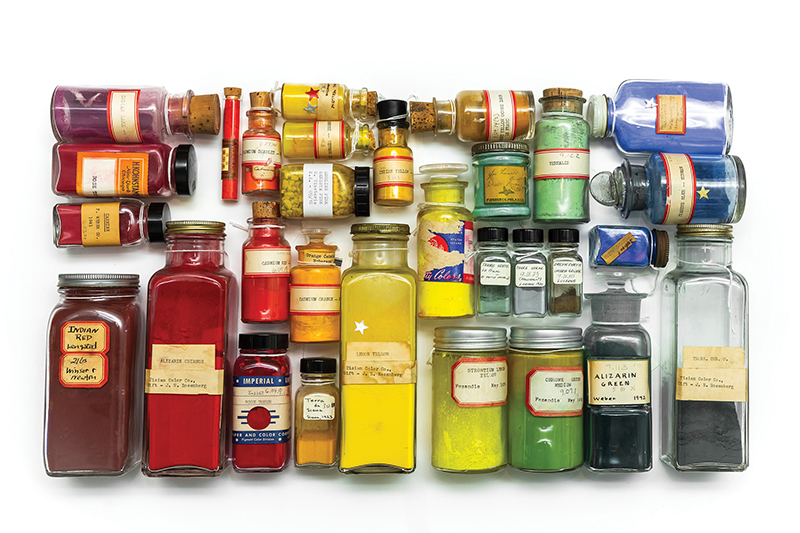 Did you know that the color mauve, or, rather, the pigment, was discovered in 1856 by an eighteen year- old student experimenting with the hydrocarbons in coal tar from street lamps in an attempt to discover a cure for malaria? He failed in that endeavor, but he did find a beautiful purple residue in his flasks. His is just one of the stories—others involve lice, roots, shellfish, bones, and cow urine, to name a few curious sources—told in “A History of Color: An Audio Tour of the Forbes Pigment Collection,” recently launched by the Harvard Art Museums and available at harvardartmuseums.org. Narrated by Narayan Khandekar, senior conservation scientist and director of the Straus Center for Conservation and Technical Studies at Harvard, and conservation coordinator Alison Cariens, the tour offers a fascinating and fun glimpse at some of the more than twenty-five hundred specimens in Harvard’s renowned Forbes Pigment Collection. Alison Cariens tells us more about the tour and the collection.

Ever since the new Harvard Art Museums facility opened in 2014 and the pigment collection was put on public display for the first time—visible behind a long wall of glass— there have been steady requests from visitors to have a closer look. Unfortunately, we are only able to offer limited tours to specific groups for education and research purposes—which led to the idea of recording the stories that make up much of our tours. Director Khandekar and I selected the initial group of twenty-seven pigments to include based on stories we personally find especially intriguing, or have found that visitors often express interest in—our “greatest hits,” if you will. There are plans to add new recordings about other pigments in the future, so I hope visitors will come back and revisit the tour.

Professionals from several different fields have found the collection to be a source of inspiration. Members of our department have, for instance, met with geologists, archaeologists, and digital content developers, as well as several designers of apparel, furniture, and decor. An excellent example of this last is a collaborative project conducted with designer Jonathan Olivares and textile developer Kvadrat, in which fabrics based on the pigment collection grew out of a project to contribute a piece of furniture to Philip Johnson’s 1942 Thesis House in Cambridge, Massachusetts.

Historic preservationists and furniture conservators also certainly use pigment analysis and standards in their work, and I am sure there is a setting where it would be of use to wallpaper designers and restorers as well. We do know that the arsenic-based pigment Scheele’s Green, popular in the early nineteenth century, was used in wallpaper; it has been said that it may have been a source of maladies at the time in Britain, as the moist air would cause the pigment to degrade slightly and release arsine gas into the air of homes.

Personally, I think the most fascinating element of the Forbes Pigment Collection is how it illuminates the essential role of color and art in the human experience. Despite fighting for their very survival, people have journeyed great distances and conducted extensive experiments to find and create color with which to surround themselves. This collection is a testament that color, beauty, and art are not frivolous endeavors, but rather a vital component of the human experience.