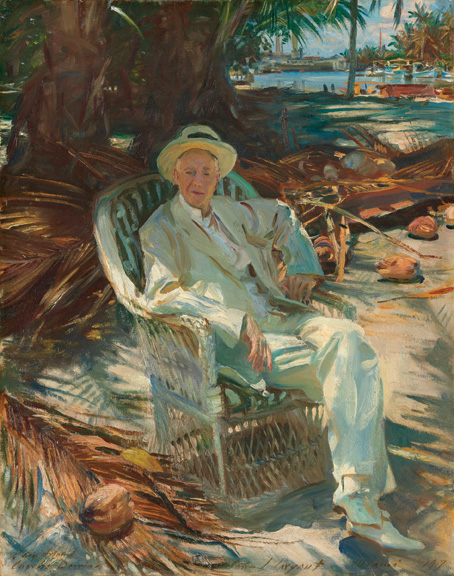 “Scintillating…addictive” applauded The Guardian; “outstanding…one of the best I’ve ever seen,” acclaimed The Telegraph; “mesmerising” said The Spectator. All were describing the exhibition Sargent: Portraits of Artists and Friends at London’s National Portrait Gallery earlier this year. But for anyone in New York this summer, it gets even better. An expanded version of the show of John Singer Sargent’s portraits of the influential and colorful characters from the worlds of art, literature, music, and theater who were his friends—Claude Monet, Auguste Rodin, Robert Louis Stevenson, Henry James, and Ellen Terry, to name a few—is on view at the Metropolitan Museum of Art until October 4. We asked Elizabeth Kornhauser, Alice Pratt Brown Curator of American Paintings and Sculpture, and Stephanie Herdrich, assistant research curator, who organized the installation here, to tell us about some of their favorite works that will be seen only in New York.

“The exhibition is arranged chronologically by the locales where Sargent painted,” Kornhauser says, “so it seemed logical to expand the American section for our audience.” One coup is the portrait of the artist’s patron and close friend Isabella Stewart Gardner, which rarely leaves its Boston home. Other important additions are a pastel of artist Paul César Helleu, a lifelong friend from Sargent’s student days in Paris, and a portrait of Charles Deering, whom Sargent met on his first trip to the United States in 1876. An art collector, Deering owned Sargent’s ravishing portrait of Mrs. Hugh Hammersley, one of three works in the Met’s own collection that are also augmenting the exhibition here. The others are William Merritt Chase and Madame X (Madame Pierre Gautreau), the latter to be hung in intriguing dialogue with Dr. Pozzi at Home, the sensuous likeness of the famous Parisian gynecologist with whom she, and many others, are said to have been romantically entwined.

Gardner admired Madame X and conspired with Sargent to create a similarly progressive portrait of herself. “Sargent’s presentation startled conservative Boston,” Herdrich says. “Contemporary viewers were mystified by her illusive expression and the brocade background, which made her look like a haloed-icon. One well-known anecdote relates that when Gardner’s husband first saw the portrait, he reportedly declared, ‘It looks like Hell, but it looks like you!’” It will be hung in New York in the context of Sargent’s other Boston friends—though, as Kornhauser points out, Gardner was “born and raised in the genteel society of the New York of Edith Wharton and Henry James.”

In contrast to the relative formality of the portrait of Gardner is Sargent’s likeness of Deering, painted in Florida in 1917. “It’s an oil painting that looks like a watercolor,” Herdrich says, “a dazzling example of how Sargent used oil paint and watercolor almost interchangeably. He is playing on all his strengths—it’s a tender portrait of a longtime friend in a brilliantly sunlit and exotic landscape.”

Equally interesting in terms of technique, the rendering of Paul Helleu is one of Sargent’s few works in pastel, a medium Helleu favored and may have encouraged Sargent to try. The “creaminess” suited his fluid technique,” Herdrich observes. Sargent made many studies of Helleu, “but this is one of the most sensuous and immediate and represents Sargent at his most candid and experimental.”