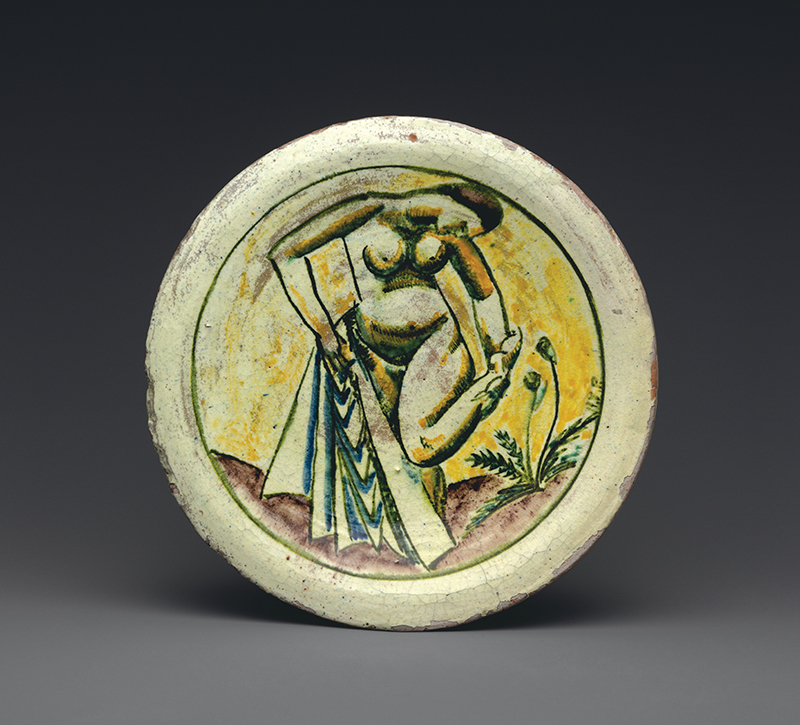 The title says it all: Gifts from the Fire: American Ceramics from the Collection of Martin Eidelberg. On view at the Metropolitan Museum of Art until October 30, this exhibition showcases exceptional examples of American ceramics given to the Met over the years by renowned collector and scholar Martin Eidelberg. Below, the Met’s Alice Cooney Frelinghuysen, curator of the show and coauthor with Eidelberg of the accompanying catalogue, talks with the collector.

Alice Cooney Frelinghuysen: How did you become interested in ceramics and what ultimately led you to forming such an important collection of late nineteenth and early twentieth-century examples?

Martin Eidelberg: There were two principal factors. As a teenager I learned about clay and glazes, and greatly enjoyed the experience of throwing and building vases. In addition, two turn-ofthe- century iridescent glass vases owned by my grandmother were key to fostering my love for the art nouveau period. But it was when I started to earn a salary that my collecting really began.

ACF: I have called you a “scholar-collector,” and you have certainly been an avid researcher and a prolific writer on ceramics of the period. But when you started collecting in the 1960s, there were precious few publications you could turn to. Has your scholarly work informed your collection and vice versa?

ME: When I began collecting, the majority of collectors were hobbyists often favoring “popular” local ceramics. At first I had planned on creating an encyclopedic, A-to-Z assemblage, but I realized I didn’t like the work from some of the Zanesville potteries. It was discovering the many period periodicals that helped me formulate a more focused approach to collecting.

ACF: You were clearly drawn to ceramics that were handcrafted and to ceramists whose technical skill and artistic taste set them above all the others. Your strength in the work of Adelaide Alsop Robineau exemplifes that.

ME: In my view, Robineau was America’s greatest ceramist. I am particularly fond of her jewel-like crystalline glazes, her meticulous carving and technical virtuosity, and her genius of design.

ACF: What are some of your sources? Is there a work that stands out as a particularly interesting story in its acquisition?

ME: I went to well-established antiques shows, rural fairs, leading dealers in the field, thrift shops, and, especially in recent years, auctions. You never know where you will find something. On one spring-break trip to Ohio, I stopped in an antiques shop in Zanesville and was surprised to find a beautiful Van Briggle vase with a copper mount set with seed pearls; amazingly, it was modestly priced. The dealer said she had just bought it in St. Louis, which intrigued me because I was aware that such vases had been created especially for the 1904 World’s Fair in St. Louis. But one never knows where wonderful things will be found. Early on when I looked for Grueby in Boston, they thought I was looking for “groovy” pots. Some of my best Grueby vases were bought in Paris because in 1900 the Parisian gallerist Siegfried Bing represented Grueby, as well as Rookwood and Tiffany.

ACF: Another great strength of yours is the work of Louis C. Tiffany. In addition, you made extraordinary discoveries about Tiffany’s pottery, in particular identifying the critical role women played in it.

ME: Sometimes my scholarly research and my collecting merged in unexpected ways. My interest in Tiffany led me to interview Julia Munson Sherman, then in her nineties; she had been in charge of Tiffany Studios’ enamels department. She, in turn, offered extremely valuable hints that ultimately led me to uncover the history of Tiffany’s ceramics and the women behind them. And all the while I was able to build up a collection of wonderful examples.

ACF: The majority of your collection dates to about 1890 to 1915. However, there are some exciting examples from the period between the wars— some by émigré ceramists, others that exhibit a strong affinity for contemporary European art movements. How did this come about?

ME: It was really a natural extension of my collecting, and in fact a natural extension of my research. When I participated in an exhibition on the Cranbrook Academy of Art I immersed myself in the ceramics world after World War I and found it to be a period of great artistic energy and creative expression. I discovered ceramists like Henry Varnum Poor, Hunt Diederich, and Maija Grotell, and gradually another pantheon of artists was revealed. The more I studied, the more I collected. And the more I collected, the more I studied.