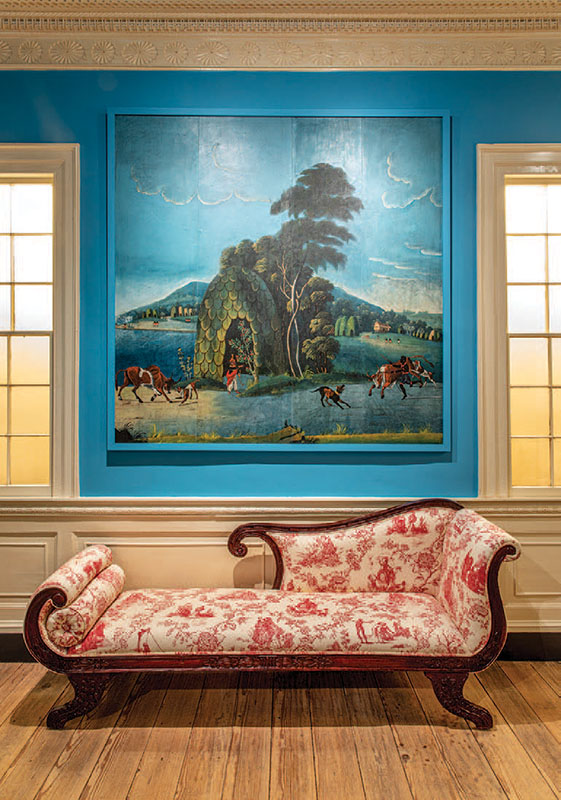 There’s a party going on at the Museum of Early Southern Decorative Arts—in the early nineteenth-century dining room from White Hall plantation in Berkeley County, South Carolina. The guests, period and contemporary artists, were asked to “BYOB”—by which the hosts, guest curator Michael J. Bramwell and MESDA’s Daniel K. Ackermann, meant “Bring your own bags that tell your story.” In the nineteenth century many of these guests, most of them Black, wouldn’t have been invited into this room, except perhaps to serve; but their “bags” all have something to say about the material legacy of slavery.

The installation is “what social justice work looks like in a cultural space, at least as I think about it,” says Bramwell, an artist, educator, and scholar who is just completing his PhD in American studies at the University of North Carolina at Chapel Hill and was the primary party planner. In 2020 he was invited to spend six months as a visiting curator at MESDA and Old Salem, tasked with casting a fresh eye on the collections and their traditional presentation. One result was the realization that the museum’s accession records (and thus much of the presentation) failed to reflect the contributions of the enslaved to the material culture of the plantation South. Historic records related to White Hall, for example, name Black woodworking craftsmen Sharloe, Jemmy, Jupiter, Jacky, Cyrus, and Dick, some—or all—of whom probably executed the carved woodwork of the dining room, but until very recently none has been given credit for it. White silversmith Alexander Petrie, from Charleston, by contrast, has long been well documented in the annals of the decorative arts. At the party, a salver by Petrie—or was it by a Black silversmith he enslaved named Abraham—holds a sculpture by artist David Hammons, who once commented that “outrageously magical things happen when you mess around with a symbol.” On the salver his Untitled —a chunk of elephant dung, partially painted in silver and wrapped in heavy iron chains (as difficult to forge, perhaps, as the salver)—upends not only the plantation notion of who served whom, but also of what exactly was served?

The issue of leisure time on the plantation comes into focus with an elegant nineteenth- century chaise longue. But who could find rest on this chaise upholstered in Renée Green’s 1992 Mise-en-Scene: Commemorative Toile with its gruesome scenes of enslavement in French colonies and antebellum America? Reflecting on Green’s aim that her work “help people think about themselves in relation to different histories and alternative ways of seeing,” what might one further think when sitting on the chaise and gazing at the room’s panels of mid-nineteenthcentury hand-painted wallpaper depicting exotic scenes of interactions between African natives, figures in Ottoman dress, white shipwreck victims, and red-coated hunters? Attributed to an artist known only as “Van Patton,” the paper is now hung in the White Hall dining room, although it was originally made for a plantation in Georgia.

Who else is at the party? Theaster Gates is there, as are Kara Walker and Lonnie Holley, among others. Enslaved potter David Drake (the subject of Bramwell’s dissertation) is there, too, along with free Black potter David Jarbour, both of whom are sure to find common ground with contemporary potters Michelle Erickson and Todd Johnson. This last has said, “I want my art to be a ‘thinking thing,’” which just might be a perfect tagline for the party, which keeps on going until July 16. Join it if you can. You’ll meet a lot of interesting people.