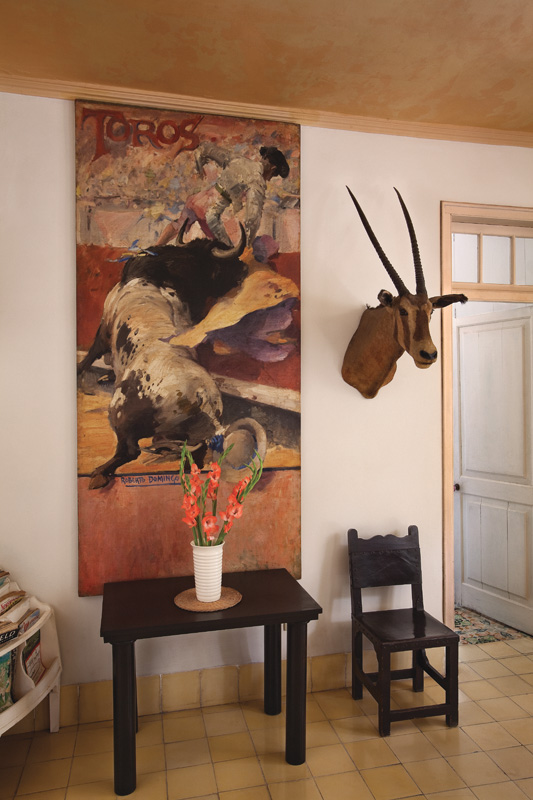 In the last third of his life, Ernest Hemingway called Cuba home. He resided there for more than twenty years, longer than he lived anywhere else in the world. “My not living in the United States does not mean any separation from the tongue or even the country,” Hemingway told Robert Manning when the writer visited him in Cuba in 1954. “I live in Cuba because I love Cuba—that does not mean a dislike for anyplace else. And because here I get privacy when I write.”1

His home in Cuba was Lookout Farm—or, in Spanish, Finca Vigía—a fifteen-acre estate on the outskirts of Havana. Largely because of political tensions between Cuba and the United States over the past six decades, Hemingway’s home has received relatively little attention. Yet Cuba still loves the writer and has kept the house and its modestly traditional-yet-stylish furnishings intact and well-maintained. It’s a time capsule of a bygone era; a place that sheds light on the tastes, life history, and character of perhaps the best-read writer of the twentieth century, Finca Vigía is an under-known and under-visited repository of a great literary legacy.

Hemingway first visited Cuba in 1928 while in transit from France to Key West aboard the ocean liner Orita. Although he stopped in Havana for only a short time on that journey, it was long enough to spark his curiosity about the island and its people. During the early 1930s he began to make regular trips to the island from Key West, where he lived, and spent time deep-sea fishing in Cuban waters.

He took up full-time residence in Cuba in 1940, following a path dictated by his tortuous love life. Four years earlier, while still married to his second wife, Pauline Pfeiffer, he met the young journalist Martha Gellhorn in the Key West bar Sloppy Joe’s and they later began an affair. In the spring of 1939, Gellhorn and Hemingway were living together in a Havana hotel when she saw a newspaper advertisement offering Finca Vigíafor rent at $100 a month. Gellhorn—unhappy with the hotel’s small quarters and Hemingway’s freewheeling Havana lifestyle (though he, perhaps, was not)—convinced the novelist to take on the lease.

By the following November, Hemingway and Pfeiffer were finally divorced, and the next month he married Gellhorn. As a combination Christmas present and wedding gift, he bought Finca Vigíafor $18,500 from its French owner, Roger Joseph D’Orn Duchamp. He purchased the estate with the proceeds from the sale of the cinema rights to For Whom the Bell Tolls—a reported $150,000, a record amount at the time. He would make the country house his primary residence until his death by suicide in 1961 in Ketchum, Idaho.

Finca Vigíawas purportedly named after a colonial watchtower that stood in the vicinity. The house was built in 1887 by Catalan architect Miguel Pascual y Baguer in San Francisco de Paula, a village approximately ten miles southeast of Cuba’s capital. It is essentially a country farmhouse designed in the Spanish colonial style with high ceilings, tiled floors, and an enormous living room area.

Gellhorn used her own funds for essential repairs and restorations when she and Hemingway took ownership. She hired a local painter to whitewash the walls and a carpenter named Francisco Castro to design and build simple furniture. Castro stayed on as the resident handyman. “It is a good place to work because it is out of town and on a hill so that it is cool at night,” Hemingway wrote in a 1952 letter to syndicated newspaper columnist Earl Wilson. “I wake up when the sun rises and go to work, when I finish I get a swim and have a drink and read the New York and Miami papers.”2

The decor of the house today mainly reflects the tastes of Hemingway’s fourth and last wife, Mary Welsh. Between professional rivalry and Hemingway’s resentment of Gellhorn’s long absences during reporting assignments, their stormy marriage ended in divorce in 1945. Hemingway met Welsh, a journalist and war correspondent, in London in May 1944. They soon became intimate and eventually married in Cuba two years later, in March of 1946.

Finca Vigía’sinterior is almost precisely the way Hemingway left it sixty  years ago, thinking he would surely return. The most immediately striking features of the living area are the mounted heads of such exotic species as kudu, oryx, antelope, gazelle, and a Cape buffalo—trophies from Hemingway’s African hunting safaris. (The English novelist Graham Greene is said to have remarked that he didn’t “know how a writer could write surrounded by so many dead animal heads.”3) Perceptive visitors would have been drawn to something more exciting: Hemingway’s collection of artworks, composed of more than fifty paintings.

Not long after he arrived in Paris as a newspaper correspondent in 1921, Hemingway met Gertrude Stein. She helped him develop his nascent interest in art, lectured him on how to purchase it, and cultivated his appreciation for abstract works. At Stein’s salon he would befriend artists such as Pablo Picasso, Joan Miró, and Juan Gris. Works of theirs that he bought over the years would find their way to Cuba.

After Hemingway died and Welsh left the house near Havana for good, she had the most significant paintings shipped away. But Cuban curators, to maintain the illusion of the past ambience, have had reproductions made. These include a copy of Gris’s cubist The Bullfighter, which hangs in the living area in place of the original that Hemingway acquired in 1931. He used it as the frontispiece for his book Death in the Afternoon,published in 1932. Hemingway was famously an aficionado of bullfighting, and many of the original paintings left in Cuba depict that subject. Most are by Roberto Domingo, a Spanish-born artist who lived in Paris and made his name painting bullfighting scenes. Domingo’s painting Toros hangs at one end of the living room (see Fig. 8). Painted for a poster advertising the 1932 bullfights in Valencia, Hemingway used it as the cover image for Death in the Afternoon.

Most rooms in the house connect to the living area. At its east end and down a short hallway is the master bedroom, which today is never open to the public. Welsh reminisced in her biography, How It Was, that when she first landed in Cuba and arrived at the Fincain May 1945, “Ernest opened the door to a big blue room filled with sunshine, an immense bed, an immense desk, an immense chest of drawers and a large dressing table.”4

A reproduction of the 1922 oil painting The Throw of the Dice by André Masson—Hemingway purchased the original in 1922—hangs in the room, as does a copy of Portrait of Ernest Hemingway (Kid Balzac) by his friend, artist and illustrator Waldo Peirce (see Fig. 6). Hemingway met Peirce in Paris in the spring of 1927 and Peirce began the portrait in Key West in 1929 and completed it in his Bangor, Maine, studio. The inscription at the lower right corner of the painting reads, “for Ernest (alias Kid Balzac) Key West first April/29 WP.” Hemingway is portrayed with long hair and a drooping moustache, imitating a famous image of the nineteenth-century French writer Honoré de Balzac, founder of the realist school of fiction and much admired by Hemingway.

Opposite the master bedroom off the living area is the workroom where Hemingway wrote. Hemingway typed standing up, and his Royal Arrow typewriter sits atop a Webster’s Universal Dictionary on the bookcase, where he stood while he finished For Whom the Bell Tolls and wrote The Old Man and the Sea, A Moveable Feast, and other books, along with thousands of letters. Above the daybed is a reproduction of Gris’s Man with a Guitar, painted in 1926, which Hemingway acquired in 1931.

The entrance to the library is on the living area’s north side. Displayed just inside is a ceramic plate with an incised drawing of a bull’s head by Picasso that Welsh purchased in Paris in 1957 for the equivalent of $150. (Picasso and Hemingway remained friends from the days of the Stein salon. The artist made twenty-eight drawings for the 1959 German translation of Hemingway’s story “The Undefeated,” about an old wounded matador attempting a comeback.) The 1933 oil painting Town Scene hanging on the adjacent wall is by the Venezuelan artist Luis Alfredo López Méndez, who lived in Cuba for a time; it is inscribed and dedicated to Ernest and Pauline Hemingway.

Above the white chest of drawers sits a painting by the Dutch artist Raoul Hynckes, with an inscription that reads: “La Poule et le Fer à Cheval [The Hen and the Horseshoe] A Monsieur Ernest Hemingway, avec ma trés grande admiration.” And over the bookcase is a framed photograph of the Pilar, Hemingway’s cherished fishing motor cruiser, which has been restored and is today displayed on what once was the Finca’s tennis court. The enormous table is crafted of majagua wood, an exotic hardwood in the Hibiscus family that is indigenous to Cuba and Jamaica and known for its figured grain.

The dining room is the only room in the house that does not have bookshelves or magazine stands. In it hangs a reproduction of probably the most famous artwork in Hemingway’s collection: Joan Miró’s La ferme (The Farm), painted in 1921–1922. Hemingway described La ferme by saying, “It has in it all that you feel about Spain when you are there and all that you feel when you are away and cannot go there. No one else has been able to paint these two very opposing things.”5 The majordomo of the Finca, René Villarreal, said that Hemingway once told him The Farm was his favorite painting in the collection and that, “If there’s ever a fire at the Finca, grab The Farm and Man with a Guitar.”6 Miró considered La ferme his first great work and it is now in the collection of the National Gallery of Art in Washington, DC.

Not far from the house stands afour-story tower that Welsh designed and had built in 1947 as a special gift for Hemingway’s birthday. She hoped that he would find it a pleasant place to write, away from the distractions of the household and the outside world. Perhaps the peace and privacy provided by the tower’s top floor proved to be the greater distraction. Hemingway seldom used the space to work. He said he “missed the sounds of the house.”7

At Finca Vigía, to live comfortably and unpretentiously was always the goal. For all the great art it contains—even in reproduction—the house’s legacy is literary rather than aesthetic. Finca Vigíais the only living Ernest Hemingway museum in the world, and its collection has acted as a conduit for cooperation, respectful discourse, and friendship between Cubans and Americans over the years. Above all, the house museum succeeds in its mission of preserving the memory and spirit of its owner. There, you still feel the presence of the great writer.