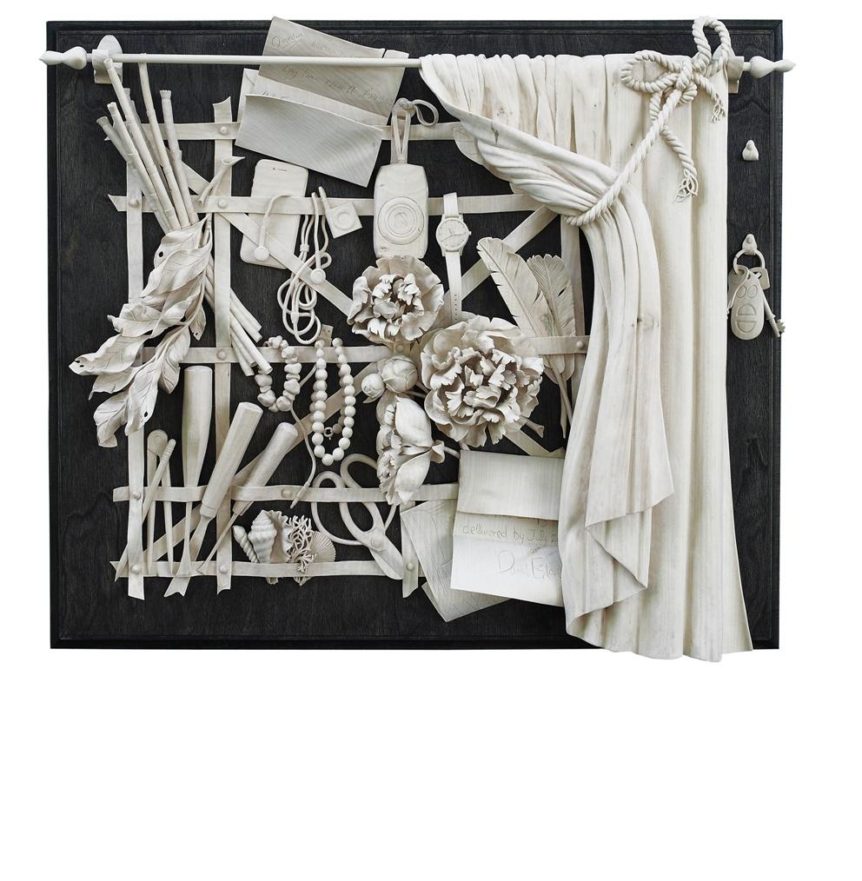 National Gallery, London, February 2000. Time to kill before a memorial service at a church on the Strand. A sign pointed toward an exhibition of the trompe l’oeil “letter racks” (whatever they were) by the seventeenth-centu­ry painter Cornelius Gijsbrechts (whoever he was). Why not? I walked into the show expecting to be amused by painted illusions. I walked out entranced by the letter-rack form itself, with its apparently random selection of personal objects nonchalantly stuffed in an austere matrix of straps.

Seventeenth-century letter-rack paintings, with their free-and-easy inclusiveness, came to be called quodlibets (Latin for “whatever you please”). This carte blanche quality is part of their charm. But there seemed to be a philosophic resonance in the tension between those fleeting particularities, shored up against loss, and a Mondrian-like grid that suggests the fundamentals of existence–birth and death, body and mind, pleasure and pain. Behind jail-like bars, little per­sonal freedoms. Or so I mused, walking back out into Trafalgar Square.

Moreover, the first sight of these paintings lit up my carver’s radar. What would it be like to turn a letter rack into a three-dimensional sculp­ture? Most of my previous work had been based on high relief flowers and fruits and foliage. There was something enticing about a shallower composi­tion, focused on human artifacts, the success of which would depend on what the Renaissance called disegno. And beckoning like Sirens’ songs were the technical challenges that were sure to be encountered.

More than a decade went by before I found a patron adventurous enough to finance an expedition into this undiscovered territory. In the intervening years I made it my business to find out all I could about the devices I’d seen that day. Before e-mail folders, before refrigerator magnets, before pinboards (pat­ented in 1924), there were letter racks. For centuries, until new contrivances pushed them aside, these were the workaday repositories for correspondence and other papers. In more recent times just about the only place you might see one would be above the desk in a fusty club or starchy hotel, its crossed straps stuffed with mail and notices and lost-and-found objects. But the whirligig of fashion continues to revolve. Attracted by their utility and visual charm, Martha Stewart and other lifestyle pundits have promoted the use of letter racks in homes and home offices.

Depictions of letter racks in paintings go back at least as far as Niccolò Antonio Colantonio’s mid-fifteenth-century portrait of Saint Jerome in his study (Fig. 3). In both a woodcut and an engraving Albrecht Dürer also gestures towards Jerome’s iden­tity as a writer by fitting out the scholar-saint’s cell with a letter rack or two. That they were standard equipment in the Renaissance studiolo is suggested by an illusionistic letter rack painted by Vittore Carpaccio in the 1490s, on what seems to have been the inward side of a hinged door. (Curiously, ac­tual letter racks survive in exactly this position on the doors of a small writing cabinet made in Wil­liamsburg, Virginia, in the eighteenth century.)

The rudimentary racks of the fifteenth and sixteenth centuries hold papers and perhaps a quill, pen knife, or scissors, but little else. Writing materials simi­larly make up the content of the first “modern” letter-rack painting, by the Dutch artist Wallerant Vaillant in 1658 (Fig. 4). Here for the first time a letter rack is elevated into the subject of an inde­pendent painting, and trompe-l’oeil illusionism is made the reigning principle of the genre.

A few years later the most technically skilled of the seventeenth-century letter-rack paint­ers, Samuel van Hoogstraten, extended the rack’s vocabulary to include glowingly painted strings of pearls, keys, magnifying glasses, medal­lions, ribbons, sealing wax, lockets, eyeglasses, and printed pamphlets and books, among other things (Fig. 9). What might have been a tabletop still life agglomeration has been tipped to vertical, to the same plane as a picture, and given strong vanitas or memento mori undertones. The golden age of letter-rack painting had dawned.

Van Hoogstraten’s three-strap form was adopted by the Scottish-Dutch painter Edwaert Collier, whose most obsessively repeated subject is the new print world of newspapers and pamphlets that flooded London after the ending of the Licensing Act in 1695 (see Fig. 10). Revealed by Drohr Wahrman’s recent book Mr. Collier’s Letter Racks: A Tale of Art and Illusion at the Threshold of the Modern Information Age (2012) as an extraordinary intel­lectual trickster who delighted in hidden signatures and playfully ambiguous printed text, Collier appears to have produced more than one hundred letter-rack paintings, many nearly identical and some in half-acknowledged collaboration with other artists.

The high-water mark of the genre, in size and in variety of content, is reached in the paintings of Cornelius Norbertus Gijsbrechts. His letter racks, revealed by a drawn-back curtain, are a teeming universe of cameo portraits and engrav­ings and drawings (pictures within a picture), writing materials, brushes, seals, booklets, pock­et watches, toilette sets in their own cloth bags, royal proclamations, pistols, hourglasses, musical instruments, purses with drawstrings, hunting horns, grisly surgeon’s tools, and ephemera of various sorts (see Fig. 2).

In the eighteenth and early nineteenth centuries the production of letter-rack paintings dwindled, only to be revived again by two notable American artists, William M. Harnett and John Frederick Peto. Harnett returned to a simple vocabulary of letters and envelopes and calling cards, depicted with stunning verisimilitude (see Fig. 6). Although he produced only two letter-rack paintings, both are masterpieces of the form. The melancholic Peto offers up a tattered world of dangling straps, half-finished cameo portraits, and disintegrating remnants of tickets and newspaper clippings (Figs. 7, 8).

When at last a commission allowed me to try my hand at the letter-rack form, I turned to Gijsbrechts for inspiration, with his dramatic curtain and his chockablock content. I’d pretend this rack was hanging in the corner of my carving room, and choose the objects accordingly (Fig. 1). Remembering Ezra Pound’s advice–“make it new”–I decided to bring the genre up to date by including my iPhone and iPod Shuffle and my digital camera. Delusive! Within weeks of my finishing the piece, Apple had replaced the iPhone 4 with the iPhone 5. The digital camera soon began to look clunky, too. As for the iPod Shuffle, does anyone buy these things now? The up-to-date gadgets in this letter rack are becom­ing as archaic as Gijsbrechts’s sealing wax and royal proclamations.

There’s something wonderful about this. Trying to bring it up to date, I’d dated it. I’d made my sculpture of the moment, all right, even including a contract with my patron and an overdue bill from a limewood merchant. But mooring it in the pres­ent only guaranteed that it would end up moored in the past. Which is exactly where it should be. Letter racks are about impermanence, and the fleeting quality of the saved objects is what sends that poignant message.

I decided to plunge into the pleasing gloom of this vanitas strain by using John Peto’s somber letter racks as my next model, broken straps and all. This composition is smaller and its content sparser, with a decidedly melancholy feel to some of its objects (Fig. 5). The elements were chosen without any thought of an underlying narrative. But it’s almost impossible to be entirely random in your choices, and as I carved it a ghostly figure began to emerge from these secretive fragments. A letter rack is a portrait by surrogates, by possessions. Its owner, the subject, may be real or imaginary, or more likely, dwell in the half light between real and imaginary.

From the start it was clear that my pale me­dium, limewood (the British term for linden wood), was having an effect on the feel of these sculptures. You’d think that bringing full dimensionality to a painted letter rack might enhance its trompe-l’oeil quality. But literal reproduction is strangled at birth by the monochrome wood, to which I never add color or indeed finish of any sort. So the illusionism is of a more sophisticated kind, based on formal resemblance only. Drain the color out of a thing and it turns ghostly and universal. A viewer can take it for reality only by inhabiting an imaginative part of the brain.

For my third letter rack (Fig. 11) I decided to take up the van Hoogstraten and Collier version, with its cleanly simple form of three horizontal straps. The printed newspapers and pamphlets they embraced so enthusiastically are beyond the reach of plausible reproduction in uncolored woodcarving, though I did include a journal and a battered paperback. There’s also a postcard addressed to me in the owner’s hand. The card’s message is concealed under the journal, but I imagine it complains politely about the sculpture being months overdue. The technical difficulties I once heard the Sirens sing of were not fanciful. Letter racks must have taken a long time to paint, but to carve them? Longer, let’s just say.

DAVID ESTERLY‘s carving takes its inspiration from the seventeenth-century English wood carver Grinling Gibbons. Es­terly was the curator of the 1998 Gibbons exhibition at the Victoria and Albert Museum and is the author of The Lost Carving: A Journey to the Heart of Making (Viking 2012).