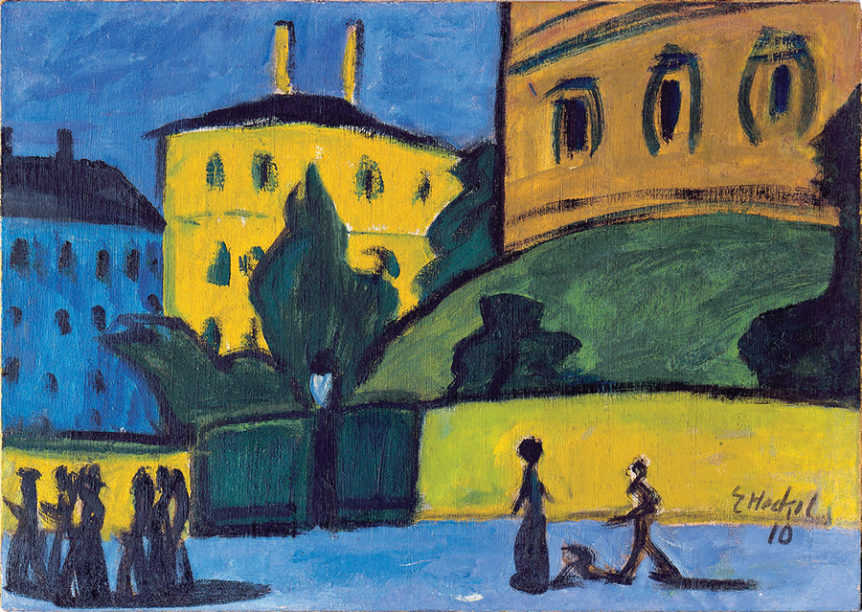 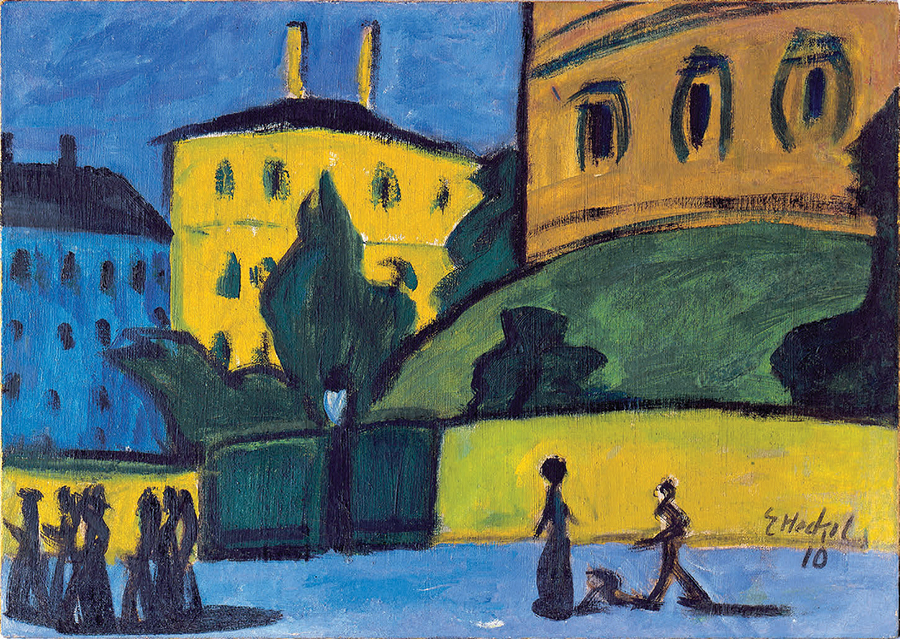 Dresden Suburb by Erich Heckel, 1910. Chemnitz Gemälde Galerie; except as noted, all images courtesy of the Victoria and Albert Museum, London.

By 1874, when the French impressionist Eva Gonzalès painted her sister and husband-to-be in Une loge aux Italiens (A Box at the Theatre des Italiens), opera had achieved iconic status in Europe, and the theater box, positioned partway between public and intimate space, between art and life, was recognized as a location for listening and daydreaming—as well as for seeing and being seen. The magnificently nuanced painting is a highlight of the Victoria and Albert Museum’s exhibition Opera: Passion, Power and Politics, a show that tells the story of the art form from seventeenth-century Venice, when opera was first performed in public spaces, to the present day by focusing on seven premieres in seven cities that contextualize opera’s history.

The curators have filled the space with art, maps, instruments, costumes, and musical scores, as well as objects that might once have been in the hands of members of the audience. A resplendent bronze ewer with a sinuous dragon handle, for instance, suggests the luxurious lifestyle of Venice’s first opera patrons. 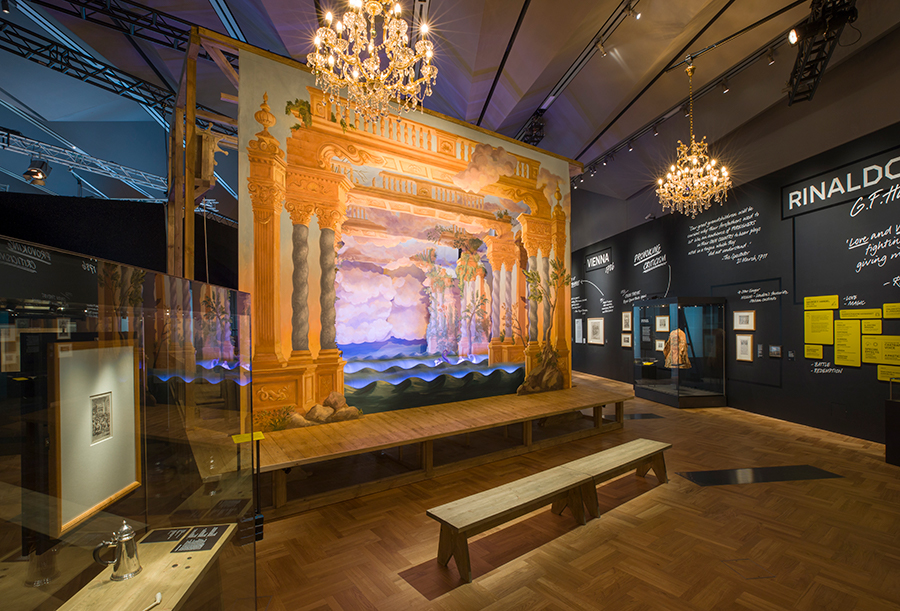 The exhibition features a model of a box stage reconstructed from the original directions written for the “Chorus of the Mermaids” in the beginning of Act II in Handel’s Rinaldo (1711).

Ticketholders are provided with headsets synchronized to switch tracks as they move from zone to zone. Facing the tin costume crown with lozenge-shaped colored glass stones designed by Alfred Albert for the 1861 Paris premiere of Tannhäuser, you hear the music from the ballet scene. Approaching Erich Heckel’s ghostlike painting, Dresden Suburb, in which the city’s architectural structures are interpreted in a patchwork of exotically contrasting yellows and blues outlined in confident black lines, you hear a portion of Richard Strauss’s “Dance of the Seven Veils” from Salome, first produced in 1905. 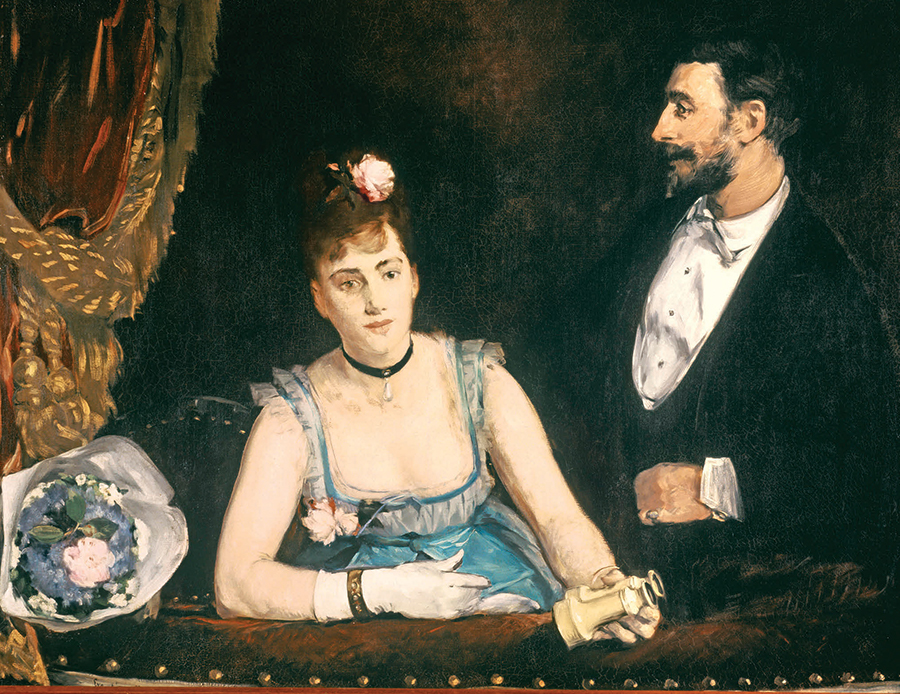 The most ingenious segment of the exhibition is the model of a box stage with machinery and ornate trompe-l’oeil baroque sets, reconstructed from the original directions written for the “Chorus of the Mermaids” in the beginning of Act II in Handel’s Rinaldo (1711). With the open framework at the sides, you can see the winch system and rollers at work, causing waves to churn, a sailing ship to glide along, mermaids to swim, and clouds to rise and break apart.

Politbureau ZKVKP (B) [Central Committee of the All Russian Communist Party (Bolshevik)] by Gustav Klutsis, 1935. © Victoria and Albert Museum.

When you get to Shostakovich’s Lady Macbeth of Mtsensk, which premiered in 1934 and was condemned in 1936, you will find a small collection of biographical material, including handwritten, coffee-stained pages of a 1931 draft of the score with notes and cross-outs. Menacing Soviet movie footage is beamed on the walls above Stalin-era posters and artifacts. Gustav Klutsis’s well-known photomontage of the Politburo, in which executed member Jānis Rudzutaks is crudely blacked out, resonates against the haunted lyricism of the opera produced under nightmarish circumstances—far from anything that could have been imagined only sixty years earlier in the opera box at the Theatre des Italiens.