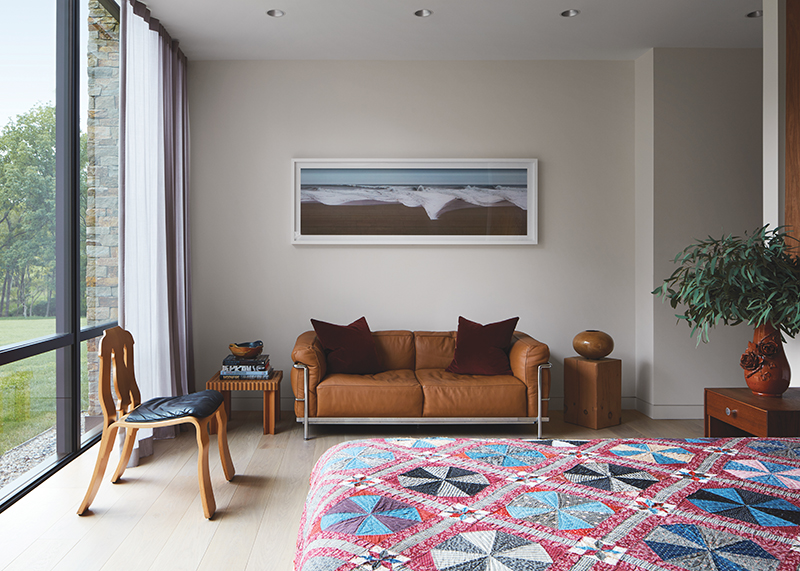 “I blame his mother for the candlesticks,” she says, indicating her husband. “She said she wanted her son to have them, which I thought was sweet. But there turned out to be hundreds of them!”

She’s kidding, of course. And besides: the bequeathed collection of colonial candlesticks arrived well after the couple—who prefer to remain anonymous—had put together several collections of their own. In their sleek, stone-and-window-walled house in Bucks County, Pennsylvania, designed by the New York firm Architecture Research Office (ARO), you will find antique weathervanes, souvenir ruby “flash” glass, pine cone–motif Roseville pottery, American quilts, hammered-metal sporting trophies and presentation pieces (many with horn or antler handles), and Teco pottery alongside classic mid-century furniture.

And that’s just the current line-up. The wife formerly amassed cordial glasses—“shelves and shelves of them,” she recalls—which were eventually given to their daughter. The wife also winnowed her assemblage of covered butter dishes in recent years. And their old flag collection was also “deaccessioned,” after a fashion, to a daughter in Denver.

The two are constantly poking fun at each other’s collecting impulses. “If one or two things are good, multiple examples are better,” concedes the husband by way of explaining his rationale. To which his wife responds, “I call it hoarding; he calls it collecting.” Peals of laughter follow.

The motivations for collecting range far and wide for the couple. Before retiring, they both worked for the furniture design company Knoll—she as an executive and he in the technical resources end of the business. But the furniture collection’s gestation can be traced to the husband’s childhood. He grew up around antiques and the furniture made by his father, a skilled craftsman. But as a teen he became enamored of modern furniture and asked his parents to give him two Marcel Breuer–designed Wassily chairs upon graduation from high school. Inspired by bicycle handlebars, Breuer pioneered tubular steel furniture in the 1920s while at the Bauhaus. His distinctive Wassily chair was named after his friend and colleague at the Bauhaus, Wassily Kandinsky, and it represented a spare distillation of a club chair’s structural elements.

So it was perhaps destiny that this husband and wife (a kindred spirit when it came to midcentury furniture) landed jobs at Knoll, which produces the Wassily, and other chairs in their collection. These include Brno dining chairs designed by Ludwig Mies van der Rohe and Lilly Reich, Eero Saarinen’s Womb chair, stools by Harry Bertoia, and Le Corbusier’s LC2 lounge chair (developed with Pierre Jeanneret and Charlotte Perriand for the Salon d’Automne in 1929). “It’s the timelessness of those designs” they admire, she explains. “The attention to detail is wonderful, and it looked as beautiful, as clean and simple yet warm, in our old house as it does here.”

The old house was actually really old—a 1710 stone farmhouse elsewhere on the same property, which originally encompassed sixty acres until the couple subdivided it. Despite the traditional, historic nature of most of their collections, they realized they would work in a modern setting when they visited a friend in Florida who owned a weathervane collection. The pairing of old and new came as an inspiring revelation. “The weathervanes were so unexpected and so beautiful, especially for a contemporary space,” the wife recalls. “We realized our weathervanes lent themselves to any sort of design.”

So they retained ARO to create a modernist house on a rise of land overlooking a meadow and stream. Principals Stephen Cassell and Kim Yao used the collection as the central organizing scheme of their design by creating a long gallery, a kind of spine of the home, to display a selection of the weathervanes.

Weathervanes have long been highly collectible. The current record holder for most expensive ever sold is a late nineteenth- or early twentieth-century gilt-copper figure of a Native chieftain by J. L. Mott Ironworks in New York. Sotheby’s raked in $5.84 million for it in 2006.

Yet provenance has never been paramount to this couple. “We have always bought what appealed to us, not for the story behind it,” the wife explains. “It’s interesting to research them. But for us, it was about the patina. We love the form of the ram, for example, but the patina on the one we have is just beautiful. At first, I liked the goldleafed weathervanes, but as time went on, I grew to like the cast-iron ones.”

“It’s amazing how many of them have bullet holes because kids used them as target practice,” adds the husband. The collection really grew when they hooked up with a dealer through whom they acquired weathervanes until he retired from the antiques business. “It was like having our personal drug dealer,” the husband jokes.

ARO also found ways to organize other collections that both eliminated the sense of visual clutter and highlighted their breadth and depth. The ruby flash glass is stowed in a cabinet (“so everyone doesn’t have to suffer,” the wife says with a laugh), which can be easily opened for display. “It always made us sad that they had names and dates on them and the children of the owners just gave them away,” she adds. “Of course, that’s what our kids will probably do. But we felt like we were saving something.”

Roseville pottery is arrayed on shelves in the study (below the aforementioned colonial candlesticks). The origin of this collection was a weekend cabin they bought while living in Atlanta. They haunted antiques shops and flea markets for site-appropriate objects, happening on Roseville pottery sporting pine cone motifs. “We knew nothing about it,” says the husband. “We found out Roseville had hundreds of pine cone designs. Once you have a few, you start buying one of every pattern ever made.”

Fortunately, he points out, “It was in the early days of eBay, when people were selling lots of affordable antiques online.” Though it never really figured into their own acquisitions, they learned certain glazes are more collectible than others. Blue, for instance, is more highly prized than brown or green. They also began building a collection of old trophies and presentation bowls and urns (today gathered mostly in a hallway niche) around that time.

As for the quilts, she explains, “We just love sleeping under quilts.”

That’s just what collectors do, because, in essence, says the wife: “We like to be surrounded by these things. We like the way they feel, and the way they make us feel.”