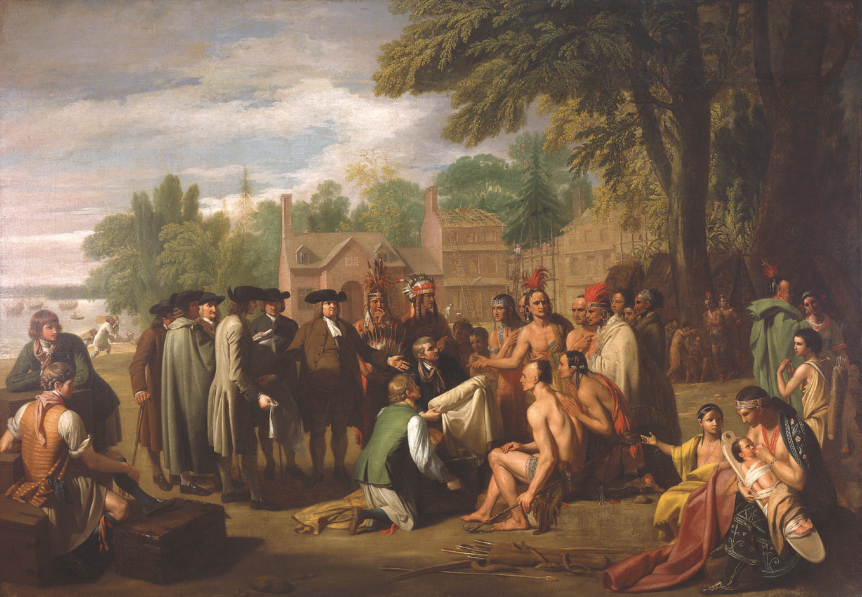 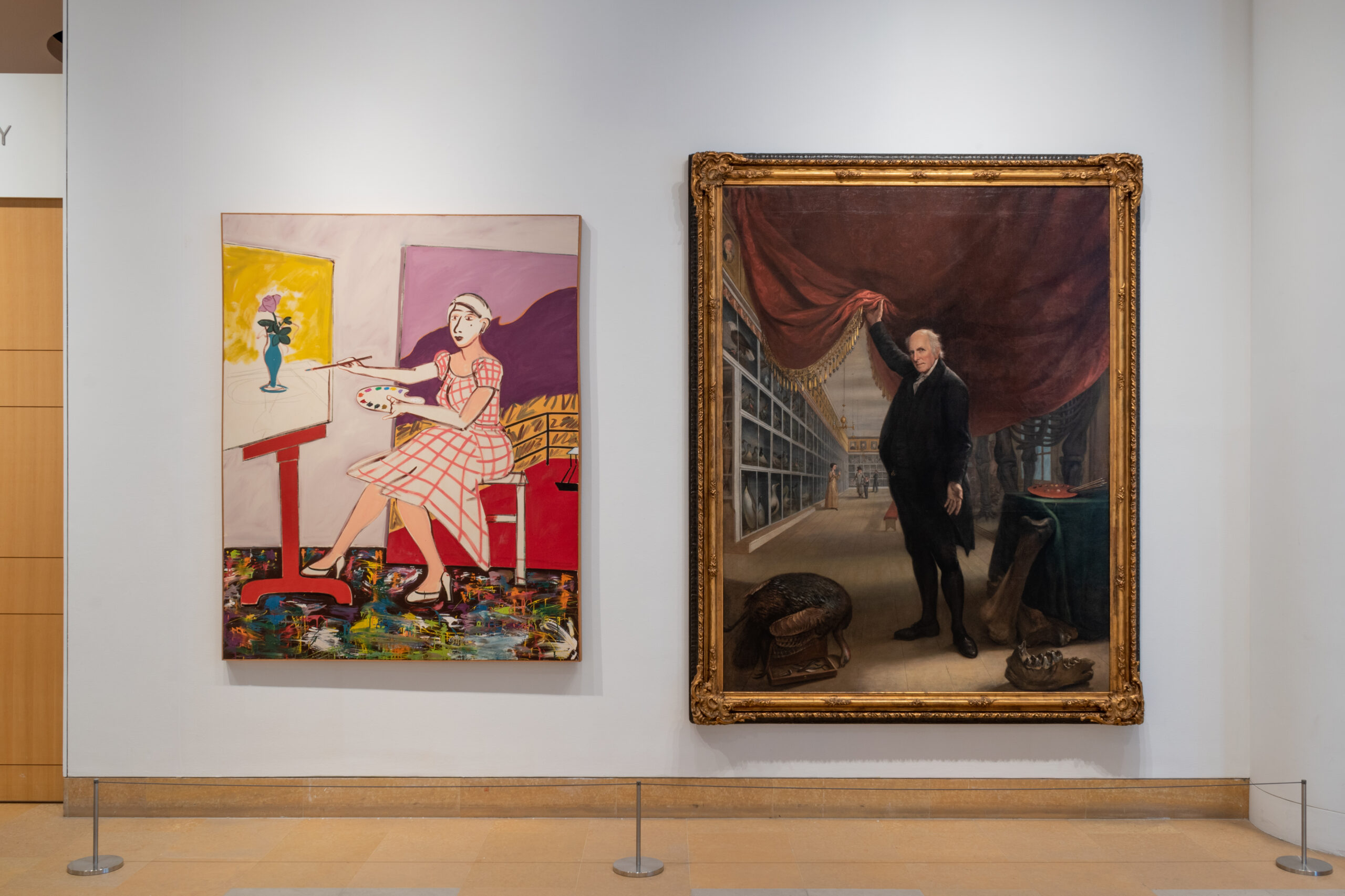 Big things are afoot at the Pennsylvania Academy of the Fine Arts, this country’s first museum and school of fine arts, very big things. Earlier this year PAFA’s permanent collection of American masterpieces (totemic works by artists such as Charles Willson Peale, Benjamin West, and Thomas Eakins, along with many by women and African Americans that PAFA was early to acquire) was removed from its landmarked Frank Furness building to make way for Rising Sun: Artists and an Uncertain America. That exhibition of contemporary works sponsored by the Pew Center for Arts and Heritage will be mounted at year’s end in conjunction with Philadelphia’s African American Museum.

A radical move to be sure, but before that show opens and before PAFA’s new president, Eric Pryor, takes the institution and the public on an ambitious journey into the arts, something no less startling is already happening in the sleek galleries of the museum’s Hamilton Building, where many of its greatest hits have migrated. Making American Artists: Stories from the Pennsylvania Academy of the Fine Arts, 1776–1976 may sound traditional, but you are in for a major attitude adjustment when you visit. 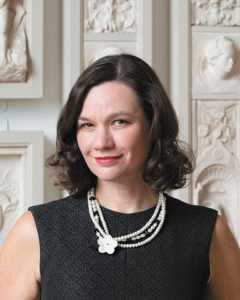 Anna Marley. Photograph by JEH Creative (right). All photographs courtesy of the Pennsylvania Academy of the Fine Arts, Philadelphia. 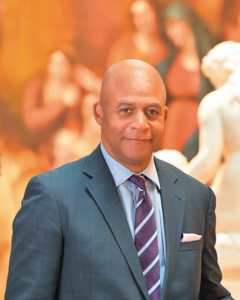 The Pennsylvania Academy of the Fine Arts’ president and CEO, Eric Pryor, and Chief of Curatorial Affairs and Kenneth R. Woodcock Curator of Historical American Art

I arrived as the show was being installed and walked around with its curator, Anna Marley, a museum professional whose careful demeanor, scholarship, and long history with PAFA are a perfect cover for someone who is prompting surprising observations about art history and the museum experience.

I could not see everything in Making American Artists, but what I could see was revelatory. After you enter and pass a row of handsome portraits by, and of, a variety of Americans neatly arranged without hierarchy of size, fame, or anything else you arrive at the show’s opener: Charles Willson Peale’s The Artist in His Museum (1822) hanging next to Self-Portrait (1977), an obscure, sly, and satirical painting by Joan Brown, a California artist I didn’t know who might well have titled her painting Portrait of the Artist as Demure Painting Lady.

After my initial shock at this audacious pairing, I began to think about the Peale. The artist was old, eighty-one at the time, his dominion unquestioned as he raised the curtain here on earthly history (with the presentation of the mastodon and the idea of extinction) and art history. His magisterial pose is thrown into relief by the distance between it and the self-mockery of Joan Brown, improbably dressed and painting a dainty flower with a wild disarray of oil paints at her feet. 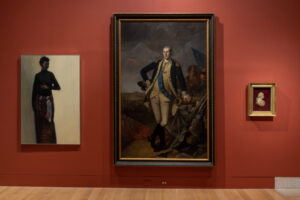 We are not here to measure Peale by Brown or vice versa. Nor is this an exercise in sentimental egalitarianism. It’s the vast space between the two paintings, where history and women’s history flows in, that you are left to ponder . . . where works of art can tell us something beyond ranking. Instead of lecturing us about what to admire in this exhibition, we are sent on a journey through American art history that is, I think, meant to turn us from viewers into participants.

Step into the next gallery and find an interesting trio, one that again reminds me that we have been too long obsessed with hierarchical judgments at the expense of the experiences that art can foster. Here Peale’s George Washington at Princeton (1779) occupies a wall with a wax relief of Washington attributed to that early American cutup, the sculptor Patience Wright (c. 1784–1786), and an arresting self-portrait, Brother James by James Brantley (1968).

I hope there will be a wall label introducing the public to Wright, this country’s first professional sculptor, who made her way against stiff odds, while also making herself something of a nuisance. “Queen of sluts,” Abigail Adams unkindly called this heroic artist, who, as you will see, knew as much as Peale about how to limn a hero. 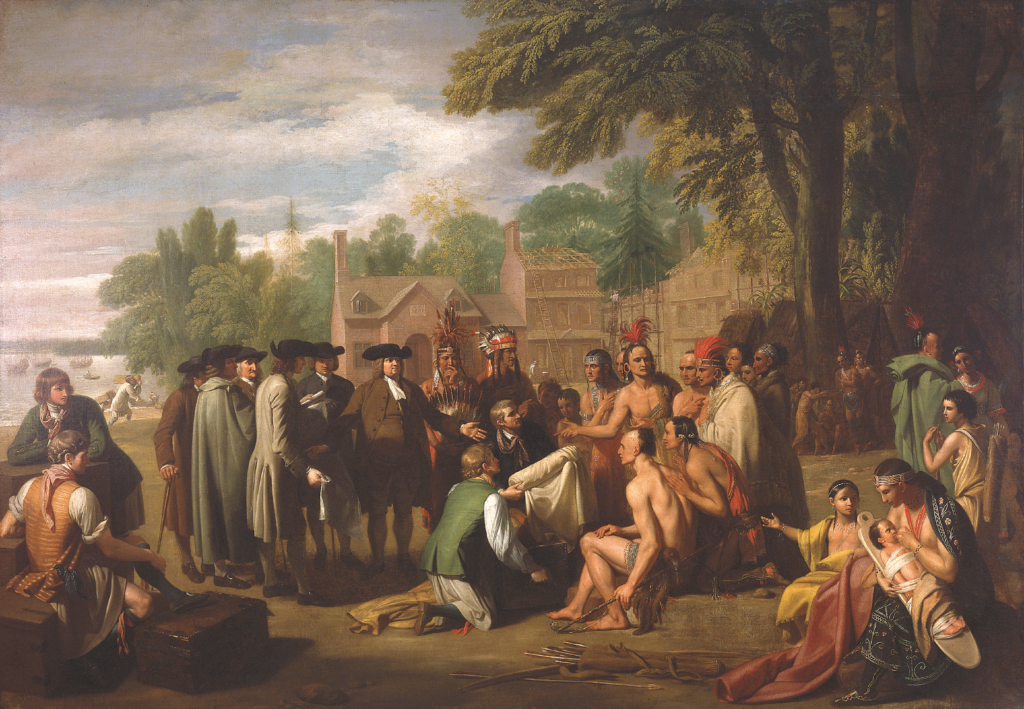 But who is James Brantley and why is he in this trio? Why not? Like several artists here, Brantley is African American and a PAFA graduate. The ambition, scale, and arresting pose of his self- portrait made me happy to make its acquaintance. This is not a didactic arrangement nor is it an argument; the trio is simply surprising enough to prompt more than one look at all three works, and perhaps to see the pose of Peale’s Washington afresh. You might be grateful for that. 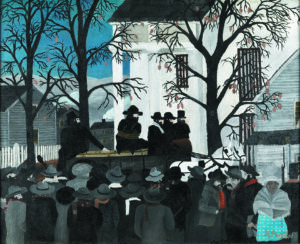 Not all of Making American Artists is arranged to highlight such novel conjunctions. For the most part its five conventional categories—portraits, history, landscape, genre, and still life— just tick along and let the surprises emerge more casually. In the history section, for instance, the pairing of Benjamin West’s Penn’s Treaty with the Indians (1771–1772) with Horace Pippin’s John Brown Going to His Hanging (1942), is not one you are likely to see in your art history books, but it makes sense, goes deep, and trusts viewers to do the same. That’s a lot of respect for the pub- lic, a risk PAFA has been willing to take.

When Making American Artists travels to museums across the country after it closes in April of next year, visitors will not only see the museum’s greatest hits, but also the work that PAFA has done to educate, collect, and promote women and African American artists. What they will not see are works by Native Americans, something Anna Marley recognizes as especially regrettable. That is a bit of history to be pondered while PAFA stands as a beacon—for what it has done, as well as for what remains.