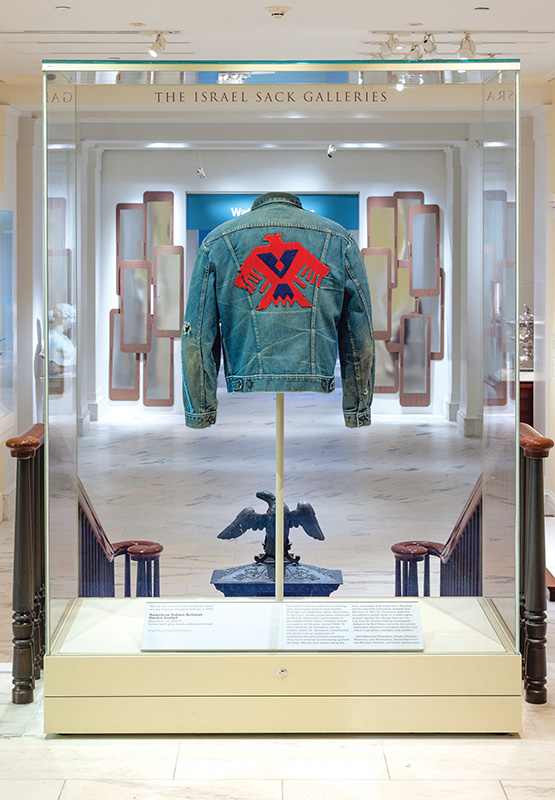 “How could Indians hold themselves apart, when the vanquishers sometimes held their arms out, to crush them to their hearts, with something like love?”

It’s a good question and one that came to mind as I considered Water Memories, a small jewel-like exhibition seamlessly attached to the Art of Native America galleries in the Metropolitan Museum of Art’s American Wing. The answer? Begin by sidestepping the vanquishers who might otherwise crush these objects with the kind of formalist praise and presentation that severs them from all that they have to say and do—and they have a great deal to say and do. That, it seems to me, is what Patricia Marroquin Norby (Purépecha), the museum’s first curator of Native American art, has done with Water Memories as well as with her ongoing improvisations in the Art of Native America: The Charles and Valerie Diker Collection. We have left the crushing embrace of the museum’s Rockefeller Wing far behind.

If there is a political current in Water Memories, and there is, it flows effortlessly alongside history, culture, and artistry from the moment you enter and encounter a denim jacket bearing emblems of activism inspired by the All Tribes occupation of Alcatraz Island from late 1969 into 1971. Positioned just above the Israel Sack Galleries, the jacket, with its rivulet of blue beads symbolizing water and its embroidered red Thunderbird, looks out over a Lannuier dressing table and the museum’s other classical American treasures towards the entrance to Water Memories. There, mirrored panels similar to those deployed at Standing Rock in November 2016 to protest the Dakota Access Pipeline’s destruction of Native land and water, give you a glimpse of yourself to consider before going further. It’s a bold move, starting things off like that—quiet, uncompromising, and inviting. It pays off.

Once inside, the visitor moves back and forth between what were traditionally considered purpose-made pieces—baskets, bowls, moccasins—and contemporary works, including a captivating video titled River (the Water Serpent), shot by drone and showing protesters carrying mirror shields in a serpentine procession at Standing Rock. This, too, is, of course, a purpose-made work. So is BREACH Logbook 22/Breach #2 by the Shinnecock artist Courtney M. Leonard, a magnificent pile of ceramic shapes resembling whale teeth atop a wooden palette that brings nearly every visitor to a halt, inspiring them to add understanding to awe: the Shinnecock were ocean harvesters and their way of life on what is now the Eastern End of Long Island was eventually destroyed by the whaling industry. It’s an elegiac piece, but its power and ingenuity give it a vigor far beyond that.

There is, in this small exhibition, a great deal to learn and consider. The wall labels help. As with the Diker Collection, Indigenous community members have been invited to provide the kinds of commentary that connects history, economics, artistry, and spirituality, joining past to present without the customary hierarchy. There are, for instance, a number of nineteenth-century canoe models made for children or for the tourist trade that speak to cultures in fluid movement rather than ossified; that point is underlined when you look away from them and raise your eyes to the beautiful Feather Canoe hanging overhead, created by Truman Lowe (Ho-Chunk Nation, 1944–2019) in 1993. (I have yet to see a photograph that captures the visceral thrill of Feather Canoe.)

A far less lyrical note is struck by Possession on the Beach, a huge seascape by Fritz Scholder, who was one quarter Luiseño, three quarters German, and never less than confrontational. Scholder put the world on notice that, as far as he was concerned, there were to be no limits on the ways in which Native Americans could and should be represented. Possession is a ferocious work; his winged figure poised here between a bathing beauty and a sand-sniffing dog suggests that the spirits of the sea will not be domesticated either. At least that is part of what this figure portends.

Thus far I have ignored a small but significant tributary in the exhibition—the presence here and there of non- Native works, among them paintings by Arthur Dove (Reaching Waves, 1929) and William Merritt Chase (At the Seaside, c. 1892), early photographs of the upper Mississippi by Henry P. Bosse (1844–1893), and a collection of whale oil lamps. There are a number of ways to experience these inclusions, but taken together they suggest something more than a conciliatory note, a tie linking everyone for whom access to safe water must be more than a memory.

Water Memories flows quite naturally into the Art of Native America, which never fails to astonish with its changing representation of more than fifty civilizations. This time, though, I was captivated by two elaborate Jingle Dance dresses, one from the 1930s, the other from 2022, part of a tradition stemming from the 1918 flu epidemic, that speak to each other and to us of both resilience and joy, and, as with Water Memories, of continuity.

Just before you exit Art of Native America and emerge into the Charles Engelhard Court you will encounter a powerful example of an Indigenous artist who has disarmed the dangerous embrace of the “vanquishers” by arresting the past. It, too, is by Courtney L. Leonard and takes one part of its title, Contact 2,021, from the historic encounter, and the rest from the year Leonard began the piece as well as the 2,021 times she pressed her thumb into tiny bits of clay— evocative of both shell beads and of Dutch pottery—which she then fired and tied to a canvas map. Contact indeed. Just when I had worried that contemporary art was at a dead end, or had grown tired of being art, I found this thrilling work.