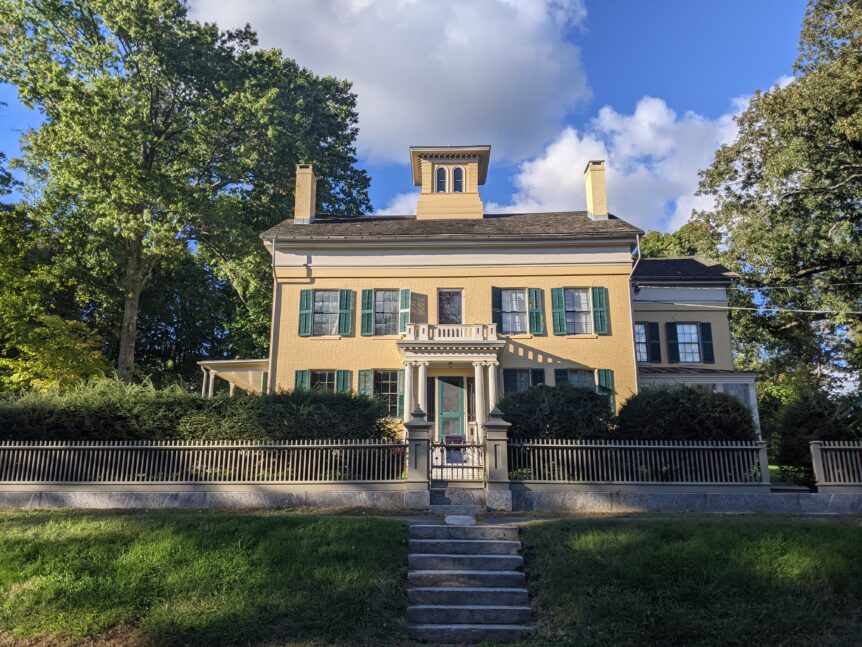 A Visit To The Newly Restored Emily Dickinson Museum In Amherst 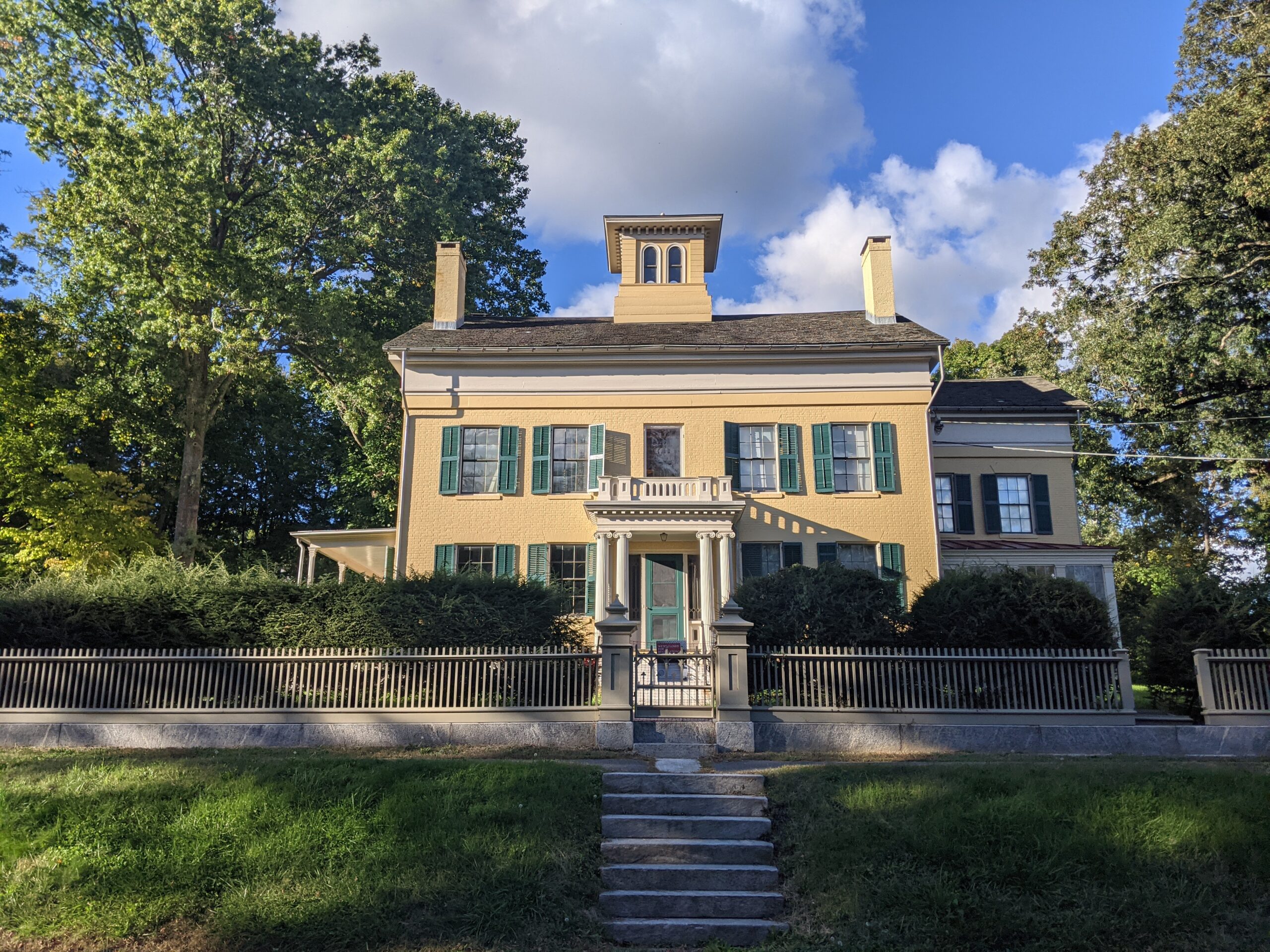 Emily Dickinson’s butter-colored brick home in Amherst, Massachusetts, began drawing the curious long before her enigmatic poetry appeared in print. What some early visitors most wanted to glimpse was not the pale, elegant, reclusive author, scribbling on paper scraps at her tiny worktable, and wondering when death would kindly stop for her. They just came for the floor coverings.

The parlor’s Brussels carpeting with flower basket motifs “enjoyed a reputation of its own,” Emily’s niece Martha Dickinson Bianchi recalled in a 1932 memoir.* Martha wrote that in mid-November 1882, when the funeral of Emily’s long-invalided mother was held at home, “two old ladies came an hour ahead of the service” just to admire the luxurious carpet in the empty room, “before the mourners broke up the pattern.”

This summer, wool bouquets have been unfurled underfoot again at the Emily Dickinson Museum, as part of a multiyear restoration of the several buildings on the three-acre compound. The staff has re-created the Dickinsons’ lively palette based on archival wisps, architectural ghosts, and family heirlooms, incorporating Victorian furniture donated by the makers of Apple TV+’s Dickinson comedy series, which ran from 2019 to last year. Emily’s writings have also inspired the decor. In every room, household objects allude to lines in her poems. 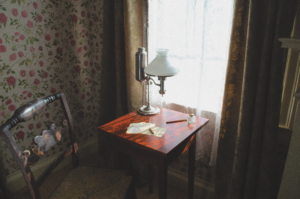 The poet’s gabled, cupola-topped house, known as the Homestead, was built in the early 1810s and expanded in phases thereafter. It passed through the hands of just one non-Dickinson owner, the Parke family, before Amherst College acquired it in 1965. The museum, which opened in 2003, also includes the Evergreens, an Italianate villa that Emily’s brother Austin built next to his childhood home in the 1850s. (Now closed for restoration, the Evergreens’ decor has changed little since Austin’s daughter Martha died in 1943.)

The Parkes, in renovating the Homestead, re-used or tucked away historic architectural elements that have aided the recent restoration work. The family dismantled the ground-floor conservatory where Emily grew heliotropes and jasmine— Martha described the space as “a fairyland at all seasons”—but saved its twelve-over-twelve-pane windows, which now have been used to reconstruct the conservatory on its original footprint. The Dickinsons’ front door, with Eastlake bronze hardware incised with palm-frond and fretwork patterns, has been retrieved from a garage. The Parkes’ whitewashed colonial revival staircase contained much original wood, and a snaking new walnut banister rests on turned balusters that once brushed against Emily’s signature white gowns. 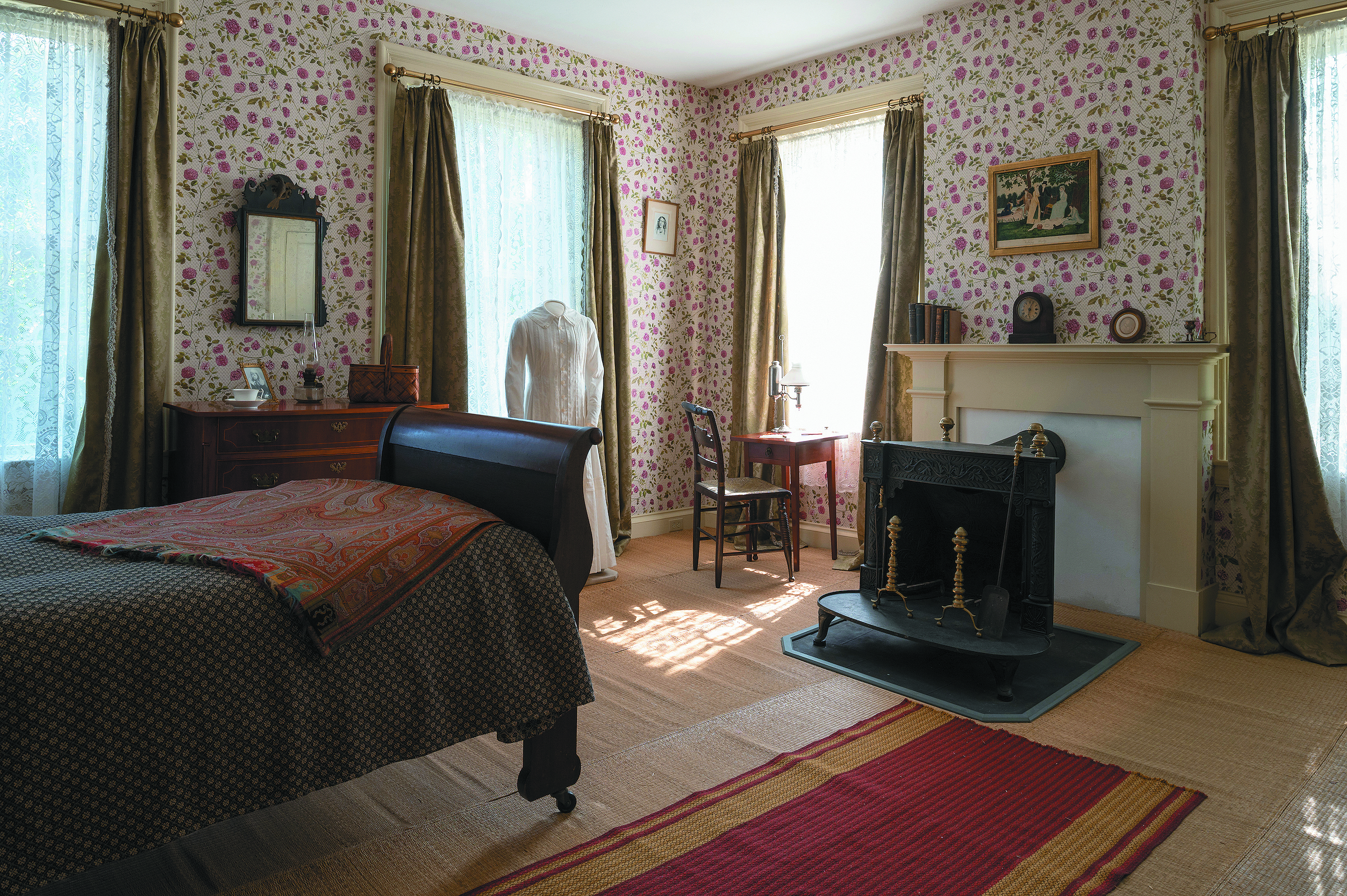 West bedroom at the Homestead, used by Dickinson. Crispin photograph.

For the parlor, the British firm Grosvenor Wilton supplied a new floral carpet in purples and blues, based on one of the company’s 1840s patterns. The parlor walls, which Martha remembered as “white with large figures,” have creamy cartouche motifs printed by Adelphi Paper Hangings in upstate New York, modeled after 1850s originals at the Farnsworth Homestead in Rockland, Maine.

English porcelain cups used by Dickinsons, austere white with gold rims, are on display in the parlor near the family’s etched cranberry glass sherry set—placed as a nod to Emily’s comparison of her lustrous dark eyes to “the Sherry in the Glass, that the Guest leaves.” Visitors are encouraged to play the parlor’s recently donated mid-nineteenth-century piano, made by Hallet, Davis, and Company, the Boston manufacturer of Emily’s instrument (which is on view at Harvard’s Houghton Library).

The Belle of Amherst’s bedroom is still equipped with her black cast-iron stove, ornamented with Ionic pilasters. Roses and flowering vines course through the room’s new wallpaper, which Connecticut-based conservator Marylou Davis based on sooty fragments found near the ceiling. A sienna paisley shawl worn by Dickinson is folded atop her mahogany sleigh bed— one of her poems lists creasing her shawls among “Life’s little duties.” On a replica of her cherry worktable, a cylindrical oil tank is attached to a silver-plated lamp from the early 1880s, manufactured by the German Student Lamp Company. It is not the one she used while often writing about light and vision, but she likely owned the maker’s products. She used a slip of paper from the lamp company—a warranty on its wares—to pencil the poem “Oh give it Motion—deck it sweet.” 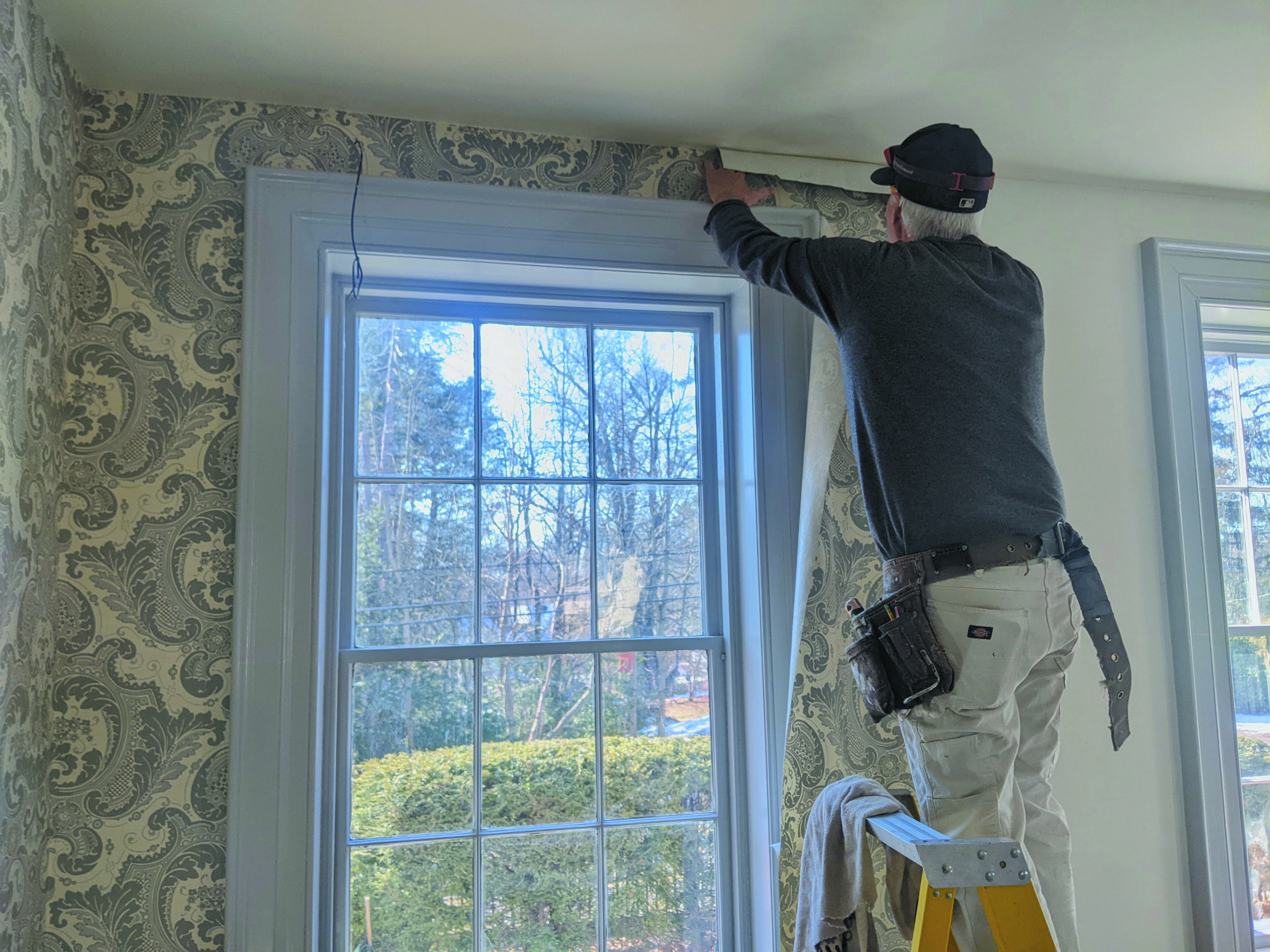 Wallpaper from Adelphi Paper Hangings being installed in the south parlor. Fecher photograph.

In an adjacent bedroom, where Emily tended to her mother, the museum has installed a honey- colored four-poster bed with plump spherical finials, which was donated by Apple TV+. (It is nicknamed “Hailee’s bed,” after Hailee Steinfeld, the actress who played Dickinson’s title character.) The room’s ceramic washbasin and water pitcher are printed in cobalt with scenes of the Erie Canal, an engineering wonder that Emily never saw. “Travel through transferware,” Brooke Steinhauser, the museum’s program director, observed during my tour in mid-September. 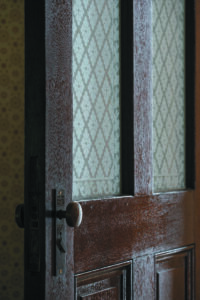 I roamed the building and grounds for hours, looking at everything through the lens of Emily’s verses. In the foyer, now paved in Marylou Davis’s glossy crimson floorcloth (she modeled its floral grid on a fragment found underfoot in an Evergreens closet), I wondered where Emily had imagined that “The Angels bustle in the Hall—Softly my Future climbs the Stair.” In the library, a long-missing marble fireplace carved with grapevines has been simulated in whitewashed wood, and somewhere in that room, Emily realized, “There is no Frigate like a Book.”

In the gardens where hollyhocks kept Emily “very busy picking up stems and stamens,” acorns were falling from a nineteenth-century oak that witnessed her taking notes “when the Squirrel fills His Pockets.” I pocketed three broken acorn caps, tossed aside by sated squirrels, as talismans for writing this article well.