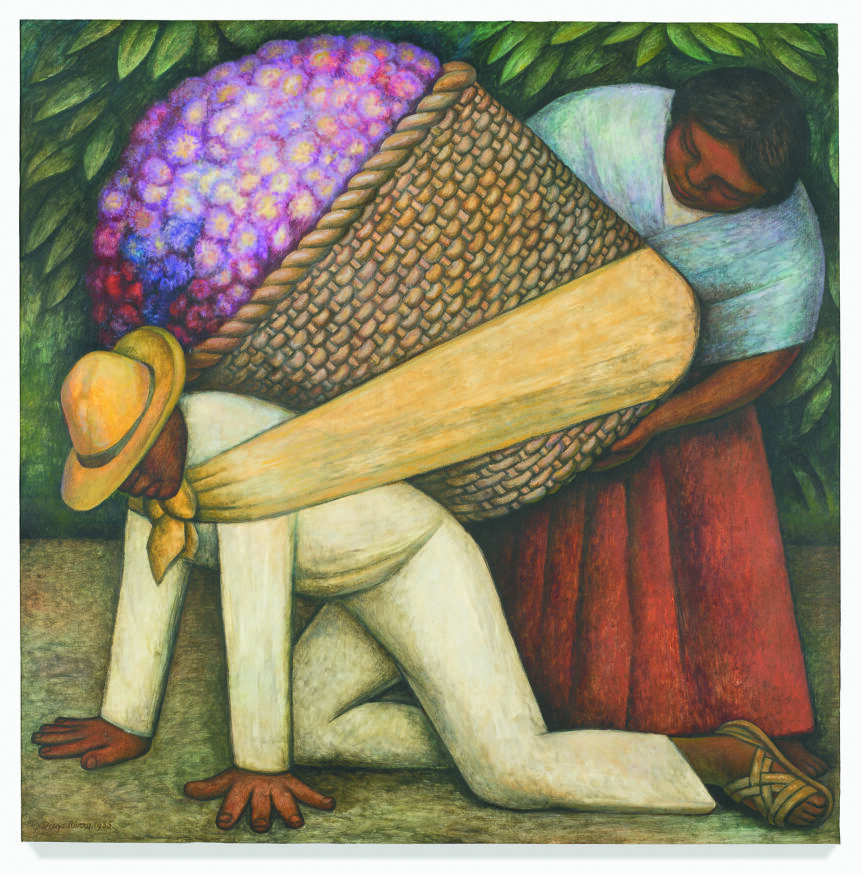 The paintings of Diego Rivera bring to mind something that Dr. Johnson once said about John Milton, that he was “a genius that could cut a Colossus from a rock; but could not carve heads upon cherry-stones.”1 That assessment, though woefully wrong with regard to the English poet, is an excellent entrée into the work of the Mexican muralist, the subject of a new retrospective at the San Francisco Museum of Modern Art. An intermittent Communist, Rivera once signed a manifesto proclaiming: “We condemn as aristocratic all the so-called easel painting and art of the ultra-intellectual clique!”2 Rivera did indeed create small easel paintings, some of them very good, but he seemed most himself when conjuring entire worlds into being across the expansive walls of a great public building.

By its very nature, this new exhibition, Diego Rivera’s America—the most extensive examination of the artist in twenty years—is forced to emphasize his smaller, more portable works over those great and immovable murals that were the main fruits of his genius. Focusing on Rivera’s work in the United States from the 1920s to the 1940s, the show tells its tale in more than 150 drawings and easel paintings, while resorting to large-scale film projections to give a sense of the ambitious murals that Rivera conceived for New York, Detroit, and Mexico City. Only the great Pan American Unity mural, painted on ten moveable steel-framed panels for the 1940 iteration of the Golden Gate International Exposition on Treasure Island (Fig. 6) and later transferred to what is now the City College of San Francisco, appears in the exhibition itself (Fig. 1). 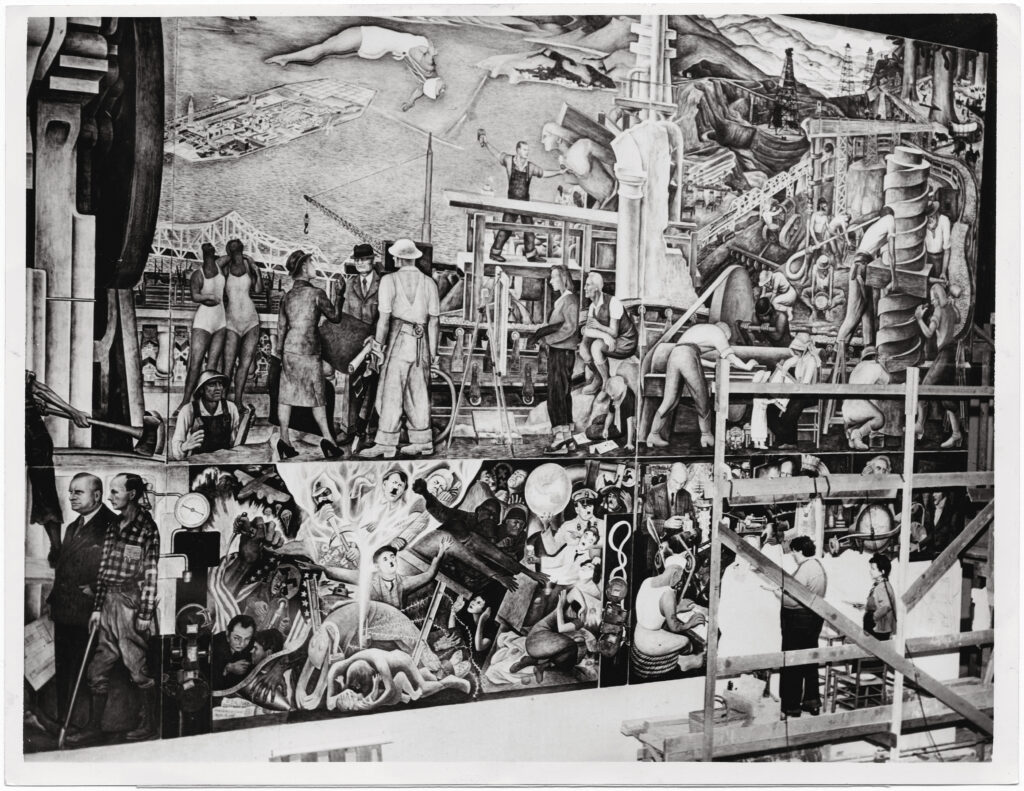 The title of the show is fraught with irony and ambiguity. Rivera, who was born in Guanajuato, Mexico, in 1886 and died in Mexico City in 1957, considered himself a proud American, but, crucially, he used that term very differently from most of our compatriots. When Latin Americans refer to the citizens of the United States, they tend to call them los norteamericanos, to distinguish them from their own populations. In much the same spirit, Rivera wrote in 1931: “I mean by America the territory included between the two ice barriers of the two poles. A fig for your barriers of wire and frontier guards!” If there was any difference between Texas and Tabasco, Diego Rivera did not acknowledge it. 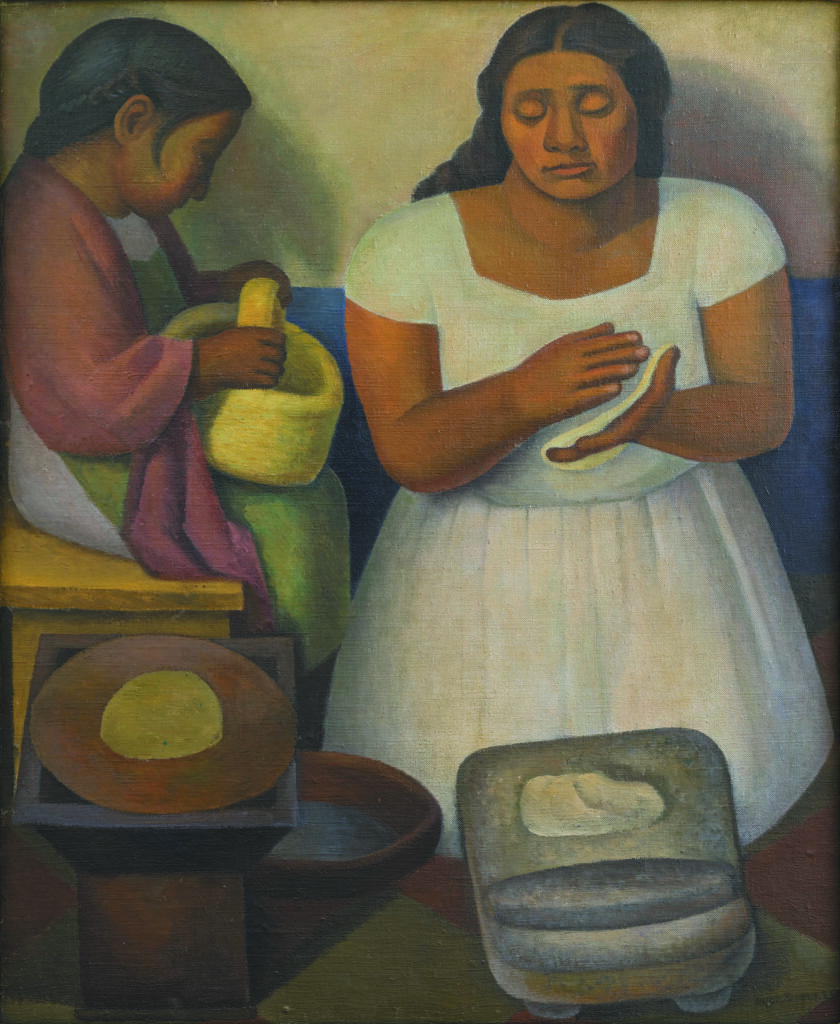 In Rivera we find none of that constant devotion to pure form and pigment, to arte puro, that is traditionally associated with the modernist movement. Seven or eight fundamentally opposed artistic personalities clamor for precedence in his work: the Paris-trained vanguardist, the Mexican peasant muralist, the Gringo positivist muralist, the surrealist, and several others besides. Rivera can turn on a dime from hieratic near abstraction to rushed and perfunctory forms that are propagandistic in their spirit and legibility; from broadly schematic figuration to a fastidious record of the observable world.

Despite his officially stated antagonism to “the so-called easel painting and art of the ultra-intellectual clique,” Rivera spent more than a decade, from 1907 to 1920, first in Madrid, where he painted many fine late symbolist landscapes, and then in Paris, where he gave himself up to the then regnant style of synthetic cubism. By the point in his career when the San Francisco exhibition takes up the tale, however, starting in 1921, Rivera had left Europe behind, and its “ultra-intellectual” art as well. And yet The Tortilla Maker (Fig. 3) or The Flower Carrier (Fig. 4), both depicting scenes of Mexican life, can hardly be taken as evidence of Rivera reverting to his cultural roots. His generally proletarian subjects are specific to Mexico, but one has the vivid sense that Rivera, having returned from Europe imbued with the habits and attitudes of the Continent, invented out of thin air a useable, but ultimately artificial Mexicanness: his big-boned archetypes correspond to nothing in earlier Mexican art, either before or after the arrival of Cortez. 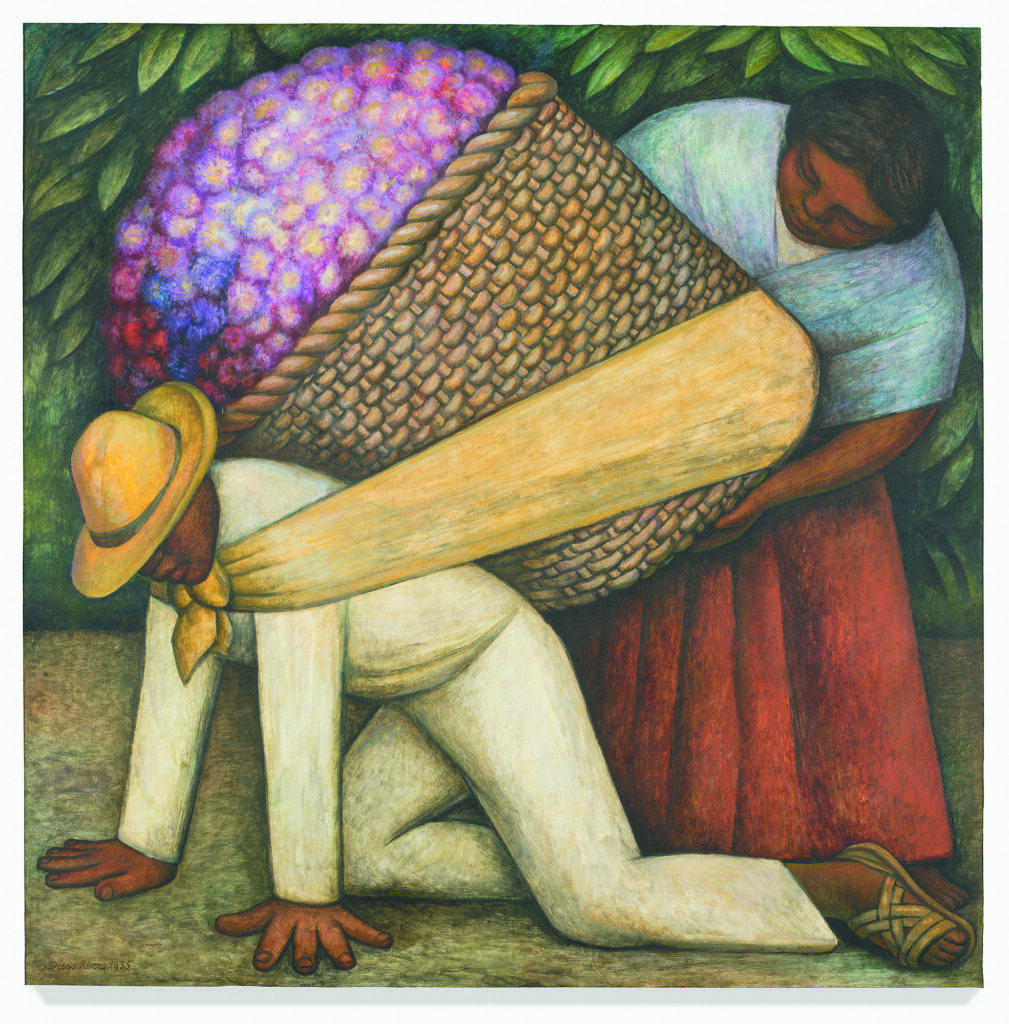 At the same time, throughout the period covered by the present show, Rivera could easily slip back at any moment into a more Eurocentric idiom, especially in his decidedly non-proletarian portraits of such captains of industry as Edsel Ford and in his fine depiction of Lupe Marin (Fig. 5), the second of his four wives. By virtue of its eye for detail and its singing line, Rivera’s expert pencil portrait Mr. and Mrs. Ralph Stack-pole (1926) recalls the finest drawings of Picasso’s Ballets Russes period. 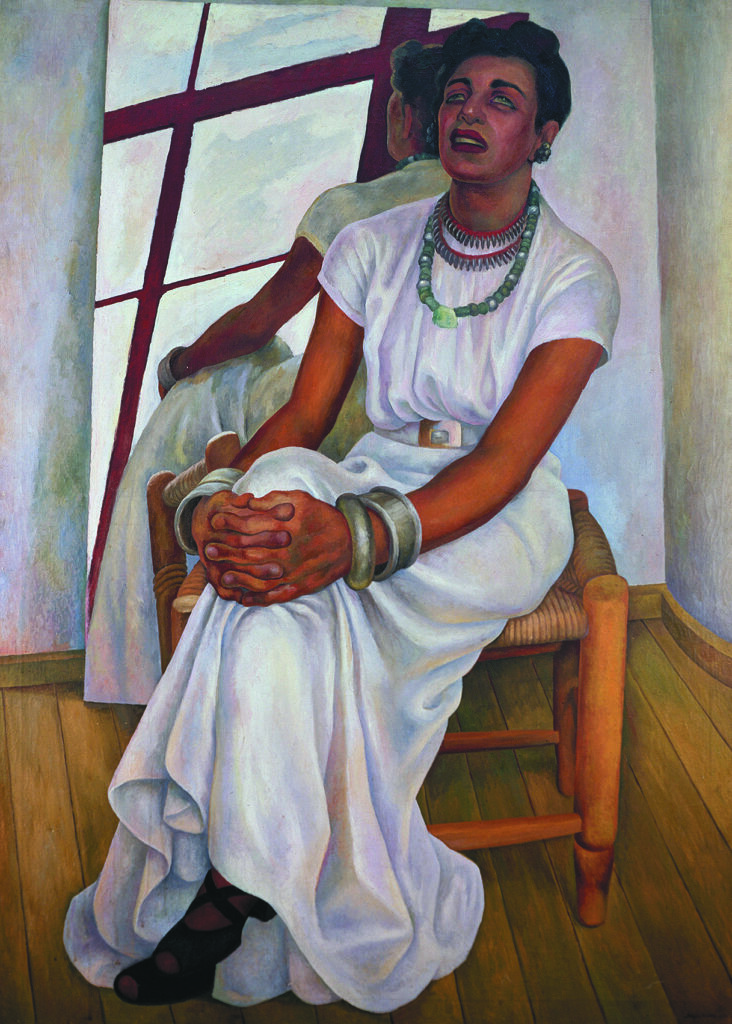 But it is Rivera’s murals, of course, that constitute his most enduring contribution to art history. One of the greatest of them is Pan American Unity—its formal title is The Marriage of the Artistic Expression of the North and of the South on this Continent—which will be on view at SFMOMA for the duration of the exhibition. Few other works of Western art, and few other murals by Rivera, exhibit such a degree of maximalist, all-conquering fullness. Only the Gothic portals of Chartres and Amiens, with their serried ranks of saints and sinners, can approach this pitch of saturated plenitude. Arranged, like so many of his murals, according to a fairly strict bilateral symmetry, its phantasmagoric, Technicolor expanse brings together hundreds of figures and themes from across ten centuries and two huge continents, ranging from the Aztecs to the Inuit, and from Simon Bolivar to Henry Ford holding a fuel pump. Abraham Lincoln and Thomas Jefferson rub elbows with Frida Kahlo and Dolores del Río, while Adolf Hitler and Heinrich Himmler meet an inglorious end under the supervision, it would seem, of Charlie Chaplin and Edward G. Robinson. In this work, no less than in his great murals in Detroit and Mexico City, Rivera is like some latter-day Gargantua who ingests the world only to belch it back at us in the form of an exquisitely ordered art. 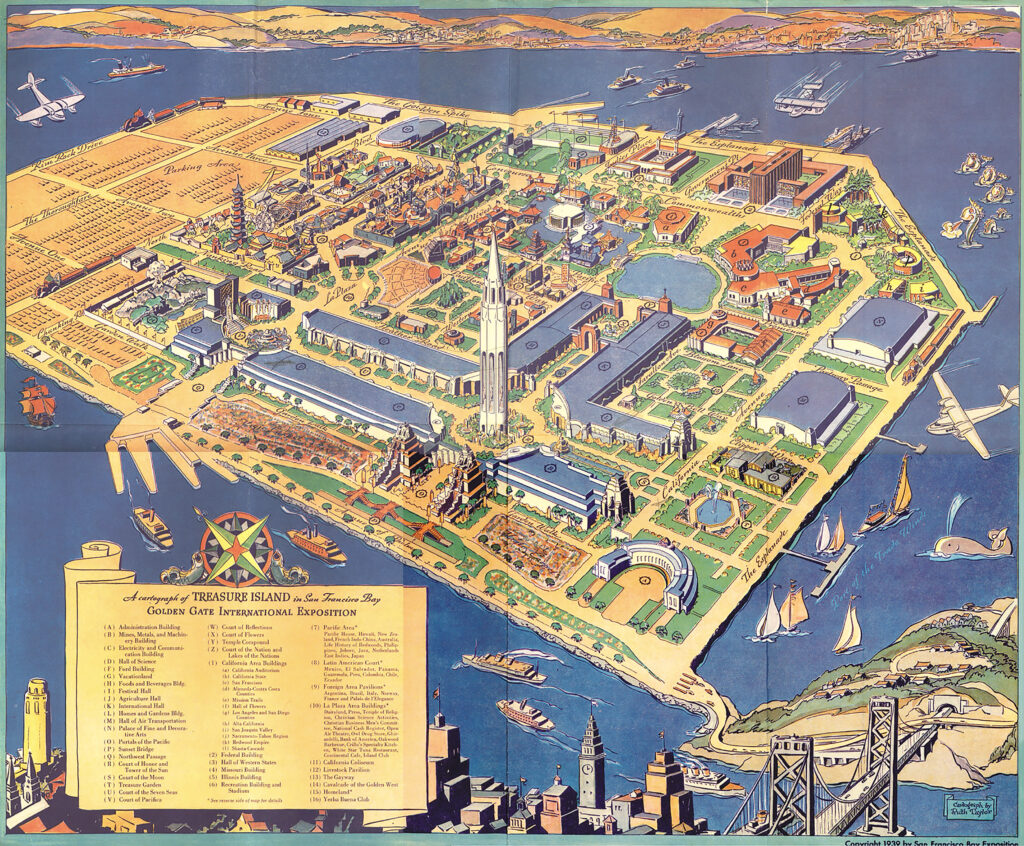 For many years following Rivera’s death, the mainstream art establishment was not quite sure what to make of him. It defined modern art, according to the dictates of critics like Clement Greenberg, as arte puro—the quest for pure form and especially pure painterliness. That Rivera could be, even according to those criteria, a first-rate painter is clear from the cubist works that he produced in Paris around 1915. But in most of the art on view in the San Francisco show, that purity is missing. The beauty of his later paintings, and especially his murals, must be measured not in square inches but in square yards, in what the paint bodies forth, not in the forms it assumes or in its textural values as it does so. Rivera was not entirely alone among important modernists in rejecting arte puro—several surrealists did so as well—but no one took this conviction as far as he did, or had nearly as much to show for it. 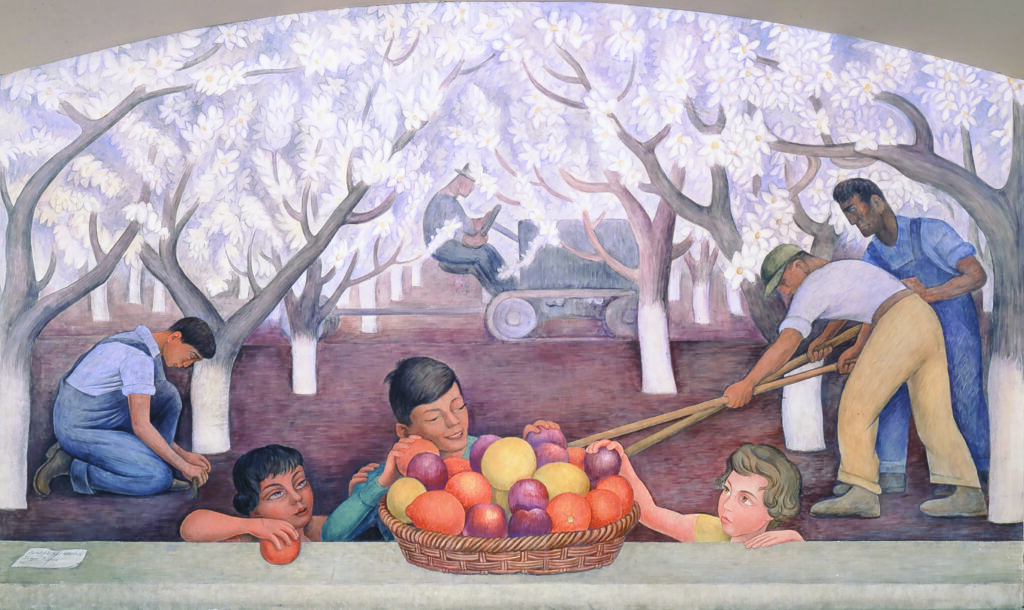 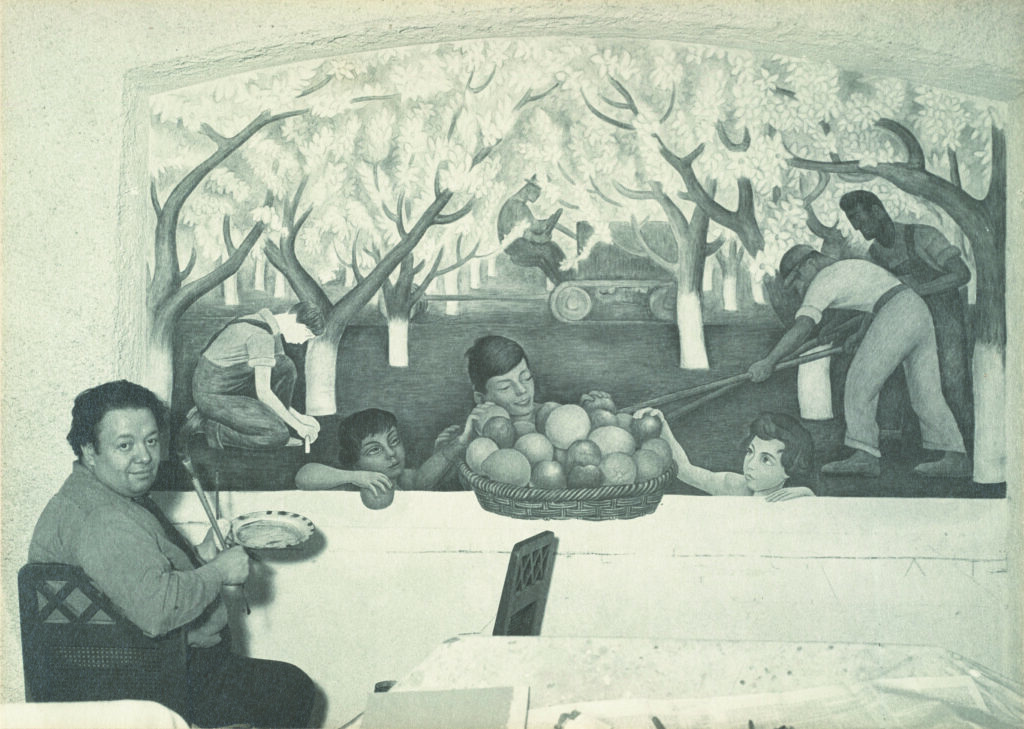 Diego Rivera’s America is on view at the San Francisco Museum of Modern Art until January 3, 2023