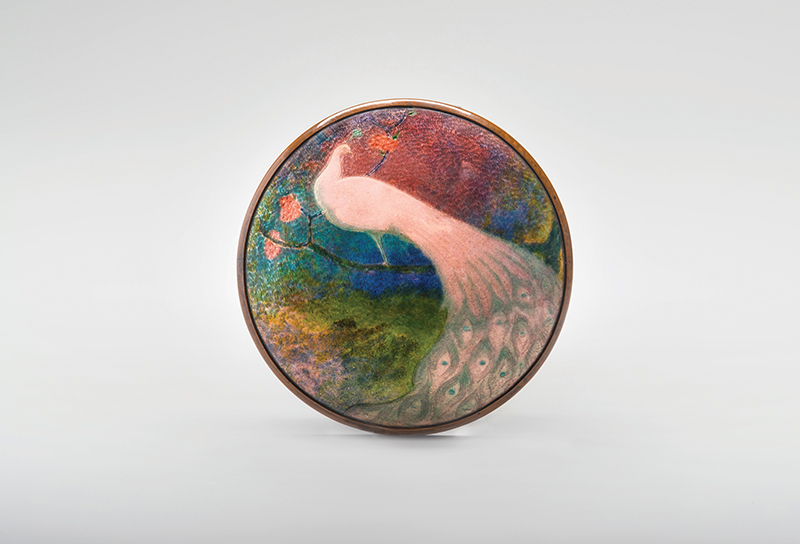 Boxes and small tableware featuring enameled decoration were fashionable in the early years of the twentieth century, when the handmade aesthetics and moral philosophy of the arts and crafts movement were popular. The enameled works from the (mostly female) team at Louis Comfort Tiffany’s enterprise were quickly embraced for their high quality, but several studio artists made a name for themselves as well, especially Elizabeth Ethel Copeland in Boston, Horace E. Potter in Cleveland, and Douglas Donaldson in Los Angeles, while other notable contributions were made by Jane Carson Barron, Frank Gardner Hale, Gertrude Twichell, and Mildred Watkins. Of particular note was the work of Frank J. Marshall, a metalsmith and master enamelist in Boston.

Growing up in Jamaica Plain, Massachusetts, Marshall seems to have received little primary education but learned enameling from metalsmith Laurin Hovey Martin.1 In 1907 Marshall debuted as a member of the Society of Arts and Crafts, Boston, in its Tenth Anniversary Exhibition. Exhibitions at the Art Institute of Chicago in 1910 and 1911—which included jewelry and enameled works by Marshall in a variety of metals, such as boxes in copper and silver—brought awareness of his art to the Midwest. In February 1911 International Studio praised his “enameled metal boxes, which create handsome color notes” in the Fourth Annual Exhibition of the National Society of Craftsmen, in New York.2 The reviewer regretted that more American artisans did not work in a similar style. By 1913 he was named a master craftsman by the Boston society, and focused on elaborate and technically challenging depictions of peacocks, often in sumptuous fantasy landscapes. Along with fellow Boston artists Copeland and Hale, Marshall exhibited at the Little Gallery in New York in 1915.

Collectors of American decorative art from the period around 1900 have been aware of the importance of Marshall’s work. Yet few museums own his work, and the only major exhibition that included it was the American Craft Museum’s The Ideal Home, which opened in 1993, so guidance from museums and publications has been scant. The peak of Marshall’s production is a circular copper box with perhaps the finest enamel plaque known by the artist (Fig. 1). The time of day seems to be early twilight, a moment when lush greens and yellow sunlight can still be discerned, but leaves turn ink-colored as night begins to fall. The plum ground and green vegetation are interrupted by a tree at proper left, with brilliant indigo branches asymmetrically crossing the lid. Suspended from the branches above are elements known on no other works by Marshall, illuminated lanterns vibrantly glowing in iridescent salmon and coral. The plush light of these lamps is uncannily similar to effects in paintings by Maxfield Parrish. The principal subject is a splendid peacock facing “west” with a fastidiously enameled head and plume and breast (warmed by the crimson of the fading sunlight) and, most dramatically, plumage that fills the bottom of the scene with blue and gold feathers. This masterpiece was donated by the Leeds Art Foundation to the Metropolitan Museum of Art in 2016, in honor of Jacqueline Loewe Fowler. A related model seems to depict a scene that has slipped considerably further into the gloaming, evoked by the deeply suffused midnight-blue ground and shimmering golden light transmitted through turquoise and purple skies (Fig. 2). The intensity of illumination remains pronounced in the gleaming pink and green of blossoms and leaves on the dominant tree branches that support the “east”-facing peacock. Marshall’s design roots a tree branch near the center, but this support is deftly attenuated by the moment of the bird’s perch. The fineness of the delicate branches is foiled by the bold shape and brilliant hues of violet, green, and gold giving mass and detail to the bird. An indigo plume stands high above the peacock’s head, erected on a golden stem. The overall achievement is much more than a sum of these aspects, as Marshall skillfully controls subtle undulations of texture and palette, creating a sumptuous and haunting tableau.

Marshall eschewed the brilliant coloration prized in peacock feathers in one remarkable circular plaque showing a white bird, a variant of the Indian blue peafowl (Fig. 3). This box cover depicts the missing pigment, an anomaly that in nature absorbs incident light, giving the creamy translucent effects of diffracted and interference light. The restrained textures and soft palette of the bird are as elusive as such peacocks are in nature, conveying a mystical presence reminiscent of James McNeill Whistler’s symphonies in white. The muted colors of the bird, ornamented only with gray and blue, are vividly contrasted with a kaleidoscope of sparkling planes behind. A green field of grass or other vegetation trails off to lavender at the lower left, either meeting with blooming flowers or reflecting complexities of color from the sunset. The bright green and blue—perhaps a lake or sea—evokes the waning moments of day, with skies above streaked with scarlet and sangria conveying an intense sky at dusk.

Another exceptional circular copper box by Marshall features a novel composition: a peacock and its plumage, the carefully rendered feathers fanning out and covering nearly all of the green field (Fig. 4). The boldness and rigorous unity of this plaque are brilliantly foiled by the shifting ethereal effects of the surface, where the lavish bird both proclaims and hides its presence. A superlative circular box (Fig. 5)—the only known large, significant work in silver (rather than copper) by Marshall—has surfaced only recently. The plaque is decorated with a landscape, but the peacock stands especially boldly upon a tree branch, puffing his breast forward and pulling back his head in a regal stance, with the dramatic flourish of feathers arcing below. From his perch, he gazes upon a gorgeous impressionistic scene of teal, indigo, and lavender with bright peach-colored blossoms. The enameling technique varies, in some areas precisely delineating the scene, in others creating an ineffable feeling. The image is circumscribed with a lovely enameled border of berries and leaves.

Though focused on a singular subject for much of his career, Frank Marshall pushed the traditional boundaries of enameling technique and arts and crafts design, creating a surprisingly rich body of work replete with all the utopian idealism of American art around 1900.